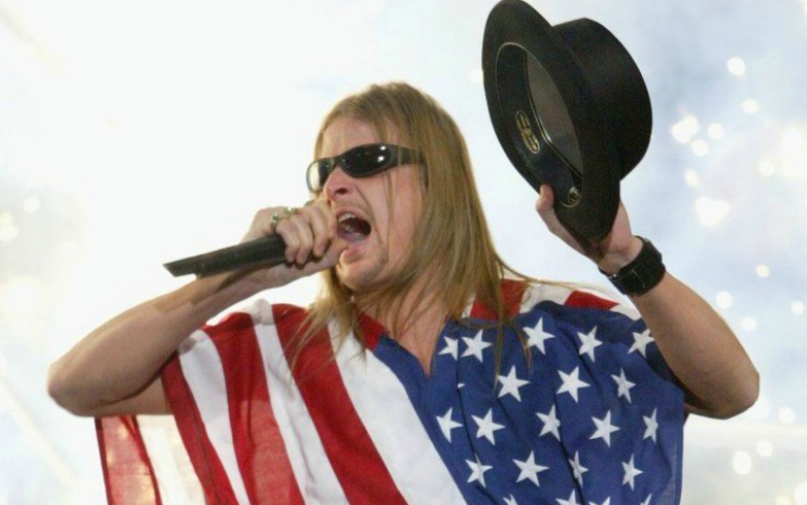 Robert James Ritchie, aka Kid Rock, is currently leaving his Republican primary rivals in the dust and continues to lead Democrat incumbent Senator Debbie Stabenow in the 2018 Senate race in Michigan.

Voters seem to favor Ritchie currently at 48.60% compared to Stabenow’s 46.09%. That lead is well within the margin of error +/- 3.06% determined by the Trafalgar Group (TFG) out of Atlanta, Georgia.

Here’s how it broke down.

According to the survey of 1,078 likely voters released Friday, Ritchie leads his Republican rivals 49.62% to 28.10%. Here are the results.

TFG Senior Strategist Robert Cahaly said, “If Kid Rock does run as a Republican, the nomination is likely his.”

“It would be like racing your personal car against Daytona winner Kurt Busch and giving him the head start,” he added. “He’s going to be doing donuts on the infield while you’re still trying to change your tires.”

“The GOP nomination is wide open if Kid Rock does not run,” Cahaly said.

He then went on to elaborate.

“Epstein, who has been in the race the longest and spent the most money, has a slight lead,” said Cahaly. “James, who’s been in the race for just over a week already, leads Young who entered the race earlier, but whose campaign has gotten off to a slow start. If the Epstein campaign effort to unite Trump voters behind her works and if the James campaign can keep up their announcement momentum, this could be a tight race for the nomination.”

“A general election with Kid Rock and Stabenow could be close and fun to watch,” Cahaly concluded.

“Of course, Kid Rock’s new cd focused on registering voters could impact the canvas on which this election will be painted in ways that can’t be measured at this point,” Chalay continued.

“Regardless the debates would truly be ‘the greatest show on Earth’ and the uncensored version could be a pay-per-view blockbuster,” Mr. Cahaly added.

The Trafalgar Group was recognized as the best polling firm during the 2016 election cycle.

According to Delphi Analytics:

To gauge Ritchie’s chances in a hypothetical general election matchup, Delphi Analytica conducted a poll from July 14-18 of 668 Michigan residents.

These results could indicate that Ritchie is a popular figure in Michigan, Debbie Stabenow is unpopular, or some combination of concurrent trends.

The relatively large, 44%, number of undecided respondents may be due to the early stages of the campaign.

The 46-year-old rocker opened his own website kidrockforsenate.com, where he announced plans Wednesday for a new get-out-the-vote initiative.

Kid Rock will be seeking to register voters at his concerts.

He took to Facebook to post a lengthy commentary on what he is currently doing to enter the race.

When my name was thrown out there for US Senate I decided to launch kidrockforsenate.com. I was beyond overwhelmed with the response I received from community leaders, D.C. pundits, and blue-collar folks that are just simply tired of the extreme left and right bullshit. As part of the excitement surrounding this possible campaign, I decided to take a hard look to see if there was real support for me as a candidate and my message or if it was just because it was a fresh new news story. The one thing I’ve seen over and over is that although people are unhappy with the government, too few are even registered to vote or do anything about it. We have over a year left until an actual election, so my first order of business is to get people engaged and registered to vote while continuing to put out my ideas on ways to help working class people in Michigan and America all while still calling out these jackass lawyers who call themselves politicians.

During this time while exploring my candidacy for US Senate, I am creating a 501(c)(4) – a non-profit organization for the promotion of voter registration. Not only can I raise money for this critical cause, but I can help get people registered to vote at my shows. Since the announcement, the media has speculated this was a ploy to sell shirts or promote something. I can tell you, I have no problem selling Kid Rock shirts and yes, I absolutely will use this media circus to sell/promote whatever I damn well please (many other politicians are doing the same thing, they just feed you a bunch of bullshit about it). But either way, money raised at this time through the sale of merchandise associated with this very possible campaign will go towards our ‘register to vote’ efforts.

One thing is for sure though…The democrats are ‘shattin’ in their pantaloons’ right now…and rightfully so!

We will be scheduling a press conference in the next 6 weeks or so to address this issue amongst others, and if I decide to throw my hat in the ring for US Senate, believe me… it’s game on mthrfkers. — Kid Rock

Kid Rock told the Guardian in 2015, “I am definitely a Republican on fiscal issues and the military, but I lean to the middle on social issues.”

And, in case you didn’t know it, this guy is an ordained minister.

“I am no fan of abortion, but it’s not up to a man to tell a woman what to do,” he said. “As an ordained minister I don’t look forward to marrying gay people, but I’m not opposed to it.”

One should not be surprised at any of his statements. Ritchie fails to see the economic, moral and societal impact of both abortion and redefining marriage to include sodomites. Those things are not just “social issues.” They are culture issues.

One thing to keep in mind,

It looks like we are going to have those that not only write the songs, but the laws as well.