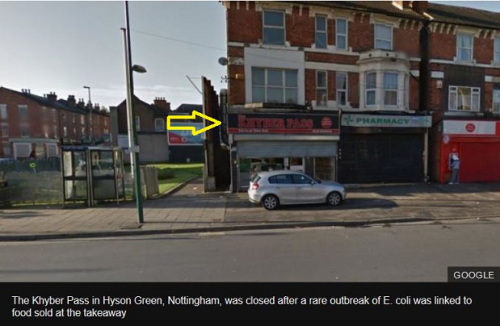 Last November, I first posted about the disgusting toilet habit of Muslims in “Muslim washes his anus at public drinking fountain in Italy”.

But it’s one thing for Muslims to use their (left) hands, instead of toilet paper, to “clean” their butts after defecating. It’s another thing entirely when Muslim restaurant employees do that and then contaminate food and drinks that they serve to the public, which I chronicled in two subsequent posts:

Here’s more evidence that this disgusting Muslim practice is a public health hazard.

The BBC reports that in June 2014, a rare strain of E. coli – only the second outbreak of its kind in Europe – was found at The Khyber Pass, a kebab take-out restaurant in Nottingham, England. More than 140 customers fell ill from Khyber Pass’s food that was contaminated with human feces.

An investigation by Nottingham City Council led to the discovery that the food poisoning organism responsible was Enteroinvasive E. coli (EIEC). EIEC is only found in the human gut and so inspectors concluded people affected by the outbreak must have eaten food contaminated with human feces. The outbreak was traced to the kebab shop after analysis of fecal specimens from patients showed that the same strain of EIEC was found in lettuce prepared by food workers at Khyber Pass.

“This was a significant and serious food poisoning outbreak affecting a large number of people, some of whom developed severe symptoms. It’s fortunate there were no fatalities, as this is a strain of E. coli rarely found in the developed world, this being only the second confirmed outbreak in Europe. It’s clear that hand-washing practices by some workers were wholly inadequate and this led to food becoming contaminated.”

See also “Muslims in Scotland university defecate in showers instead of toilets” .