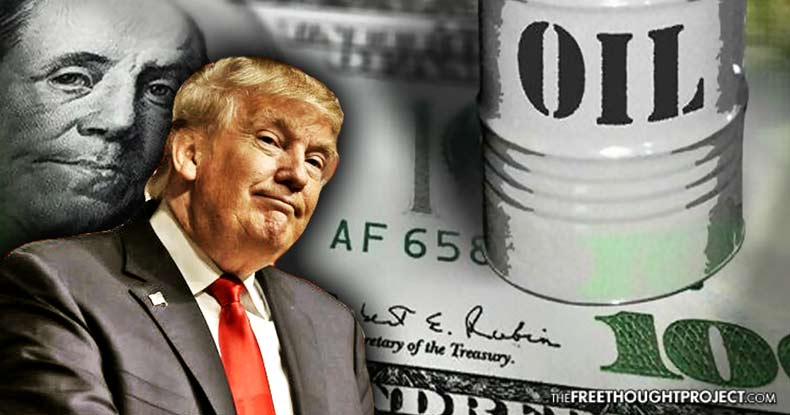 Washington, D.C. – The United States is on the precipice of pushing the Sino-Russo alliance closer than ever with the Senate’s almost unanimous approval of the Countering America’s Adversaries Through Sanctions Act. If President Trump signs the dangerous bill, it will essentially guarantee the fall of the U.S. petrodollar as the global reserve currency.

Hailed by the usual warmongers in the Senate, including resident cold warrior John McCain, the new legislation calls for a ratcheting up of tensions with Moscow under the guise of alleged election interference.

Although there has never been any evidence provided to the public in regards to election meddling, the U.S. lamestream propagandist media, in concert with the deep state, have run a consistent campaign meant to demonize and connect Trump/Russia.

The reality is that Trump ran on a platform of détente with the Russian, converse to Hillary Clinton’s “get tough with Russia” rhetoric during the 2016 presidential campaign, thus trying to create back channels (a common move in diplomacy), to negotiate with Russia outside of the purview of the always listening U.S. spying apparatus.

The new sanctions are meant to directly target the main strength of the Russian economy, the energy sector, in an effort to compel U.S. client states in Europe to abandon mutually beneficial long-term energy deals with Russia.

This dynamic will unquestionably bring Russia and Beijing closer together, as the Russians will hedge against the loss of energy deals with American vassals in Europe by solidifying long-term energy, economic and security cooperation with the Chinese.

Essentially, if Trump signs the bill, the writing is on the wall: Russia and China must form a strategic alliance to withstand the methodical movements of the U.S. empire meant to destabilize their respective governments – with a strategic goal of preventing Eurasian integration.

As the global winds of change blow, look for Germany and Turkey to play a key role in deciding whether Eurasian integration is stifled by the United States. As Max Keiser so presciently notes, “The so-called Washington consensus is disintegrating.”

“The post-WWII order of the US dollar hegemony run out of Washington DC, the so-called Washington consensus – is disintegrating, it is falling apart. The US doesn’t seem to want to take on reality – they want to live in the past, and they want to believe they are the policeman of the world, and they are going to impose sanctions,” Kaiser said.

“Germany is not going to go along with American sanctions quite obviously. They are just pushing Germany into the arms of Russia. Then you’ve got an enormous axis of power to Germany, Russia, and China, and they are going to get out of the US dollar. So then gasoline in America suddenly goes to $10, 11, 12 a gallon. How is that going to help the American economy if the US dollar loses its position as a reserve currency?” Kaiser continued.

Another important factor to consider when analyzing these latest moves by the United States is that China has no obligation to honor the U.S. sanctions, and in fact, is more likely to increase cooperation with the Russians as a result – especially in terms of the energy sector.

According to a report by the Global Times:

“The bill passed by the US House of Representatives, which targets Russian energy companies, banks, and individuals, is likely to reduce Russia’s share in the global energy market, especially in the US and EU. Beijing has no obligation to support US sanctions on Russia. Actually, China is likely to continue to tap the potential of cooperation with Russia in the area of energy…

“The energy sector is a strategic pillar of the Russian economy, which may take a new blow from the US sanctions. However, an economic breakdown in close proximity is not in line with the interests of China. If there is economic chaos in Russia, China may need to consider a financial bailout for Russia to help the country address its problems caused by the US sanctions. Economic chaos caused by the US sanctions is only a “worst-case scenario” with a very low probability. The political and economic realities of a multi-polar world have reduced US power over international affairs. The most likely outcome is that Russia will remain a superpower whose overall influence may wane but is never genuinely challenged.”

And perhaps most telling of all is the fact that attempting to cut Russia’s energy sector off from the allied west will likely only “expand the currency swap between the ruble and the yuan.”

The recent formation of a BRICS gold marketplace, which could be used to bypass the U.S. Petrodollar in bilateral trade, continues to take shape as Russia’s largest bank, state-owned Sberbank, announced in mid-July that its Swiss subsidiary had begun trading in gold on the Shanghai Gold Exchange.

Russian officials have repeatedly signaled that they plan to conduct transactions with China using gold as a means of marginalizing the power of the dollar in bilateral trade between the geopolitically powerful nations. This latest movement is quite simply the manifestation of a larger geopolitical game afoot between great powers – with the currently pending sanctions almost certain to increase the pace of this transition away from the U.S. petrodollar.

Furthermore, if Trump doesn’t veto the legislation, you can be assured that any possibility of rapprochement with Russia is history. On top of that, Russian president Vladimir Putin said Sunday 755 U.S. diplomats will be expelled from Russia by Sept. 1.

The Russian publication Kommersant is also reporting that if the sanctions are approved by Trump, retaliation will include:

Essentially, the U.S. is forcing the Russians and Chinese into a closer strategic alliance, and the latter’s only means of hedging against increasingly reckless U.S. actions, meant to undermine Eurasian integration and destabilize Russia in hopes of eventual regime change, is to vastly increase the economic, energy and security cooperation between their two states.

Likely seeing the writing on the wall, it can virtually assure that countries such as Germany and Turkey, two key hubs of Eurasian integration, will eventually turn towards the multipolar future of an integrated Europe and Asia – and away from the hegemonic dictates of the American Empire in the name of self-interest.

Please share this important article to help others understand the critical nature of the dangerous game being played by the ruling-elite oligarchy!