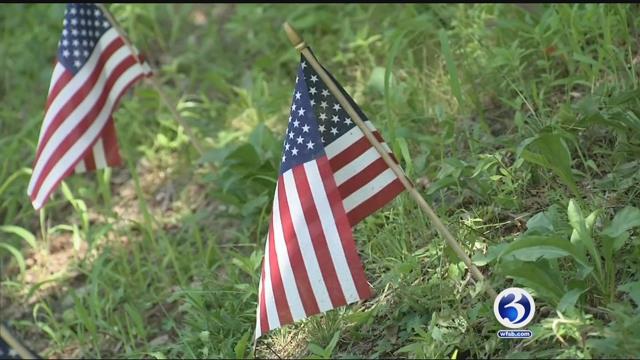 Connecticut, which used to be filled with patriots that founded America, is now largely overrun with nothing but Communists and Communist sympathizers, which is why their economy is in the tank, rights are being violated and people are leaving the state. Now, homeowners are being targeted with hate mail simply because they fly an American flag at their house.

Some residents in Marlborough are the targets of hate mail due to flying American flags outside their homes.

Those who received the hate mail in their mailbox said that it would not deter what they believe, how they feel or their patriotism.

“There are 12 flags on the bottom,” said Ashley Meyer about her flag display. “Two up top. One in honor of my grandfather. The other in honor of our other friends who have served our country.”

Meyer said that she received an envelope in her mailbox with anti-American and anti-government fliers.

“Someone took all this time to send all this through the mail,” Meyer said. “Clearly, they have no patriotism and aren’t proud of our country.”

“I’m a very proud American,” said Ken Hjulstrom, who also received the same papers. “My son is a veteran with Army National Guard, spent time in Iraq. My father was a World War II veteran.”

“This I think is really over the top in terms on content,” Hjulstrom said, believing that the information on the papers was both racist and anti-Semitic.

Instead of retreating from the scare tactics of those who sent them the multiple pages of documents, both Meyer and Hjulstrom said they would not remove their flags and would encourage others to put them up as well.

“I hope everybody in Connecticut puts flags up everywhere just to show people like this who are so hateful that we need to ban together,” Meyer said.

Meyers and Hjulstrom were not the only residents to receive the envelope.

They say they hope that police will be able to track down those who sent the documents.

I’ll say this, patriotism is not merely flying a flag at your house, though it may contain that. It is more about holding fast to the law and justice and preserving a land in which your children grow up in freedom and God’s blessing. If you depart from that, no matter how many flags you place in your yard, you have abandoned patriotism for a symbol of slavery.

The residents of Marlborough should not be intimidated by anyone, let alone those sending anonymous mail to them.