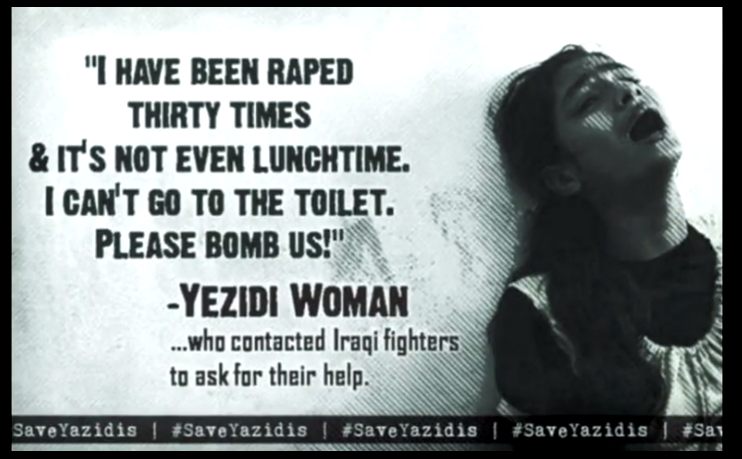 All in accordance with Islam’s most sacred texts and teachings.

It’s not just the “Islamic State.” Sex slave auctions are rife throughout the Muslim world. Sex slaves are sanctioned, even encouraged under Islam.

The Islamic State invokes the Quran chapter and verse. Sex slaves are war booty. Following a victory, Muhammad would usually distribute the captives, both male and female, as slaves to his soldiers. And Muhammad is the “perfect example for Muslims.” According to Islamic law, Muslim men can take “captives of the right hand” (Qur’an 4:3, 4:24, 33:50). The Qur’an says: “O Prophet! Lo! We have made lawful unto thee thy wives unto whom thou hast paid their dowries, and those whom thy right hand possesseth of those whom Allah hath given thee as spoils of war” (33:50). 4:3 and 4:24 extend this privilege to Muslim men in general. The Qur’an says that a man may have sex with his wives and with these slave girls: “The believers must (eventually) win through, those who humble themselves in their prayers; who avoid vain talk; who are active in deeds of charity; who abstain from sex, except with those joined to them in the marriage bond, or (the captives) whom their right hands possess, for (in their case) they are free from blame.” (Qur’an 23:1-6)

Prosperous are the believers who in their prayers are humble and from idle talk turn away and at almsgiving are active and guard their private parts save from their wives and what their right hands own then being not blameworthy.” (Quran 23:1-6)

Those whom their “right hands own” (Quran 4:3, 4:24, 33:50) are slaves, and inextricable from the concept of Islamic slavery as a whole is the concept of sex slavery, which is rooted in Islam’s devaluation of the lives of non-Muslims. The Quran stipulates that a man may take four wives as well as hold slave girls as sex slaves. These women are captured in wartime and are considered the spoils of war. Islam avoids the appearance of impropriety, declaring that the taking of these sex slaves does not constitute adultery if the women are already married, for their marriages are ended at the moment of their capture. A manual of Islamic law directs: “When a child or a woman is taken captive, they become slaves by the fact of capture, and the woman”s previous marriage is immediately annulled” (Reliance of the Traveller, o9.13).

Selling women — where are the feminist protestors?

I kept the four girls in an abandoned house. Each night I would have sex with a different one,” the dishevelled-looking man told the judge matter of factly. “Sometimes they seemed scared, but they never said no. They were all virgins when I got them and more beautiful than you can imagine.”

The suspected Islamic State of Iraq and the Levant (Isil) fighter standing before the Nineveh investigations court, 20 miles southeast of Mosul, seemed unrepentant as he confessed to his crimes; four counts of kidnap and rape of women belonging to the minority Yazidi sect and 10 counts of the murder of its men.

The evidence against Mohammed Ahmed filled several folders, which were stacked on top of a pile of a dozen or so others on Judge Arif’s desk.

Mr Arif continued to question 40-year-old Ahmed, who was struggling for breath and shaking. His eyes rolled and his chin lolled down to his chest. He had…