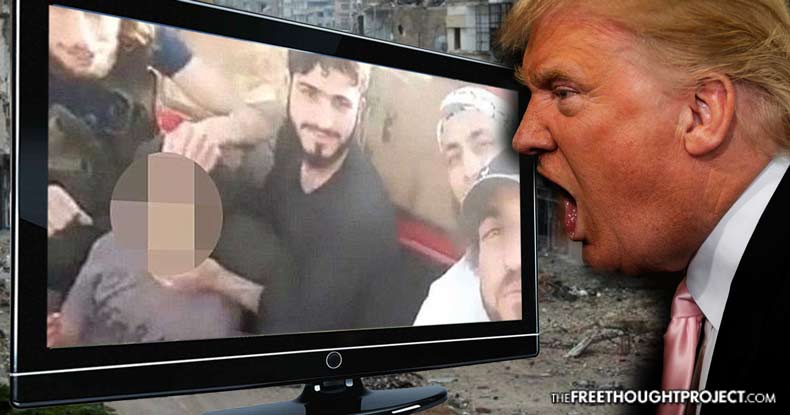 Washington, D.C. – New revelations have come to light that explain President Trump’s recent decision to end the CIA’s covert weapons in Syria. While regime change hawks were thrown into a frenzy over the recent decision, the real story is what specifically impacted the president’s thinking and caused him to end the program that supplied weapons to the so-called moderate rebels — many of which are actually known terrorist groups.

In the August edition of The Weekly Standard, Thomas Joscely, Middle East expert for the Foundation of Defense of Democracies, detailed the specifics surrounding Trump’s change of heart regarding the covert CIA weapons program:

“Earlier this year, President Donald Trump was shown a disturbing video of Syrian rebels beheading a child near the city of Aleppo. It had caused a minor stir in the press as the fighters belonged to the Nour al-Din al-Zenki Movement, a group that had been supported by the CIA as part of its rebel aid program…”

“The footage is haunting. Five bearded men smirk as they surround a boy in the back of a pickup truck. One of them holds the boy’s head with a tight grip on his hair while another mockingly slaps his face. Then, one of them uses a knife to saw the child’s head off and holds it up in the air like a trophy. It is a scene reminiscent of the Islamic State’s snuff videos, except this wasn’t the work of Abu Bakr al-Baghdadi’s men. The murderers were supposed to be the good guys: our allies.”

Trump is said to have pressed his senior intelligence official to explain how the CIA could be colluding with groups that behead children and upload the video to the internet as recruitment propaganda. It’s reported that none of the responses he received were deemed adequate.

“Trump wanted to know why the United States had backed Zenki if its members are extremists. The issue was discussed at length with senior intelligence officials, and no good answers were forthcoming, according to people familiar with the conversations. After learning more worrisome details about the CIA’s ghost war in Syria—including that U.S.-backed rebels had often fought alongside extremists, among them al Qaeda’s arm in the country—the president decided to end the program altogether.”

While Trump’s decision to stop using taxpayer dollars to covertly funnel weapons to terrorist groups that record themselves beheading children should be praised by the media, it is instead lambasted as — wait for it — a pro-Russian move.

It is no secret that much of the opposition forces in Syria are aligned with ISIS or al-Qaeda. In fact, the move by Trump was actually proposed in legislation by Congresswoman Tulsi Gabbard in the House and Senator Rand Paul in the Senate.

“For years, our government has been providing both direct and indirect support to these armed militant groups, who are working directly with or under the command of terrorist groups like Al-Qaeda and ISIS, all in their effort and fight to overthrow the Syrian government,” Gabbard said earlier this year.

The child beheading video, by so-called moderate rebels, was only lightly covered in the mainstream press and quickly faded from the headlines without ever being fully investigated or explained to the public. TFTP covered the video upon its release and specifically noted that the gruesome and shocking murder was filmed and carried out by members of Nour al-Din al-Zinki — a group of ‘moderate rebels’ aided, funded, and armed by the United States.

As we previously reported, the Nour al-Din al-Zinki movement began in 2011 during the Syrian civil war and grew to be a powerful anti-Assad group with the help of the US. The group also reportedly fought against the Islamic State. However, as the video shows, their crimes against humanity are no different than any other terrorist group.

Amnesty International released a report detailing the horrid abuses of the Nour al-Din al-Zinki Movement. The group, who’s received everything from anti-tank missiles to cash from the US, stands accused of unspeakable human rights abuses, including abductions and torture — and now, publicly removing the heads of children.

The beheading video clearly illustrates the sick reality created by US foreign policy. The brutal video showed five men posing with the frightened child in the back of a truck. Later, one of the men is seen cutting off the boy’s head.

The incident is reported to have taken place in Handarat, north of Aleppo, where heavy violence has been prominent recently. The men in the video say the child is a fighter from Liwa al-Quds (the Jerusalem Brigade), a Palestinian pro-government militia operating in the Aleppo area.

Liwa al-Quds is a pro-Syrian government Palestinian paramilitary faction made up of the Palestinians who have been driven out of their homes in the Handarat Camp. They are not part of ISIS and only fight to regain their homes.

However, according to the Liwa al-Quds, they said the boy, identified as Abdullah Issa, was just an innocent 12-year-old from a poor refugee family who lived in a rebel-held area of Aleppo.

Interestingly, the U.S. State Department seemed content to allow Harakat Nour al-Din al-Zenki, the group responsible, to claim that it was rogue elements of the organization that carried out the beheading and that they had arrested the men that committed the gruesome crime.

“If we can prove indeed what happened and this group [al-Zinki] was involved in it, it would give us pause about any assistance or frankly any further involvement”, U.S. official Mark Toner told reporters at a press conference.

“I can’t take what these consequences would be, but this certainly would give a pause and we’ll look at any affiliation or cooperation with this group,” he reiterated.

This was a weak non-response, to a crime of extreme brutality upon a child, if ever one was seen.

Revealing the extreme western collusion with Islamist elements in the Syrian regime change operation, one of the major broadcasters in the U.K. – Channel 4 – went so far as to attempt to obscure and hide previous online content, in which the beheaders were portrayed as heroic “moderates,” after the release of the child beheading video.

According to a report by Zero Hedge:

The only press agencies that publicly and consistently challenged the State Department at the time were RT News and the Associated Press, yet even these attempts didn’t get picked up beyond the confines of the State Department’s daily briefing. When the AP’s Matt Lee initially questioned spokesman Mark Toner as to whether Zenki would continue to receive any level of US assistance, Toner casually replied “it would give us pause” – which left Lee taken aback.

The criminality of the covert CIA weapons program (which Thomas Joscelyn emphasizes that Trump has now come to understand the full scope of CIA cooperation with al-Qaeda in Syria) leads to one distinct question: who in the Obama-era State Department and CIA must be prosecuted first?