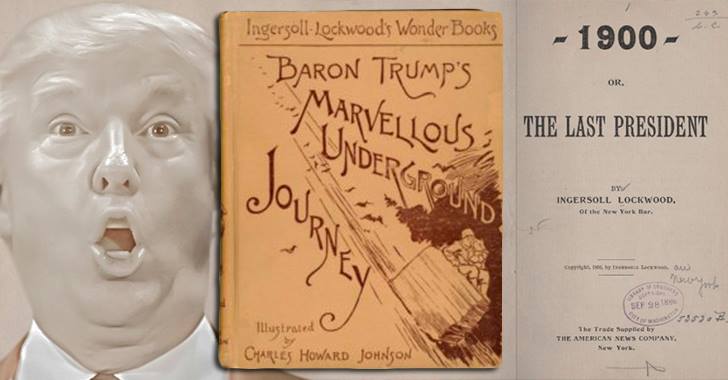 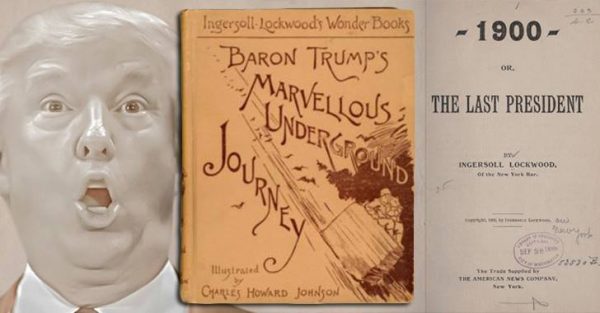 (ANTIMEDIA) — Did a 19th-century author really predict Trump’s election, Russiagate, and the potential collapse of the country? It’s impossible to say for sure, but the ever-resourceful and endlessly curious users of Reddit and 4chan have unearthed some fascinating evidence to give some substance to the fantasy.

In the late 1800s, an American lawyer, political writer, and novelist named Ingersoll Lockwood penned two fantasy novels about a highly-imaginative little boy named “Wilhelm Heinrich Sebastin von Troomp, commonly called, ‘Little Baron Trump,’ and his wonderful dog Bulger.” Little Baron Trump is the main character in both The Travels and Adventures of Little Baron Trump and His Wonderful Dog Bulgar and Baron Trump’s Marvelous Underground Journey, which follow the wealthy boy and his dog as they leave “Castle Trump” to embark on a journey underground to explore the theory that the earth is not solid, but inhabited by people who were chased underground by “terrible disturbances.”

The boy learned of this theory through a manuscript given to him by his father called World within a World, which was written by a celebrated thinker and philosopher named Don Fum. Before leaving Castle Trump in the Marvelous Underground Journey, Baron’s father refers to Don as a “safe and trusty counselor” and reminds him of the Trump motto – “the pathway to glory is strewn with pitfalls and dangers.” As Baron goes on a search for the portal to the “World within a World” with Don as his guide, his travels take him to the Ural mountains in Russia. So Little Baron Trump and his dog are guided by Don to Russia. While all of this is fascinating — and one heck of a coincidence — it’s Lockwood’s third book that really throws everyone for a loop.

“The Chicago Platform assumes, in fact, the form of a legendary propaganda. It embodies a menace of national disintegration and destruction.” That quote, taken from Garret A. Hobart’s public speech of acceptance of the Republican nomination on September 10th, 1896, also serves as the epigraph of a book also published in 1896 by Ingersoll Lockwood, titled 1900 or The Last President. It was stamped by the Library of Congress on September 28th, just two weeks after Hobart gave that speech.

The Last President opens in New York City on November 3rd, 1896, with the announcement of the newly-elected president of the United States, who happens to be an outsider candidate — the candidate who represented the “common man,” who would liberate the people from the grip of the bankers, and “undo the bad business of years of unholy union between barters and sellers of human toil and the law makers of the land.” Aka, an anti-establishment candidate.

The very first page describes New York in turmoil over the announcement, with mounted policemen yelling through the streets:

“Keep within your houses; close your doors and barricade them. The entire East Side is in an uproar. Mobs of vast size are organizing under the lead of Anarchists and Socialists, and threaten to plunder and despoil the houses of the rich who have wronged them for so many years.”

There are many theories floating around the internet; some say Barron Trump is actually Lockwood, who traveled through time to write about his adventures; others believe Steve Bannon is a 50-year old Barron Trump and they’re time-traveling together; another believes “we are all Barron and Barron is all of us,” and some of us are simply chalking it up to 2017 having a competition with itself to see just how weird it can get.