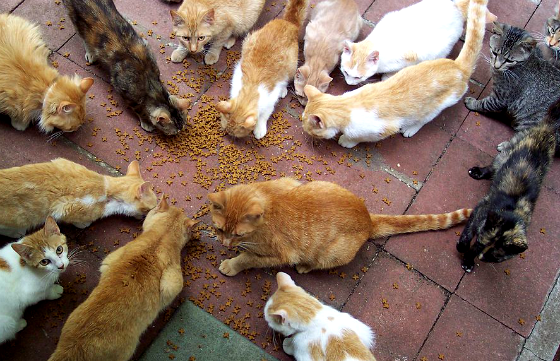 You are not free. In the one nation imperiously touting freedom as a star-spangled guiding principle, you are not free to enjoy a peaceful existence unmolested by armed revenue-reapers of the State — collecting rainwater, selling lemonade, living off-grid, charitably tending the homeless, and even feeding stray animals, all require you pay up, permit up, or license up — or be remanded to a cage for an intellectually insulting period of time.

Yes, apparently, leaving food and water for a small colony of feral cats gives the State sufficient premise to rob a pair of animal good samaritans blind — because, nary an issue exists government couldn’t royally mangle — turning otherwise law-abiding people into paupers and criminals, and souring public trust and sentiment in the process.

Kansas couple, Sue and Ray Jones — recently found guilty of feeding and giving water to their Augusta neighborhood’s feral cat community, because the State says that is a thing about which to have guilt — had to file an appeal against the charges and $150 fine for each person, as well as for each finding of guilt.

Considering the pair were originally charged with 21 separate counts, feeding feral cats comprises quite an expensive endeavor in the small Midwestern city, indeed.

“I’ve heard from a lot of people all over the country that say … they’ve never heard of anything like this,” daughter Kate Roggenbaum railed to KWCH of the inane situation. “One comment was this must be fake news.”

Even a thorough perusal of the Jones’ predicament indeed reads like something from a dystopian novel — but this Nanny State authoritarianism wielded against a charitable action wasn’t a tale conjured from the imagination of a keen novelist — this may be 2017, but this real-life anti-kitty script seems ripped from a subtext of Orwell’s 1984.

With their guilty convictions, Sue and Ray face time behind bars if they decide to rebel and … feed stray cats again.

“If they for example went out and violated another ordinance, such as if they went out and the police found them feeding cats and they were charged with that, the court can find that as a violation of their probation and order them to jail,” the Jones’ attorney, John Johnson, averred KWCH following the trial in mid-July.

“I think it was pretty harsh,” he added, noting, “I think the judge was very considerate. I mean, he looked at the evidence and took a very well-reasoned approach to his ruling, and it is what it is.”

Where the couple’s attorney seemed flippantly dismissive, the public has compensated in outrage — some local businesses ostensively affected by the stray cats even find the judge’s ruling unjustifiable.

“It’s not a problem to us though other than them leaving their trash,”Amber Goff, manager of a Valero, whose dumpster serves as sheltered area for the Joneses to leave food and water for the cats. “I don’t think they should get in trouble for feeding a cat necessarily, but be responsible about it.”

Goff says the felines aren’t a nuisance, and has no issue with the couple’s actions, but would prefer the feeding dishes not be left unattended.

In fact, with the possible only exception of the manager of a nearby NAPA store — who complained to animal control multiple times and expressed frustration with skunks attracted to the cat food and causing a smell nuisance — many locals besides the Joneses have fed the stray cats for some time.

None of them received massive fines or guilty convictions.

Detractors might be inclined to argue feeding scavenging animals only encourages growth and stability in the population, rather than solving the feral issue — or, worse, severely agitating the problem by creating a colony dependent on human handouts.

However, Sue Jones says feeding wasn’t the only care provided — after catching the cats, she brought them outside the city for spaying or neutering, so their return to the local population would not mean an expanding feral colony. While this method might not solve the issue of unwanted animals roaming the streets, it’s certainly a step toward curbing the nation’s sizable feral cat population.

Indeed, this isn’t the first brush with the law for Sue Jones. Johnson, the attorney, told KWCH the city issued a citation to the cat-lover in 2015, for setting up boxes as shelters for strays outside her business. According to the outlet, Roggenbaum launched a crowdfunding page to assist her parents with fines and fees associated with the absurd convictions.

Daily life in the United States increasingly comes laden with untenable penalties — as if the government keeps constant vigilance to ensure that, when it comes forking over income and jumping through hoops to perform otherwise mundanities of everyday life, the citizenry isn’t somehow ‘doing it wrong.’

When the retort to outrage over convictions like that of Sue and Ray Jones comprises snide assertions they should have just followed the law, the laughable overabundance of laws governing every facet of existence in this nation is ignored — and for the worse, if these dangerous legal frivolities remain on the books should the wrong megalomaniac happen to steer this sinking ship.

In the meantime, providing food for needy, homeless animals — and, in sickening number of states, human beings — should apparently be considered verboten in these Overcriminalized States of America.