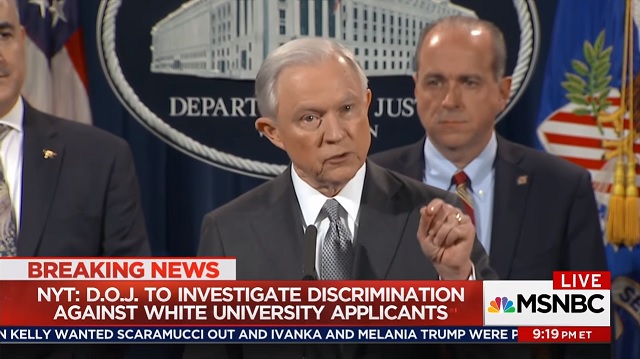 President Trump’s Department of Justice headed by Jeff Sessions is moving against the cultural Marxists who’ve hijacked our nation’s universities.

WASHINGTON — The Trump administration is preparing to redirect resources of the Justice Department’s civil rights division toward investigating and suing universities over affirmative action admissions policies deemed to discriminate against white applicants,according to a document obtained by The New York Times.

The document, an internal announcement to the civil rights division, seeks current lawyers interested in working for a new project on “investigations and possible litigation related to intentional race-based discrimination in college and university admissions.”

The announcement suggests that the project will be run out of the division’s front office, where the Trump administration’s political appointees work, rather than its Educational Opportunities Section, which is run by career civil servants and normally handles work involving schools and universities.

The document does not explicitly identify whom the Justice Department considers at risk of discrimination because of affirmative action admissions policies. But the phrasing it uses, “intentional race-based discrimination,” cuts to the heart of programs designed to bring more minority students to university campuses.

That means the laws are going to be applied fairly, rather than actively discriminate against whites.

Of course, this is causing the left to lose their minds.

The world is coming to an end

Every single day it's another deplorable action, thought, or idea out of this abomination of an administration. I'm exhausted.

I want lightning to strike everyone in this regime

Discrimination works both ways…at least someone recognizes that.

Someone also recognizes that one begat the other — but only after one benefitted from it for decades while the other had to fight it.

Attorney Lisa Bloom of Court TV, who is the daughter of celebrity attorney Gloria Allred, had a particularly interesting meltdown where she said she found it “hideous” that “our” tax dollars could go towards defending the rights of white people.

Remember that the majority of Trump voters think discrimination against white people is more prevalent than against black folks.

The thought of an even playing field terrifies leftists who are dependent on special privileges.