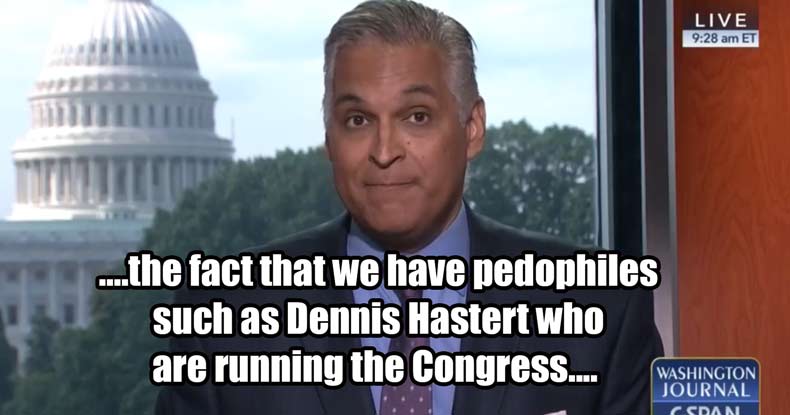 We now have solid proof the press will not do its job and acknowledge the presence of pedophiles in high positions of government. On a recent episode of C-SPAN’s Washington Journal, Washington Times reporter Stephan Dinan and host Pedro Echevarria were discussing President Trump’s Presidential Advisory Commission on Election Integrity. But when a caller brought up pedophilia and dropped a few names, Echevarria cut him off and refused to address the caller’s concerns.

A caller named “Jeremy” came on the air as a call-in from Kansas. Appearing knowledgeable about voter fraud at the ballot box, he stated a few general concerns he had over the issue. “There is voter-suppression going on…” he said adding a quick reference to #unrig, a movement to unmask how election riggers operate. He addressed the notion illegals voted in the presidential election by saying “it doesn’t make sense” that undocumented immigrants would risk deportation or going to jail for voting in a presidential election.

Jeremy moved on to what he claimed was a “bi-partisan” effort to “suppress evidence” of voting machine hacking. Indeed, as Politico reported, a Princeton group of professors and PhD students make it their mission to prove the vulnerabilities of voting machines and concluded, “the machines that Americans use at the polls are less secure than the iPhones they use to navigate their way there (to the polling station).”

But Jeremy then switched gears in his address to the two members of the media and raised serious questions about the motivations behind such hacking and why it appears to him the establishment candidates seem to always come out on top. He questioned:

Why we have a bi-partisan seditious consensus to cover this up is not clear. Whether it’s because of the fact that we have pedophiles such as Dennis Hastert (former Speaker of The House) who are running the Congress, or people connected like Jeffery Epstein the billionaire Mossad…

And with that comment, Echevarria told Jeremy “I’m going to have to end it there (inaudible but sounded like “Pauley”) is running out of time.” The host cut him off, refusing to hear any more about pedophilia, possibly mentioning his producer’s name in the confusion.

Dinan didn’t shy away from the caller’s concerns and addressed Jeremy’s contention the voting systems are rigged by saying there are many people studying the security of the technology at the ballot box. But neither Dinan or Echevarria would comment on the factual information that the former Speaker and an influential billionaire connected to dozens upon dozens of politicians and world leaders are both pedophiles.

The incident caught the attention of Editor and Publisher of Newsbud (Sibel Edmonds) who tweeted:

C-SPAN cuts off awesome caller who calls out PEDOPHILES IN CONGRESS – https://t.co/b5DQdypEma

Edmonds noticed, along with the editors of TFTP, the mainstream media wants nothing to do with any discussion of pedophilia or pedophile leaders in Washington, leading some to question if there is, in fact, a cover-up going on.

As TFTP has reported, it is the news story that has not only gone overlooked but purposely ignored as we witnessed Echevarria and Dinan do. While Jeremy’s comments were focused on election fraud and machine rigging, the subject of whether or not the election of 2016 was rigged in Trump’s favor is the dead horse the mainstream media likes to beat. But, to date, the media has not been presented with one instance of election meddling or rigging.

Yet Hastert and Epstein have both been convicted of crimes related to their activities as pedophiles, an indisputable fact. The notion that such rich and powerful men could be leading and influencing Washington and Congress was so quickly dismissed it could make one’s head spin.

We at The Free Thought Project continue to call on individuals with information about pedophile leaders in Washington to come forward and hold those men and women accountable for their criminal actions. Congressional leaders like Hastert should not be able to get away with victimizing the young, all the while enjoying their positions of authority, riches and lavish living.

Jeremy calls in at 26 minutes into the video below.