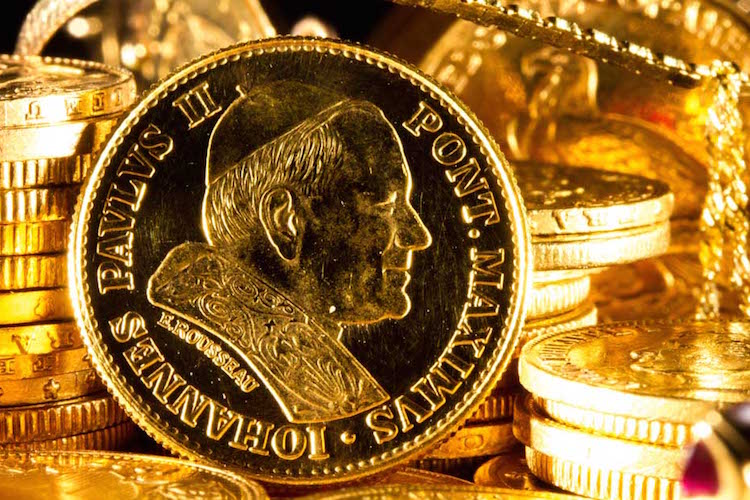 One of the world’s 7 remaining absolute monarchies, Vatican City in the heart of Rome, Italy, is a peculiar city within a city, and one of the wealthiest establishments on earth. If you’ve ever been to the Vatican, which is actually a sovereign nation, you’ve seen the unbelievable wealth owned by the Catholic Church, but how much is the Vatican really worth?

The Rothschild family is believed to hold some five times more than the combined wealth of the world’s 8 top private billionaires, but when it comes to the Vatican, it’s much more difficult to assess its overall wealth. In fact, it’s actually practically impossible to pin down the Vatican’s wealth, as the sum total depends greatly on how you add up their assets and affiliations with churches around the world, and also on who you ask.

For example, a 1987 investigation into the Vatican’s finances by Forbes magazine, claims that the Vatican was nearly broke, spending almost twice as much annually as it brought in.

“For all its splendor, the Vatican is nearly broke. Last year the Holy See, the administrative center of the Church and the spiritual capital of its members, took in $57.3 million from sources as diverse as fees for ceremonies; income from publications, newspaper ads, and the sale of videocassettes; and surprisingly modest investment earnings of $18 million. With investments of some $500 million, the Vatican commands fewer financial resources than many U.S. universities.” [Source]

This is hard to fathom when you consider the sheer material extravagance held within the property itself which features thousands of priceless works of art and gold.

The Vatican is composed of two major entities: Vatican City-State and the Holy See. As estimated by Forbes, Vatican wealth is nominal, merely in the hundreds of millions when factoring in the entity’s investments and various funds.

“The Vatican comprises two separate administrations, the City-State and the Holy See. The Vatican City-State, a 108.7-acre enclave within the city of Rome — the last remnant of the once powerful Papal States — is thriving financially. Its government provides municipal services for the world’s smallest sovereign nation. The City-State also maintains the Vatican Museum and runs a 200-man security force featuring a platoon of spear-carrying Swiss guards.” [Source]

The Holy See is, “an independent sovereign entity, holding the Vatican City enclave in Rome as sovereign territory, it maintains diplomatic relations with other states.” Employing several thousand laborers tasked with maintaining and securing the premises, as well as members of the clergy, the Holy See serves as the central point for the Catholic Church around the world. While labor costs are high, the Vatican maintains that its top members still work for ‘peanuts.’

“The Vatican’s top brass, however, still work for peanuts. Some cardinals make as little as $20,000 a year, and 30 Jesuits in top posts at Radio Vatican voluntarily accept the same salaries as janitors, about $11,000. Cardinals do get lavish perks, including sumptuous apartments at bargain rents.” [Source]

Fast forward to 2015, and a CNN Money analysis of the Vatican Bank suggests that the bank holds some $8 billion plus in assets, a number which includes the personal savings of many Vatican employees.

“Vatican Bank accounts are only supposed to be held by residents of Vatican City and church personnel. But according to Gerald Posner, a Vatican bank scholar and the author of “God’s Bankers,” these accounts were often awarded to powerful Italian officials looking to stash money without paying taxes.” [Source]

Looking at Vatican wealth on paper is also quite misleading. Time Magazine ran this assessment of Vatican wealth in 1965, offering an estimate of total wealth, which at that time reached into the tens of billions of dollars.

“Bankers’ best guesses about the Vatican’s wealth put it at $10 billion to $15 billion. Of this wealth, Italian stockholdings alone run to $1.6 billion, 15% of the value of listed shares on the Italian market. The Vatican has big investments in banking, insurance, chemicals, steel, construction, real estate. Dividends help pay for Vatican expenses and charities such as assisting 1,500,000 children and providing some measure of food and clothing to 7,000,000 needy Italians. Unlike ordinary stockholders, the Vatican pays no taxes on this income, which led the leftist Rome weekly L’Espresso last week to call it “the biggest tax evader in Italy.” [Source]

In other words, estimates are all over the place, and contemporary reporting on this subject is rather slim. Another dimension to this is the sheer value of all of the priceless works of art housed in Vatican City. Estimating the value of all of this in terms of dollars is impossible, but looking at just one well-known prize, the Sistine Chapel, offers a look at how difficult it is to appraise all of this. Estimates range from $400 billion all the way up to $2 trillion for just this one masterpiece.

Regarding real estate values of properties held by the Vatican, a 2004 estimate claimed the number was just under a billion dollars.

“According to the AP’s Nicole Winfield, the Holy See’s real estate was worth about $900 million in 2004 — before the real estate bust. That doesn’t include St. Peter’s Basilica and the Sistine Chapel, but even if both brought holy sites brought in another billion, that wouldn’t come close to covering it.” [Source]

In short, no one really knows how much wealth the Catholic Church controls, and the organization’s secrecy and obfuscation of the facts surrounding its wealth continues to lead investigators on a wild goose chase. The Vatican’s cashflow is in the hundreds of millions a year, individual holdings in the Vatican Bank total perhaps $15 billion, property held by the Vatican may be worth over a billion dollars, and the Church owns the largest store of the world’s most priceless art.

This article (How Much Wealth Does the Vatican Control?) was originally created and published by Waking Timesand is published here under a Creative Commons license with attribution to Isaac Davis and WakingTimes.com. It may be re-posted freely with proper attribution, author bio, and this copyright statement.