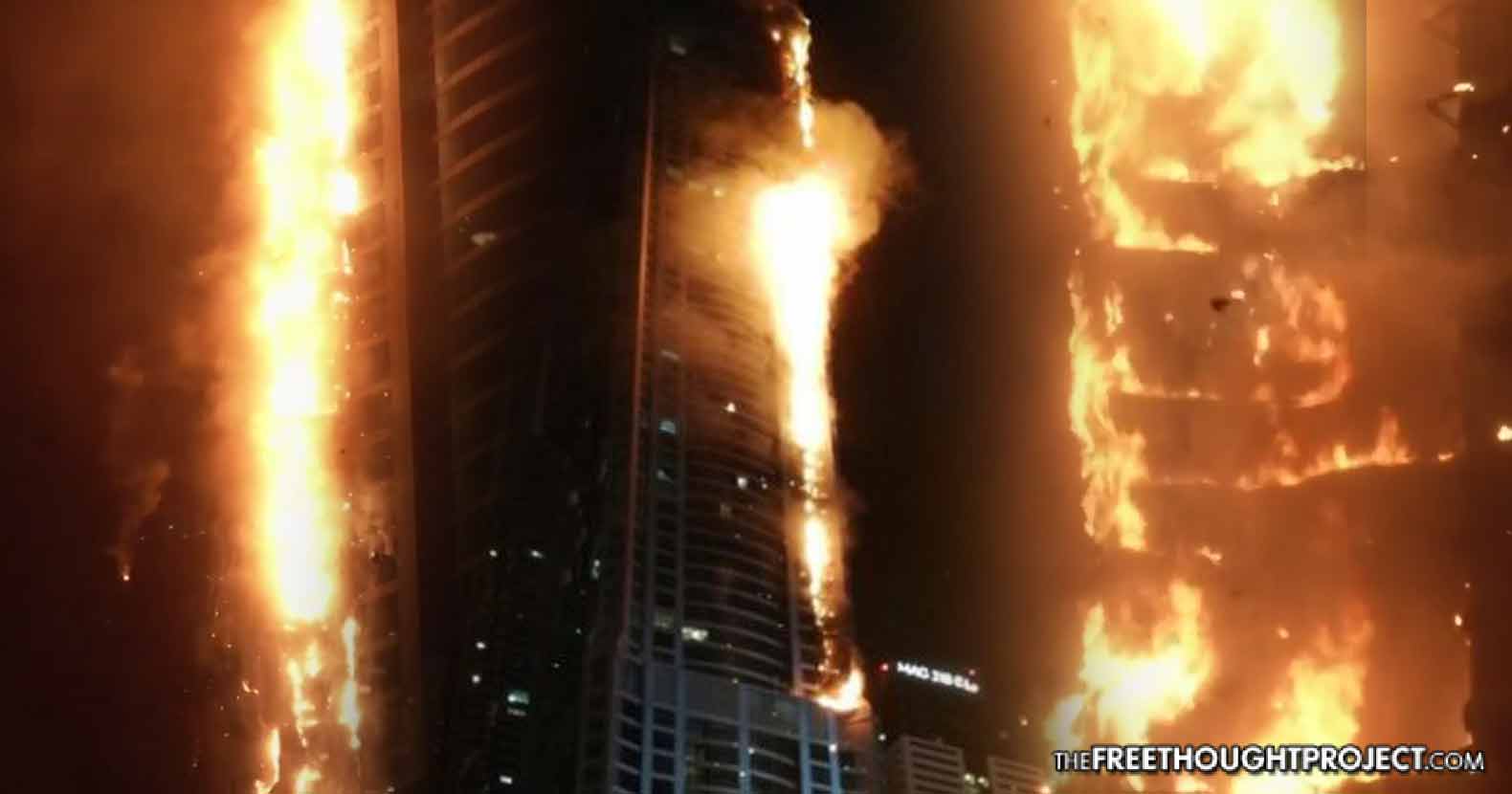 A high-rise fire in Dubai has left residents bewildered but unhurt. The fire broke out Tuesday night at the Torch Tower as it is known. Torch Tower is an 82-floor residential high rise located near Dubai Marina.

The blaze started on the 63rd floor at about 1am and burned for several hours before firefighters were able to get it under control. There were no reports of injuries as adequate fire alarms led residents to stairwells where they could quickly but safely evacuate the premises.

We received a report of a fire. We thank God that there were no casualties, that because of the efforts of all teams on the ground…the residents were evacuated from this building to another one and there were no injuries.

The #Torch tower in #Dubai, the fifth-largest residential building in the world, is engulfed in flames pic.twitter.com/PrztJZYZMH

It was the second time since 2015 the Torch Tower was found to be ablaze. The culprits in both fires appear to be cladding, which has been found to be flammable under certain conditions.

Eerily similar to the Torch Tower fire is the one which engulfed the UK’s Grenfell Tower fire.

The Grenfell Tower fire killed at least 80 people but the final death toll is expected to rise as the investigation into the deadly fire continues. All three fires were widespread and posed significant threats to life and property, but none of the three fires proved capable of collapsing the structures.

For comparison, the Grenfell Tower fire burned for 24 hours, charred nearly all 1,000 residences, but yet is still standing. Torch Tower has now been burned twice, and it, too, is still standing. Those three examples of high-rise fires serve as more evidence for the thousands of architects and engineers, and concerned citizens alike, who have shown repeatedly that towers do not fall at freefall speeds into their own footprints as a result of serious building fires.

Many highly-credible and reputable engineers have come to this conclusion over the years, including former NIST scientist, Peter Ketcham. Ketcham, who spent almost fifteen years working at NIST, described how the flawed investigation methods were significantly different from the normal standards used by NIST, in a letter to the editor of the respected Europhysics News magazine.

Ketcham’s letter was published in the November 2016 issue and comes just months after the magazine’s August 2016 report examining the Building 7 collapse in detail, which has been downloaded over 350,000 times according to the website.

Also, as TFTP reported last year, a groundbreaking forensic investigation into the collapse of the three World Trade Center towers on 9/11, published in Europhysics News – a highly respected European physics magazine – came forward with their claims that “the evidence points overwhelmingly to the conclusion that all three buildings were destroyed by controlled demolition.”

Architects and Engineers for 9/11 Truth is another such group of over 700 field professionals who claim Building 7 and the twin towers could not possibly have been felled by fire. The group concluded that not only was it not possible for the three buildings to have been destroyed by fire, the destruction of the two towers of the WTC and Building 7 appeared more like the result of controlled demolitions than fire damage. After debunking the official government narrative that the three structures were felled by airliners used as missiles, they concluded:

Every American must face his own
conscience squarely when confronted with the gruesome evidence of the destruction of these high-rises on 9/11 – especially considering the resulting death of over a million people in the wars that followed, and the loss of many of our precious freedoms through quickly passed
legislation.