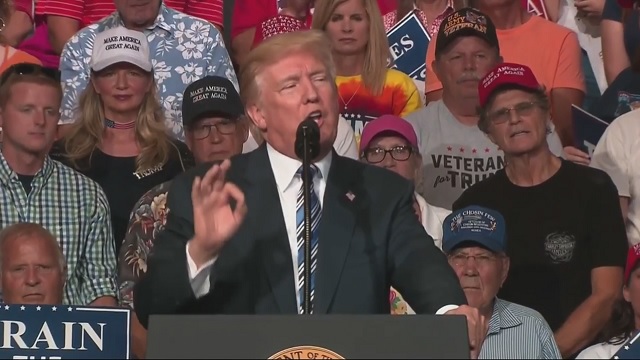 Donald Trump is refusing to sit by idly as the establishment openly foments a coup to oust him from the presidency.

“The reason why Democrats only talk about the totally made-up Russia story is because they have no message, no agenda and no vision,” Trump told a roaring crowd in West Virginia on Thursday. “The Russia story is a total fabrication. It’s just an excuse for the greatest loss in the history of American politics. It just makes them feel better when they have nothing else to talk about.”

“Most people know there were no Russians in our campaign,” Trump said. “There never were. We didn’t win because of Russia. We won because of you.”

“They can’t beat us at the voting booths so they’re trying to cheat you out of the future and the future that you want,” he said.

“They’re trying to cheat you out of the leadership you want with a fake story that is demeaning to all of us,” he said. “And most importantly, demeaning to our country.”

Watch the full rally below: