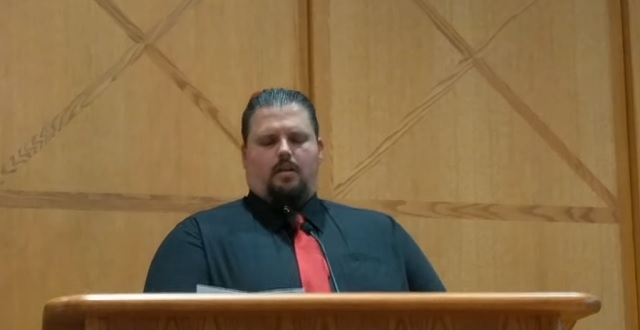 Don’t let anyone tell you our society is in decline.

In a move that both attracted and scared away attendees from a Colorado council meeting, a Satanist delivered the invocation Wednesday. Those opposed gathered outside while Andrew Vodopich became the first Satanist in the state to deliver the prayer.

Representing the Western Colorado Atheists and Freethinkers, Vodopich delivered the invocation at the Grand Junction City Council meeting. The one minute prayer would have failed to raise an eyebrow had it not been for a “Hail Satan” tacked to the end.

Video from the meeting shows council members standing as he delivers his words. At the end, an attendee can be heard saying “Yeah, what he said.”

…Vodopich was the first Satanist to deliver the invocation in Colorado. Several states have allowed non-Christian groups to partake in the tradition, citing the right to free speech in their defence.

Indeed, this is precisely what the founders intended. Thanks, ACLU.