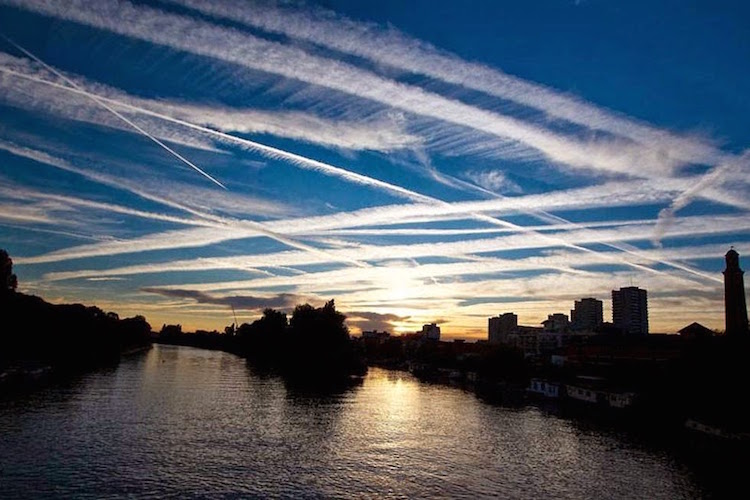 Over the past few years, the issue of geoengineering has been popularized. Mainstream media, academia, and government almost unanimously support the idea of geoengineering as a perceived solution to climate change while suppressing the evidence that it has actually been in use for some time without our consent. On the other hand, there is a growing number of people who are slowly beginning to understand the reality surrounding chemtrail geoengineering, and opposition is slowly growing.

In a bold move against the establishment, Kate Marvel, a mainstream scientist who specializes in “climate change,” spoke out at a Ted Talk against the onset of climate engineering with chemtrails, also known as Solar Radiation Management or “SRM.”

Firstly, computer theorist and founding partner of tech company Applied Invention, Danny Hillis, came on stage and proposed a number of geoengineering concepts which could theoretically, “turn down the temperature of the earth.” These included sending giant parasols into space, putting fizzy water into the ocean, and sending chalk into the atmosphere at a rate of 10 teragrams per year to reflect sunlight and in theory slow the effects of climate change.

Now enters Kate Marvel with the opening line, “Danny, you seem so nice, and I hope we can be friends, and you terrify me.”

“Geoengineering is like going to a doctor who says ‘You have a fever, I know exactly why you have a fever, and we’re not going to treat that. We’re going to give you ibuprofen, and also your nose is going to fall off.” – Kate Marvel

Marvel also noted that atmospheric spraying would not do anything to effect other environmental problems such as ocean acidification.

GeoEngineering refers to technologies which are used with the intention of interfering with the earth’s atmosphere in order to alter temperatures and climate. Most of these technologies are still in theoretical stages, however a growing body of evidence suggests that some weather modification technologies such as aerosol spraying or “cloud seeding” have been in production for many decades. Almost no studies have been done which assess the effect that cloud seeding has on environmental safety or human health, which shows that the government has been using untested technologies on the population without our consent.

In 2016, CIA Director John O. Brennan spoke at a Council on Foreign Relations conference about the benefits of geoengineering. However, any mention of potential negative impacts as a result of cloud seeding was conveniently left out.

“Another example is the array of technologies, often referred to collectively as GeoEngineering, that could potentially help reverse the warming effects of global climate change. One that has gained my personal attention is Stratospheric Aerosol Injection, or “SAI;” a method of seeding the stratosphere with particles that can help reflect the sun’s heat.” – John O. Brennan

Although we are all hearing from establishment figures like Brennan that climate engineering is a new technology which we all have the option to accept or decline before it is implemented, that is simply not the case. Evidence going as far back as the early 1920’s shows a push to develop the technology needed to control the weather and has been implemented in some form since at least the 1970’s. This information has been uncovered in various forms, one of those being patents which range from April 27th of 1920 to May of 2003 showing interest in the development of various forms of weather modification technologies. Documents have also been uncovered which show government involvement in SRM since 1947.

“The Federal Government has been involved for over 30 years in a number of aspects of weather modification, through activities of both the Congress and the executive branch. Since 1947, weather modification bills pertaining to research support, operations, policy studies, regulations, liabilities, activity reporting, establishment of panels and committees, and international concerns have been introduced in the Congress. There have been hearings on many of these proposed measures, and oversight hearings have also been conducted on pertinent ongoing programs.”

The geoengineering debate can be summed up in three words: “Problem, Reaction, Solution.” First, the dire problem of Climate Change is presented by figures like Al Gore, then a reaction is generated from the public in the form of “Climate Can’t Wait!” slogans and public unrest, then the solution of GeoEngineering is presented which gives more power to the powerful and hurts the people in the form of environmental degradation and potential health implications which the document from earlier lists as:

“1. Cloud seeding has been responsible for the great 5-year drought in the Northeast United States.
2. Isolated sections in the Northeast have experienced 18 years of drought due to cloud seeding.
3. Weather disturbances in the South Atlantic [sic] have been eliminated and has reduced [sic] the east coast’s rainfall by 30 percent – rain that is needed if agriculture is to be successful.
4. The average dairy farmer on the east coast, living in an area of cloud seeding, has averaged a net financial loss because of cloud seeding.
5. Crop production losses in Franklin County, Pa., alone have amounted to $50 Million.
6. When effects of seeding wear off, cloudbursts occur, causing floods, destroying crops, buildings, and drowning people as well as livestock.
7. Seeding has been responsible for the serious air pollution problems.
8. Mental retardation and insanity are traceable to cloud seeding chemicals.
9. Poisoning of all living matter is directly related to cloud seeding.
10. Emphysema is three times higher in areas of heavy cloud seeding.
11. Cancer is virulently out of proportion.
12. Financial losses to agriculture and related industries run into the billions.
13. Forest trees as well as cultivated orchards are dying from chemical reactions taking place in the air due to the addition of cloud seeding agents.”

We often hear predictions surrounding climate change by so-called “experts” like Al Gore who claimed that the Arctic would become “ice-free” by 2013. Ironically, in 2016 a global warming expedition to the Arctic was forced to turn around due to record ice.

There are real solutions to environmental problems which don’t end up harming us or the environment further. It is time for people to stand up for themselves and reject dangerous and untested technologies like these.

This article (Mainstream Scientist Exposes the Dangerous Reality of Chemtrails and Geoengineering) was originally created and published by Waking Times and is published here under a Creative Commons license with attribution to Phillip Schneider and WakingTimes.com. It may be re-posted freely with proper attribution, author bio, and this copyright statement.