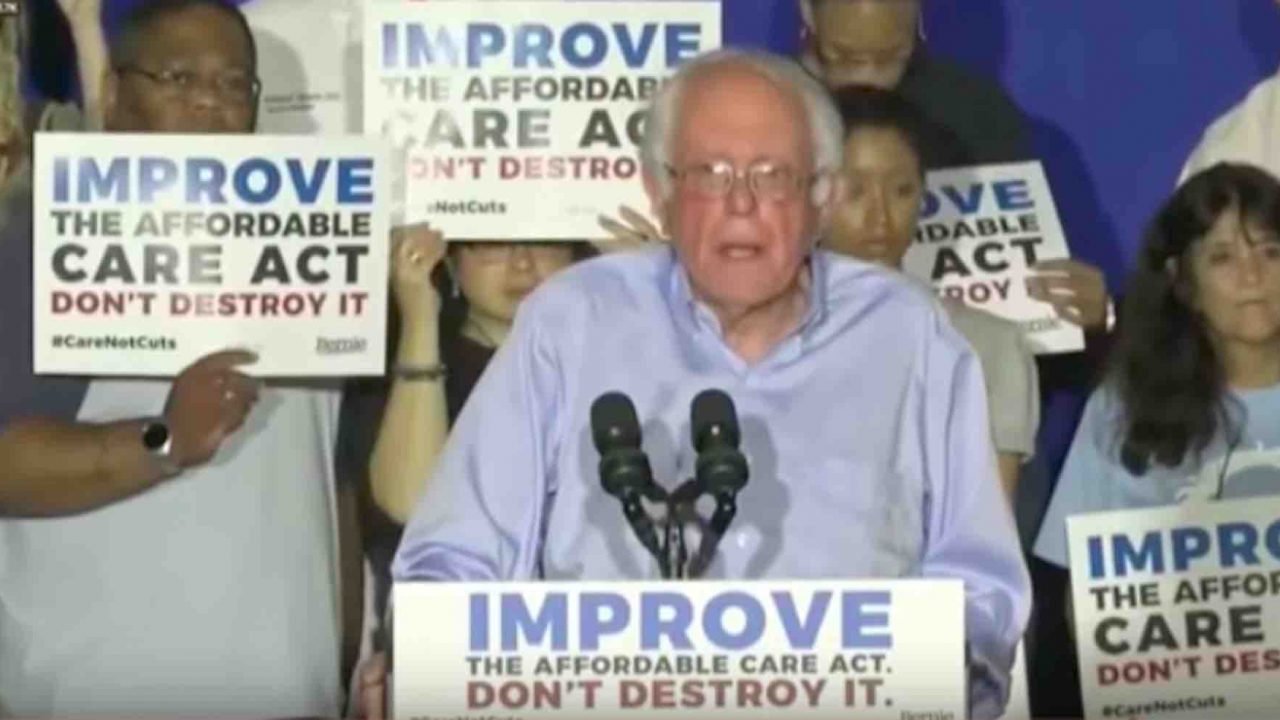 As the health care debate goes on, Senator Bernie Sanders will toss in a socialized medicine bill.

Bernie’s bill won’t be a realistic piece of legislation. The 1 percenter Socialist from Vermont has three successful bills to his name. Two of those involved renaming post offices. He was a marginal figure during the ObamaCare debate. The financials of the plan won’t work. But they never do.

ObamaCare insurers are losing billions. Aetna pulled out after $700 million in losses. United Health jumped after losing $720 million. The single-payer that Bernie wants to propose will be even worse.

Vermont’s single payer experiment cost $4.3 billion out of a $4.9 billion state budget. The California Senate passed single-payer with no way to cover the $400 billion cost in a $183 billion budget.

Democrats who wouldn’t vote for it faced death threats and accusations that they were “murderers”.

That’s what every argument about socialized medicine comes down to. Either you support it or you want people to die.

Bernie Sanders has been accusing Republican repealers of killing thousands. If ObamaCare is repealed, “36,000 will die yearly”. Then he claimed, “up to 28,000 Americans every single year could die.”

Is it 36,000 or 28,000? Who cares? The point is, if you’re against socialized medicine, you’re a murderer. The right numbers, either the budget or the casualties, don’t matter. Emotions trump statistics.

You would think that if the ObamaCare mandate is saving so many lives, we ought to be seeing fewer deaths, not more of them.

Life expectancy in the year after ObamaCare fell for the first time since 1993. That was, coincidentally, the year of Hillary’s big push for socialized medicine.

Socialized medicine is better at taking lives than at saving them. Just ask Bernie.

The closest the Vermont Socialist has gotten to medical management was his time as VA committee chair. After hundreds of thousands of veterans died waiting for care, Bernie covered up the carnage. He claimed it was a right-wing conspiracy, sabotaged efforts to hold hearings and dismissed the complaints.

“When you are dealing with 200,000 people, if you did better than any other health institution in the world, there would be thousands of people every single day who would say ‘I don’t like what I’m getting,'” he insisted.

The Socialist Senator was obsessed with the VA because it was another template for socialized medicine. He denounced the criticisms of it as a right-wing plot to privatize the VA. Advocates of socialized medicine respond in this typical tribal fashion to rationing scandals whether it’s the NHS or the VA.

Socialized medicine isn’t a system. It’s an ideology. No amount of deaths or statistics can discredit it. And that is another reason it’s so dangerous. It combines the entrenched bureaucracy that rots all government programs from within with the fanatical conviction that it is the road to utopia.

It doesn’t matter how many people a progressive program kills. It must be defended on principle.

Socialized medicine is sold with a lie. The lie is that you can get all the medical care you need for a low price. Or even for free. But socialized medicine doesn’t have less rationing than the hybrid government-market programs that progressives keep incrementally creating and then tearing down. It has more.

Insurers that offered the most options suffered the biggest losses under ObamaCare. The ObamaCare insurers that made money did it by offering few doctors and low quality health care. The more they rationed services to patients and payments to doctors and hospitals, the better they did. And that’s how ObamaCare was designed to work. Full socialized medicine is even worse.

Socialism always sells the same lie. Take anything, remove the profit motive, scale up taxes and you can distribute it more fairly. But instead socialized medicine cannibalizes the health care market. Patients get tightly rationed health care. Doctors and hospitals are squeezed on reimbursements. The system never rations itself. Instead it rations care and becomes a policy vehicle for social engineering.

Even while Obama Inc. was touting ObamaCare, it was moving forward with cuts to health care services for active military personnel. ObamaCare replaced viable health care plans with unusable plans that were catastrophic care in all but name. Rationing was always the name of the game.

Socialism doesn’t build services, it builds bureaucracy. The bureaucracy rations the services it administers while building bigger buildings, hiring more personnel and expanding its organization. Bureaucrats get nicer chairs while patients bleed out waiting to see a doctor. Medications vanish from the formulary while unions negotiate bigger contacts with more perks. The bureaucracy insulates itself from criticism by identifying its existence and funding with medicine. Oppose it and you’re a murderer.

The world was riveted by the drama of Charlie Gard’s death at the hands of British socialized medicine. The director of one hospital was being paid $78,000 a month. Another exec was receiving $55,000. Great Ormond Street Hospital, the institution made famous by Peter Pan, which seemed obsessed with killing Charlie, had a dying child abused by Jimmy Savile, in the Baby P case, Sabah Al-Zayyat missed the fact that an abused child had a broken back and its head of cardiology was booted for molesting young boys. A report had claimed that the hospital couldn’t pay its bills and children were beating treated in hallways and waiting rooms.

Take the worst abuses in a free market system. Then make them permanent. That’s socialized medicine.

And the NHS, the gold standard in socialized medicine, has death rates 4 times higher than America. Seriously ill NHS patients were seven times more likely to die than they were in the United States.

Almost 10% of British patients died in a surgical study compared to 2.5% of American patients. The head of anesthesia at Great Ormond blamed the NHS’ waiting lists for the death toll.

Call it single-payer, Medicare-for-all or any other euphemism, socialized medicine is death.

Members of Congress get their medical care through the Office of the Attending Physician: an institution that dates back to 1928. For a $596 annual fee, you can get your primary care that way. That’s where Bernie Sanders’ medical note came from indicating he uses it for his medical needs.

Congressman Steven LaTourette came down with pancreatic cancer after OAP doctors failed to notify him that he had a lesion. He died last year. Socialized medicine really will kill you.