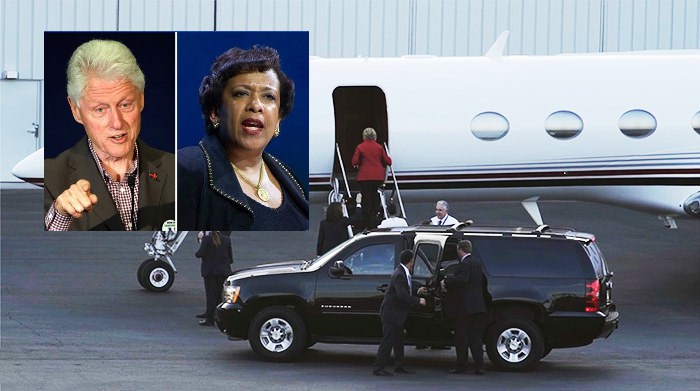 Late last week some information came out concerning the infamous secret meeting between former President Bill Clinton and former Attorney General Loretta Lynch in 2016 just ahead of the presidential elections.

Fox News reported that newly released documents indicated that ABC News inquired about the meeting and that the Lynch Justice Department press officer to contact two associates about the inquiry, apparently alarmed that there was an inquiry into the matter.

The response came just one minute later, “We need to talk.”

While Lynch came out and said that the two only discussed “golf and grandkids,” the entire talking points put out by the DOJ remained redacted in released documents.

So, how is talking about golf and grandchildren a matter of national security to the point where the talking points of the AG’s office need to be redacted from the public.

It’s obvious, isn’t it? They talked about more than that.

The Justice Department heavily redacted the documents under Exemption b (5), which allows agencies to withhold draft or deliberative process material. The blacked-out material centers around talking points drafted and used by Justice to respond to press inquiries about the Lynch-Clinton meeting.

Remember, Hillary Clinton was under investigation at the time for her illegal email server, which was used to send and receive classified information in violation of federal law.

Her criminal activities regarding that email server not only put sensitive information in the hands of her maid, but also resulted in the death of at least one American.

For those hoping the Trump administration would deal better than the Obama administration concerning Freedom of Information Act requests pertaining to corruption in government, the news is not encouraging.

Judicial Watch reported, “One email exchange shows that Former Assistant Attorney General Peter Kadzik was brought in to assist with public relations issues on June 28, 2016, the day after the tarmac meeting. (Kadzik is a longtime friend of John Podesta and a Hillary Clinton donor, who was criticized as being conflicted when he was assigned as the Justice Department attorney to oversee the probe of Hillary Clinton’s and her aide Huma Abedin’s emails found on Anthony Wiener’s computer.)”

“Melanie Newman, director of the Justice Department Public Affairs Office, sent an email to Richard P. Quinn, former national security assistant special agent, and Michael P. Kortan, who is currently the assistant director for Public Affairs for the FBI, advising them she wanted to “flag a story” about “a casual, unscheduled meeting between former President Bill Clinton and the AG.” And she provides the AG’s talking points,” Judicial Watch added.

“It is jaw-dropping that the Trump administration is blacking out key information about how the Obama Justice Department tried to spin Loretta Lynch’s scandalous meeting with Bill Clinton,” said Judicial Watch President Tom Fitton. “President Trump should order the full and immediate release of these materials.”

The government watchdog group also said on Friday, “We have begun to see how the Trump administration responds over time to Freedom of Information Act (FOIA) queries, especially our requests regarding shady dealings in the Obama administration. We aren’t encouraged. One must wonder if Obama holdovers at the Department of Justice (DOJ) are still calling the shots, or whether President Trump’s appointees simply don’t care about battling government corruption and enforcing the rule law.”

Read the entire week’s update on the document release at Judicial Watch.