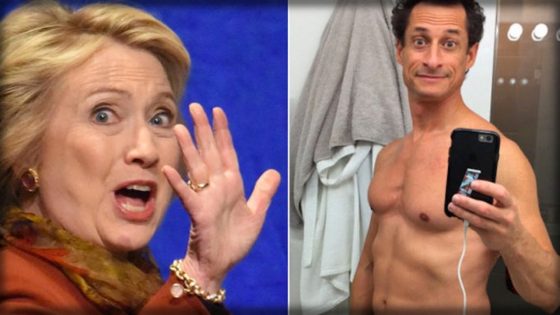 Anthony Weiner — the former Congressman (D-NY); husband (still) of Hillary Clinton’s close aide Huma Abedin; and irrepressible exhibitionist who sex-texts and sent pics of his penis to females, including an underage teen — has no friends.

Anthony Weiner takes lewd pic of himself in the Congressional gym

“Anthony Weiner might have more friends in prison than he does now in the Union Square building where he’s been living with his son, Jordan, 5.

‘Nobody speaks to him. He is truly ostracized,’ one source told me. ‘People won’t even get on the elevator with him.’”

But the wiener is ostracized not for the reason you think. His neighbors won’t speak to him because:

“Most of Weiner’s neighbors were Hillary Clinton supporters, and blame him for her loss because former FBI Director James Comey reopened the investigation into her e-mails after the feds seized Weiner’s computer.”

In other words, Democrats care neither about morality nor the law. For them it’s all about political power.

And that’s another reason why I call them Demonrats.