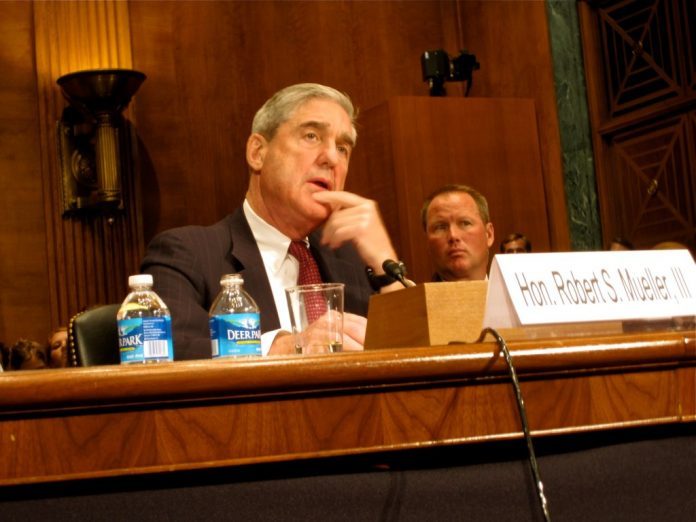 (INTELLIHUB) — With the recent news that special counsel Robert Mueller has called upon a grand jury to “advance” the narrative of President Trump and Russia, it has become increasingly important to expose the man behind the investigation itself.

Mueller, a close personal friend of fired former FBI Director James Comey, has a long history of working directly with and for the globalist establishment, including numerous public connections to the Clinton family.

While one could go on and on discussing Mueller’s history, this article will focus on his direct connections to the Clinton’s, how that could be swaying who he hires, and the stunning fact that the so-called investigation itself has actually turned into a pathetic “witch hunt” to take out the president.

Robert Mueller has a personal history of working and helping the Clinton family, a fact that the mainstream media has either downplayed or told their readers to ignore. (Russia!!!)

“During Mueller’s term as FBI Director, the FBI dismissed repeated “pay-to-play” accusations that Frank Giustra paid the Clintons millions of dollars to induce Bill and Hillary to wield public influence in the United States, Kazakhstan and Russia, to assist Giustra in a complex scheme that ended up with Giustra’s Canadian company, Uranium One, controlling some 20 percent of all the uranium mined in the United States.”

In a heavily cited report published by Intellihub News, Shepard Ambellas wrote about a recent Wikileaks release that revealed yet another strange connection between Mueller and the Clintons while also providing further details on the Clinton Uranium deal to Russia.

“The secret “action request,” dated Aug. 17, 2009, was sent out by Secretary of State Clinton and was addressed to the United States Ambassador to Georgia Embassy Tbilisi, the Russian Embassy, and Ambassador John Beyrle. It proposed that FBI Director Robert Mueller be the one that personally conduct the transfer a 10-gram sample of HEU to Russian law enforcement sources during a secret “plane-side” meeting on a “tarmac” in the early fall of 2009,” wrote Ambellas.

In his own report, Corsi noted that, “Particularly troubling in Clinton’s diplomatic cable of Aug. 17, 2009, detailing Mueller’s clandestine mission is the detail that appropriate arrangements “need to be made to ensure the transfer of the material is conducted at the airport, plane-side, upon the arrival of the Director’s [Mueller’s] aircraft.”

Again, these stunning revelations have been downplayed or ignored by a corporate press hellbent on taking out the rightfully elected president. (regardless if you agree with his policies or not, this is a fact)

Despite widespread praise in the mainstream media, the team of lawyers Mueller has hired for the “Russian investigation” include at least 8 Democratic operatives, some with actual ties to the Clinton’s themselves.

“Bob Mueller’s obviously intent on hiring people who are antagonistic toward this administration. He’s one of Mr. Comey’s closest friends, and it looks like there’s a deliberate orchestration to damage or undermine the president regardless of the basic facts”

“The Daily Caller previously reported that the seven other Democratic attorneys working with Mueller have donated a little over $60,700 to Democratic campaigns.”

Trump himself has spoken about this clear conflict of interest, telling Fox News in June that, “I can say that the people that have been hired are all Hillary Clinton supporters. Some of them worked for Hillary Clinton. I mean the whole thing is ridiculous, if you want to know the truth, from that standpoint.”

Recent media reports have confirmed what many have long feared. The entire so-called investigation, led by Mueller, is actually a complete sham and nothing more than a transparent fishing expedition with a specific goal of finding wrong doing by Trump or his associates.

“Desperate to politically damage President Trump to lay the grounds for impeachment, Robert Mueller’s investigation into “Russian collusion” now includes material “unconnected to the 2016 elections” and even includes tenants who stayed in Trump Tower over the last six years,” wrote Paul Joseph Watson.

“Sources told CNN that a “potential prosecution” could be secured not by way of evidence that proves Russia schemed with the Trump campaign to swing the election (which is supposedly the entire focus of the investigation), but by proving past financial improprieties by Trump-owned business interests.”

To top things off, Pulitzer Prize winning journalist Seymour Hersh has confirmed a fact that many in the alternative media have pursued for months. The entire Russian narrative is a mainstream media fueled, deep state disinformation campaign.

At this point it is strikingly obvious that Mueller’s “investigation” is gunning for a direct hit on the White House. One can only imagine what it will be and when it will come.