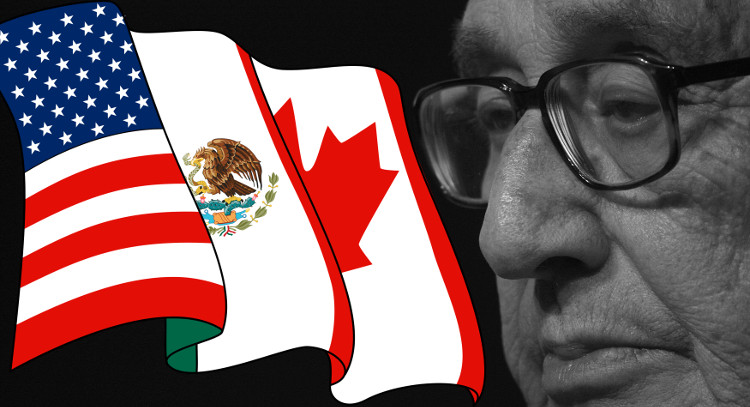 Just how important is the North American Free Trade Agreement (NAFTA) in the general scheme of things? This is a question that the head of The John Birch Society, Arthur Thompson has addressed, and we should give heed to what he is saying.

NAFTA was on the radar as President Donald Trump entered the White House saying that it was a bad deal for Americans and would be renegotiated.

, interestingly signed by Trump’s then presidential opponent’s husband, Bill Clinton (though it was negotiated by George H. W. Bush

), was the worst trade deals in the history of the united States.

Trump promised that NAFTA would be one of his first things he dealt with in his first 100 days of office.

This leads us to Art Thompson’s commentary concerning Henry Kissinger and NAFTA.

“It will represent the most creative step towards a new world order taken by any group of countries since the end of the Cold War… The revolution sweeping the Western Hemisphere points to an international order based on cooperation… It is this revolution that is at stake in the ratification of NAFTA.” -Henry Kissenger, Los Angeles Times, 1993

Thompsons quoted Kissinger from the Los Angeles Times as saying that what Congress had before it in NAFTA was “not a conventional trade agreement, but the architecture of a new international system.”

NAFTA is a major step towards bringing the United States into a world government.

Kissinger seems to have known at least ten years before anyone else that the Americas were going Marxist, according to Thompson, who said that country after country south of our border was already headed in that direction.

Sadly, we had been headed in that direction as well, it’s just taken us a bit longer to travel down that road.

“He seemed to understand that revolution was already occurring and wanted to have us part of it,” said Thompson. to pave the road to the New World Order’s tribunals have been set up by

“To pave the road to the New World Order, tribunals have been set up by NAFTA, which applies the layer of jurisprudence over and above our country’s courts system,” Thompson warned.

“In an article in The New York Times in April 18, 2004, a variety of legal minds were aghast at the implications,” he added. “John D. Echeverria, law professor at Georgetown University said this quote of the NAFTA tribunals, ‘This is the biggest threat to the United States judicial independence that no one has ever heard of and even fewer people understand.”

Thompson then added these quotes

“It is rather shocking that the highest courts of the state and federal governments could have their judgments circumvented by these tribunals.” -Chief Justice Ronald George of the California Supreme Court

This is the architecture of the new international system, higher than our state and federal courts, that Kissinger was writing about and promoting. this is NAFTA

This is NAFTA, but it’s only the beginning of the problem of NAFTA.

Thompson pointed to a case in North Carolina where there was a coalition of unions from the US, Mexico and Canada that went to a NAFTA tribunal to challenge the right-to-work laws in North Carolina.

“You know if they have to appeal that, you know who they appeal to?” Thompson asked. “The International Court. Not the Supreme Court. Not the state court. And they can be forced to have those laws overturned through these tribunals.”

That is the problem we’re dealing with in NAFTA.

NAFTA doesn’t just threaten jobs and the economy, but our security, as well.

“In addition, our free trade agreements such as CAFTA and the former FTAA are all founded on the grandfather of them all, NAFTA,” Thompson said. “Once both houses of Congress approved NAFTA, they gave them, they gave NAFTA a blank check and a blank piece of paper to do whatever they wanted to do in the name of free trade.”

This is why we can’t simply renegotiate NAFTA, we must abolish and abandon it.

“Simply put, we cannot stop immigration, the North American Union, preserve the Constitution, work through Congress or any other aspect of our struggle until we get rid of NAFTA because it’s becoming the law of the land,” Thompson warned. “It’s already the law of the land. It’s carte blanche law and a lot of people don’t realize that until you get in and look at all the documents that are carrying this internationalism forward in this country.”

However, Thompson believes that these tribunals could be used for even worse things such as shutting down private initiatives like the Minutemen, if that’s what they desired to do.

“They’ve got that kind of power now,” he said. “They’re just not ready to use that power. Yet, they’re doing it incrementally, slowly it’s just like Gulliver in the Lilliputians. NAFTA’s slowly laying those little chords on the giant of the American public and the American public is generally asleep.

The American people know something is wrong, but they just can’t seem to put their finger on the problem.

He then quoted the prophet Isaiah, who said,

Therefore, my people are gone into captivity, because they have no knowledge: and their honourable men are famished, and their multitude dried up with thirst. -Isaiah 5:13

“The people have allowed their eyes to be diverted, thinking that NAFTA was an economic thing and it’s not,” Thompson said. “It’s a freedom thing, and that’s what we have to show them.”

“What we see in NAFTA is the strings of slavery,” he added. “The bottom line is this: If we do not get rid of NAFTA, everything else we do will be for naught. We cannot stop the North American Union unless we get rid of NAFTA because if we could stop the North American Union, they could put a different name on it. They might not put a name on it at all, but keep the initiative going forward slowly, tightening the regulations slowly, merging medical services and steel regulations and all the transportation lanes and etc etc etc.”

“So, one day you wake up and realize we’ve merged and you didn’t even know it,” he continued.

Thompson delivered the problem, which is the easy part, but how do we solve the problem? How are we going to get rid of NAFTA?

“We’re going to do it the same way we’ve done it in the past,” said Thompson.

He gives four way to accomplish the defeat of NAFTA.

While Thompson does not want to disregard the man on the street because, after all, these are the very people we are attempting to wake up, warn and save in the process, the reality is that local representatives are key in this battle.

Thompson is simply speaking of the people taking responsibility for the direction of our country rather than relying on someone else.