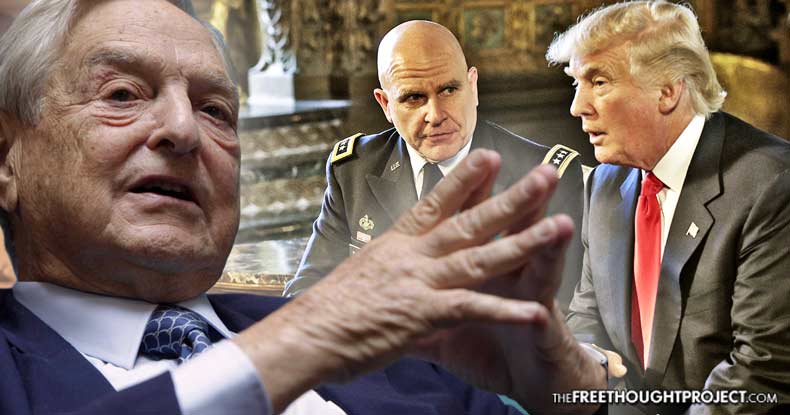 Tel Aviv, Israel – Stunning news out of Israel has revealed that National Security Advisor H.R. McMaster is working as an inside operative for globalist billionaire George Soros, according to numerous domestic and foreign intelligence sources.

“I have confirmed from sources from inside the White House, the Israeli government and Israeli intelligence that the Israelis have intercepted email communications from General McMaster to George Soros, informing him of everything that’s going on inside the White House,” reported long time political operative Roger Stone. “…I have double checked this with two different sources very high up in Israeli intelligence, and I actually expect the Israeli ambassador to the US to confirm this.”

Interestingly, when Trump visited Israel on his first overseas trip, McMasters was curiously excluded from the meeting with Israeli Prime Minister Benjamin Netanyahu and his national security team, which broke from standard protocol.

According to Kafe Knesset, Trump met with Netanyahu, starting with a one-on-one meeting. The forum was soon expanded by several advisors on each side, including Jared Kushner, Jason Greenblatt and Ambassador David Friedman on the U.S. side, according to Israeli officials.

Secretary of State Rex Tillerson was later invited into the meeting, per an official, but “McMaster sat outside the King David room during the course of the entire meeting.”

One former U.S. officials told Kafe Knesset that the national security advisor’s exclusion from the meeting was “highly unusual.”

“For the President to prioritize his son-in-law and his lawyer over the National Security Advisor for these kind of strategic discussions is unconventional, to say the least,” an official said.

Now, perhaps we know why.

According to an investigation by Breitbart:

The International Institute for Strategic Studies (IISS), where White House National Security Adviser H.R. McMaster is listed as being a member for eleven years, this week added George Soros’s Open Society Foundations and another Soros-financed group to the list of donors on its website in response to a Breitbart News request on the matter.

From September 2006 to February 2017, McMaster is listed as a member of International Institute for Strategic Studies (IISS), where he served as consulting senior fellow. The IISS describes itself as a “world-leading authority on global security, political risk and military conflict.”

Just last month, Israel publicly accused Soros of attempting to continuously destabilize legitimately elected governments to forward his own agenda. With these latest revelations, it’s become clear that McMasters has become one of the main conduits for strategic leaks to the mainstream media – in an effort to undermine Trump’s foreign policy goals.

Do not mistake this as an endorsement of Trump’s foreign policy. However, it is important to shed light on the dark hands behind the scenes that are pulling the strings of the deep state.

Israel’s Ministry of Foreign Affairs criticized the billionaire globalist when it spoke out against the vandalism of anti-Soros posters in Hungary, which were defaced with anti-Semitic graffiti.

“Israel deplores any expression of anti-Semitism in any country and stands with Jewish communities everywhere in confronting this hatred,” stated Foreign Affairs Ministry spokesperson Emmanuel Nahshon. “In no way was the statement meant to delegitimize criticism of George Soros, who continuously undermines Israel’s democratically elected governments by funding organizations that defame the Jewish state and seek to deny it the right to defend itself.”

Soros’ infiltration of the National Security Council began with operative Fiona Hill, a member of the Council on Foreign Relations and the Soros-funded Eurasia Foundation, in May of this year.

“George Soros has penetrated the Trump White House,” Stone reported. “Soros has planted a mole infiltrating the National Security apparatus: a woman named Fiona Hill, who has a Harvard background, and has been on the Soros payroll and the payroll of the Open Society Institute.”

Previously, Hill had assisted the Soros-founded Central European University in Hungary to attempt to influence Hungarian government policy, as the government has steadfastly attempted to rebuff Soros’ interference, while refusing to abide by EU migrant quotas.

“We got unequivocal support [from Fiona Hill’s team at the National Security Council],” said CEU’s rector Michael Ignatieff. “I went up on the Hill and spoke to Republican senators and staff. There is a tiny ledge of commonality between Republicans and Democrats, and academic freedom is one issue that unites them both.”

Of course, “academic freedom,” in this context, is likely a misnomer, and more appropriately perceived as simply another strategic angle from which Soros can attempt to forward his globalist political agenda – as academic institutions are regularly used by the power-elite to steer government policy.

According to Mike Cernovich, who has been working tirelessly to expose McMasters as a globalist operative opposed to Trump’s ostensible America first agenda:

H.R. McMaster has been insulting Trump in front of foreign leaders. McMaster expressed his disapproval of Trump’s course to foreign officials during the lead-up to his trip to Germany. The general specifically said he’d disagreed with Trump’s decision to hold an Oval Office meeting in May with top Russian diplomats and with the president’s general reluctance to speak out against Russian aggression in Europe, according to the three foreign officials.

McMaster refuses to get rid of Obama holdovers who spied on Trump. Derek Harvey was the key figure when it came to the Middle East. He was against the Iran Deal and the funding of Palestinian Authority terror. He called out Islamic Jihad. He tried to force out the Obama holdovers running our foreign policy. And now he’s gone.

Through the campaign, candidate Trump tapped into a deep vein of concern among many citizens that America is at risk and slipping away. Globalists and Islamists recognize that for their visions to succeed, America, both as an ideal and as a national and political identity, must be destroyed. … Islamists ally with cultural Marxists because, as far back as the 1980s, they properly assessed that the left has a strong chance of reducing Western civilization to its benefit.

McMaster is clearly a grave threat to the national security of the United States. So, who is really running the US government?

For more information about the soft coup being perpetuated by McMasters and Soros, check out McMasterFacts.com or McMasterLeaks.com