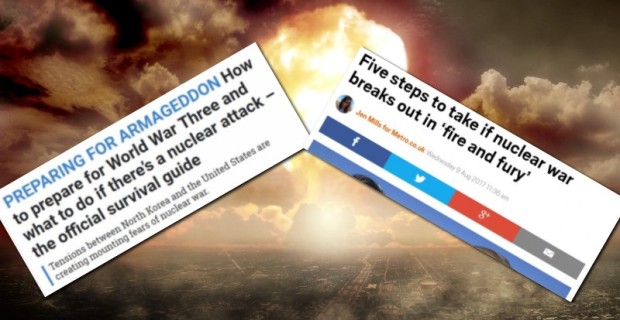 With tensions between the United States and North Korea once again on the rise, Britain’s two biggest newspapers are warning citizens in the UK how to prepare for nuclear war.

The Metro and the Sun both published feature length articles Wednesday advising the public on what measures to take in the event of “World War III”.

The Sun notes that, “The UK Government is now working on a new alert system to prepare Brits for the horror of a nuclear war,” before advising Brits to build an emergency supply kit and find out where their nearest nuclear fallout shelter is located.

The article also advises people what to do during and after a nuclear blast and how to avoid nuclear fallout.

The Metro article points to Department of Homeland Security guidelines on “how to react in a nuclear strike,” adding, “It might be worth familiarising yourself with it.”

“Getting underground is your best chance of survival, perhaps finding a basement or going down to a tube station platform,” states the article.

The two newspapers have substantial circulation in the United Kingdom. The Metro is the biggest weekday newspaper by daily circulation, reaching nearly 1.5 million people. The Sun is in second place with a circulation of around 1.47 million.

The Metro is a free newspaper that is distributed across busy transport networks in London and other major cities, with employees sometimes paid to hand out copies.

President Donald Trump yesterday warned Kim Jon-un that he would be met by “fire and fury” if North Korea continued to threaten the United States.

North Korea responded by threatening preemptive military strikes on the US Pacific territory of Guam, vowing to “turn the US mainland into the theater of a nuclear war.”