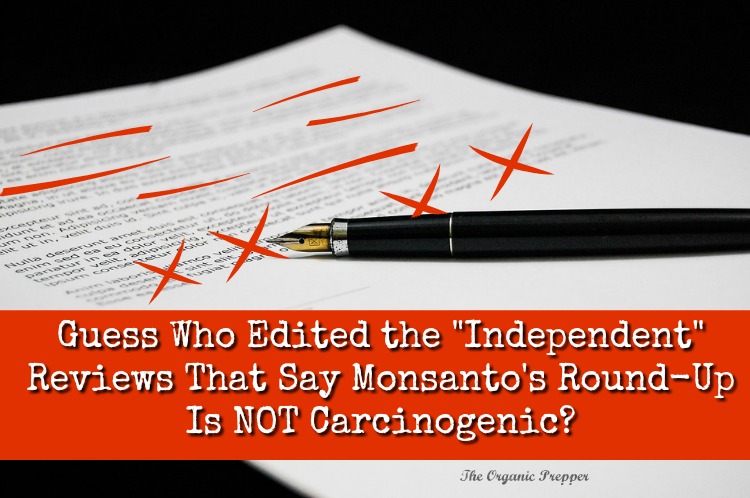 New reviews have shown that Monsanto’s Round-Up is not carcinogenic. The weed killer is perfectly safe, despite the World Health Organizations proclamation in 2015 that glyphosate, the primary ingredient in Round-Up, was “probably” carcinogenic.

This proclamation was met with outrage from Monsanto and a series of “independent” reviews that all agreed that the World Health Organization was wrong.

Dozens of internal emails that the company probably wished had vanished into the cyber-ether have recently been released in a court hearing by plaintiffs suing Monsanto:

Dozens of internal Monsanto emails, released on Aug. 1 by plaintiffs’ lawyers who are suing the company, reveal how Monsanto worked with an outside consulting firm to induce the scientific journal Critical Reviews in Toxicology to publish a purported “independent” review of Roundup’s health effects that appears to be anything but. The review, published along with four subpapers in a September 2016 special supplement, was aimed at rebutting the 2015 assessment by the International Agency for Research on Cancer (IARC) that glyphosate is a probable human carcinogen. That finding by the cancer-research arm of the World Health Organization led California last month to list glyphosate as a known human carcinogen. It has also spurred more than 1,000 lawsuits in state and federal courts by plaintiffs who claim they contracted non-Hodgkin lymphoma from Roundup exposure. (source)

In the emails, we discover that Monsanto funded a review by Intertek Group Plc’s consulting unit, entitled “An Independent Review of the Carcinogenic Potential of Glyphosate.” One must wonder how independent a review so-funded could be and how much we can trust the claims that Monsanto’s Round-Up is not carcinogenic.

According to Monsanto, very independent. Their Declaration of Interest statement said:

The Expert Panelists were engaged by, and acted as consultants to, Intertek, and were not directly contacted by the Monsanto Company. Neither any Monsanto company employees nor any attorneys reviewed any of the Expert Panel’s manuscripts prior to submission to the journal.” (source)

But just like in the Clinton campaign, those darned emails came back to haunt them like the Ghost of Cancer Victims Past. Bloomberg reports:

The correspondence shows the company’s chief of regulatory science, William Heydens, and other Monsanto scientists were heavily involved in organizing, reviewing, and editing drafts submitted by the outside experts. At one point, Heydens even vetoed explicit requests by some of the panelists to tone down what one of them wrote was the review’s “inflammatory” criticisms of IARC.

“An extensive revision of the summary article is necessary,” wrote that panelist, John Acquavella, an epidemiologist at Aarhus University in Denmark, in a February 2016 email attached to his suggested edits of the draft. Alarmed, Ashley Roberts, the coordinator of the glyphosate papers for Intertek, forwarded Acquavella’s note and edits to Heydens at Monsanto, with the warning: “Please take a look at the latest from the epi(demiology) group!!!!”

Heydens reedited Acquavella’s edits, arguing in six different notes in the draft’s margin that statements Acquavella had found inflammatory were not and should not be changed, despite the author’s requests. In the published article, Heydens’s edits prevailed. (source)

Monsanto has a history of skewing the science.

How can we believe anything from such a biased source? And it isn’t like this is the first time Monsanto has been busted for toying with the science.

Of course, Monsanto has a long history of rewriting science when it gets in the way of profits. Who can forget the Seralini study, in which rats fed nothing but Round-Up Ready corn developed massive and horrific tumors?  Then, once the study became common knowledge, Dr. Seralini was publicly shamed and vilified. His work was pulled from the journal in which it was published, Food and Chemical Toxicology. But the fact of which many people were unaware was that the new editor of the journal who pulled the review, Richard Goodman, was hired straight from the hallowed halls of Monsanto.

As well, Monsanto recently sullied scientific research with a contract barring certain testing from being performed. A new  product that they’d like to introduce to the market is called XtendiMax. While they supplied samples of the product to research departments of the University of Arkansas, University of Missouri and the University of Illinois, the researchers were bound contractually NOT to test the volatility of the product. (“Volatility measures the product’s tendency to vaporize and drift across fields.” source)

I don’t believe for one second that Monsanto’s Round-Up is not carcinogenic.

The repeated infractions mean that you certainly can’t trust any pro-Monsanto studies, and in fact, does more to undermine any potential trust a person might have in any product birthed from that company. Any sensible person would likewise have to mistrust claims that Monsanto’s round up is not carcinogenic. They’ve even been caught hiring internet trolls to combat their negative image, unleashing them on blogs and websites that post the truth about their deadly products.

In fact, you have to wonder whether Monsanto is single-handedly responsible for the giant American Cancer Cluster that means every other person in the country will one day suffer from cancer, earning the cancer industry well over 124 billion dollars per year.

Oh – and you certainly can’t expect the EPA to stop them. After irrefutable evidence of toxicity and death from Round-Up, those guardians of the environment actually raised the allowable level of glyphosate on food crops.

Between their genetically modified crops that are designed to survive every-higher inundations of toxic weed killers and the widespread use of Round-up, they just may be the death of us all as they pretend to benevolently feed the world.