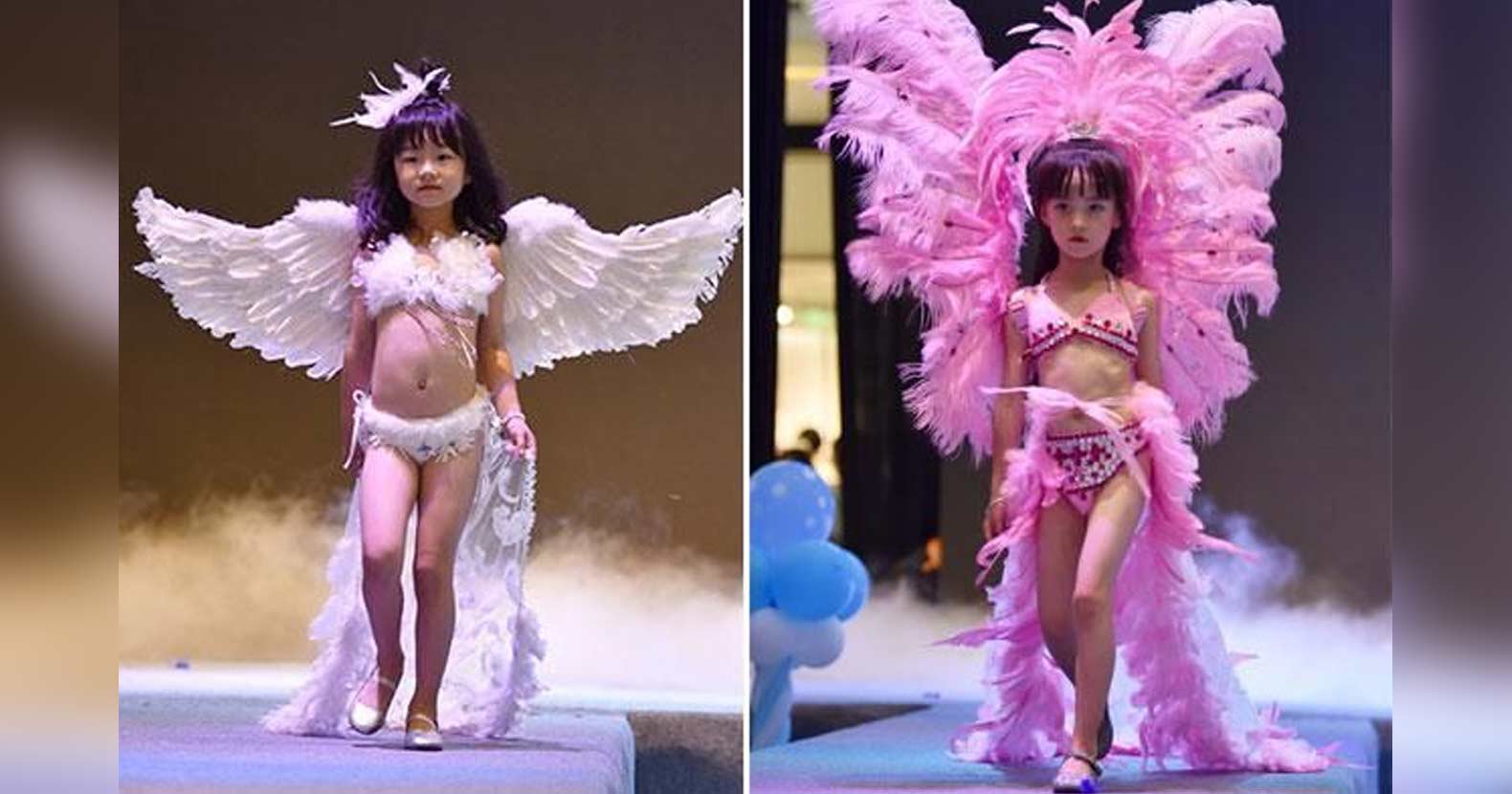 The latest movement within media and Hollywood pop culture is a distinctive agenda to normalize pedophilia and the sexualization of children. The latest example of this growing trend within mainstream media is a fashion show that many feel crossed the line from – with scantily clad girls, who appear to be as young as five-years-old, walking the runway in a Victoria’s Secret–style show.

The show, held at a shopping mall in China, revealed shocking images of young girls wearing nothing but lingerie, costume wings, and headpieces. This comes on the heels of Kim Kardashian sparking controversy last month after she posted images of her new children’s line, which included a bikini and lace slip dress.

What you see talking place is simply the latest manifestation of what is, without question, a creeping agenda within the mainstream of pop culture to normalize and force public acceptance of pedophilia.

We’ve previously reported on the constant drive within pop culture to normalize pedophilia:

In the current age of political correctness, some sects of society know no limits as to how far they will go to force acceptance to avoid offending others. In one extreme case of forcing such political correctness, Salon magazine implies that society must be accepting of pedophiles. In two separate articles, Salon refers to pedophilia as an ‘alternate sexual preference’ and suggests that society should embrace these differences by insinuating that this poor man is just misunderstood.

The article and video on Salon deal with pedophiles known as ‘non-offending’ — meaning while these individuals admit they are sexually attracted to prepubescent children, they claim they’ve never acted on it. However, the subject of one Salon article, Todd Nickerson admitted to seeking out jobs as a babysitter and noted that he “fell in love” with a five-year-old whom he babysat.

The U.S. corporate mainstream media is, without a doubt, the most sophisticated propaganda operation in the history of humankind, according to political philosopher Noam Chomsky, author of Manufacturing Consent: The Political Economy of Mass Media.

The mainstream media works diligently to alter and shape our perceptions and values. It seems clear that the propagandists are attempting to engineer a society that is accepting of pedophilia as a normalized behavior.

Both Elijah Wood and Corey Feldman have publicly discussed the fact that Hollywood is a den of pedophilia – noting that numerous powerful moguls and others within the Hollywood scene prey on the vulnerable like “vultures.”

Revealing exactly how the normalization propaganda operates, the New York Times published an op-ed proclaiming that pedophilia is “not a crime” – instead sympathetically characterizing pedophilia as a “disorder” that “these people [pedophiles] are living with.”

The sell is that people who rape, or who fantasize about exploiting or raping children are portrayed as victims living with a condition that they have little choice over. The article goes on to insert tidbits about “recent studies,” which is an appeal to authority meant to imply that the author’s normalization agenda is backed by science.

Thus, claims such as: “Men with pedophilia are three times more likely to be left-handed or ambidextrous, a finding that strongly suggests a neurological cause,” leaving readers to discern the credibility of the author’s opinion based on an unprofessional interpretation of the actual study.

Essentially, the idea being forwarded is that people who want to have sexual relations with children are suffering from a “disorder,” and thus are not subject to a moral evaluation, but instead are in need of compassion. The idea that pedophilia is a “condition,” rather than an internal mental process involving desires and attitudes, leaves the pedophile blameless.

It’s clearly a sign of the times when the New York Times devotes more time to making excuses for pedophilia than it does defending innocent and victimized children!

Interestingly, the CEO of the New York Times, Mark Thompson, was involved in the cover-up of cases involving British child rapist Jimmy Saville — who raped as many as 500 children over the coarse of his career – while being protected by media moguls and celebrities alike.

Further revealing the nefarious agenda, when recent news broke of a massive pedophile ring being busted in Norway, numerous mainstream outlets deleted published reports on it – including the Washington Post, ABC News, and the New York Times.

Actions such as these give pause as to what exactly is the agenda of these major media outlets engaging in such actions.