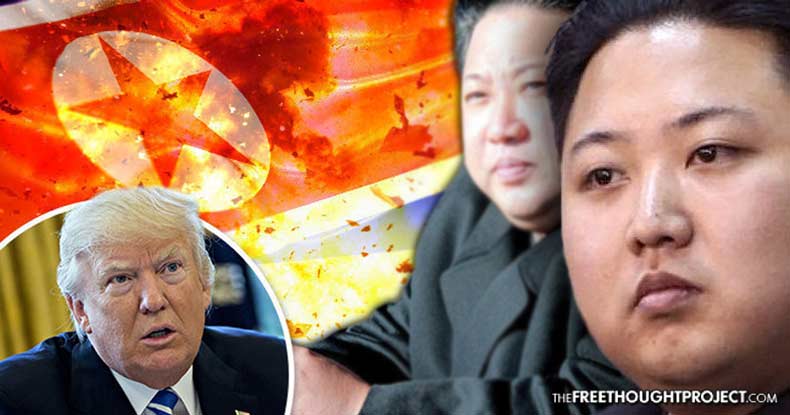 After years of threatening to carry out a nuclear attack on the United States, North Korea is finally closer than it has ever been to fulfilling its notorious threat—according to politicians and mainstream media outlets across the country. But according to one geopolitical analyst, Americans should be more concerned about the possibility of a false flag attack.

In a report for Asia Times, analyst Pepe Escobar noted that the same people who are now saying that North Korea has created a miniaturized nuclear warhead capable of fitting its recently tested ICBM are the people who sold the lie that Saddam Hussein had weapons of mass destruction in Iraq.

“Western corporate media would hardly refrain from metastasizing pure speculation into a ‘North Korea has miniaturized nuclear weapons’ frenzy consuming the cable news cycle/ newspaper headlines,”Escobar wrote, noting that the latest rumors about North Korea’s nuclear capabilities stem from a recent report from Japan’s Defense Ministry that is based entirely on speculation.

“So let’s look at the agendas in play. The War Party in the US, with its myriad connections in the industrial-military-media complex, obviously wants/needs war to keep the machinery oiled. Tokyo, for its part, would much appreciate a pre-emptive US military attack—and damn the inevitable, massive South Korean casualties that would result from Pyongyang’s counterpunch.

It’s quite enlightening that Tokyo, for all practical purposes, considers China as a ‘threat’ as serious as North Korea; Defense Minister Itsunori Onodera went straight to the point when he said, ‘North Korea’s missiles represent a deepening threat. That, along with China’s continued threatening behavior in the East China Sea and South China Sea, is a major concern for Japan.’ Beijing’s response was swift.”

One of the most important points Escobar makes is that “The War Party,” or the U.S. military industrial complex, “wants/needs war to keep the machinery oiled.” Because of this, Escobar warned that Americans should “Beware of an engineered false flag, to be blamed on Pyongyang; that would be the perfect pretext for war.”

Indeed, the war drums are already having a steroid-like effect on the bottom lines of weapons companies with Lockheed Martin breaking all time stock market records.

In addition to being a large opium producer, Escobar also noted that North Korea ”holds trillions of US dollars in unexplored mineral wealth.” He warned that Americans should “Watch the shadow play by candidates bound to profit from such juicy loot.”

Hogwash! If N. Korea is Trump's defining moment, then the banksters that want into that country will be happy!… https://t.co/r8PzqRUUru

As The Free Thought Project reported, another important aspect to note is that while North Korea has been threatening to show the world its true nuclear power for more than a decade, the U.S. has enabled and funded the nation’s actions for more than half a century. As a result, “if North Korea does ever launch a nuke, it will be because the U.S. government and its assets helped to put it in their hands.”

The fact that the U.S. government and the mainstream media have come together to promote the “imminent threat” of North Korea carrying out a nuclear attack on the U.S., serves a reminder of another time when the two entities united to push a propaganda campaign that got the U.S. into a war it is still fighting 14 years later.

Despite dire warnings from both politicians and MSM pundits that Hussein had weapons of mass destructions in Iraq, a classified report that was leaked in January 2016 confirmed that there was absolutely no evidence of WMDs. It also served as a reminder of the “utter deception carried out on the American people to support the invasion.”

At the end of the day, if the U.S. was truly concerned about North Korea launching a nuclear attack, then it would not have been funding the nation’s actions in the first place, and the supposed imminent threats would be based on more than just speculative reports. If there are reports of such an attack, it is important to remember how well false flags—such as Iraq’s WMDs—have worked for the U.S. War Machine in the past.