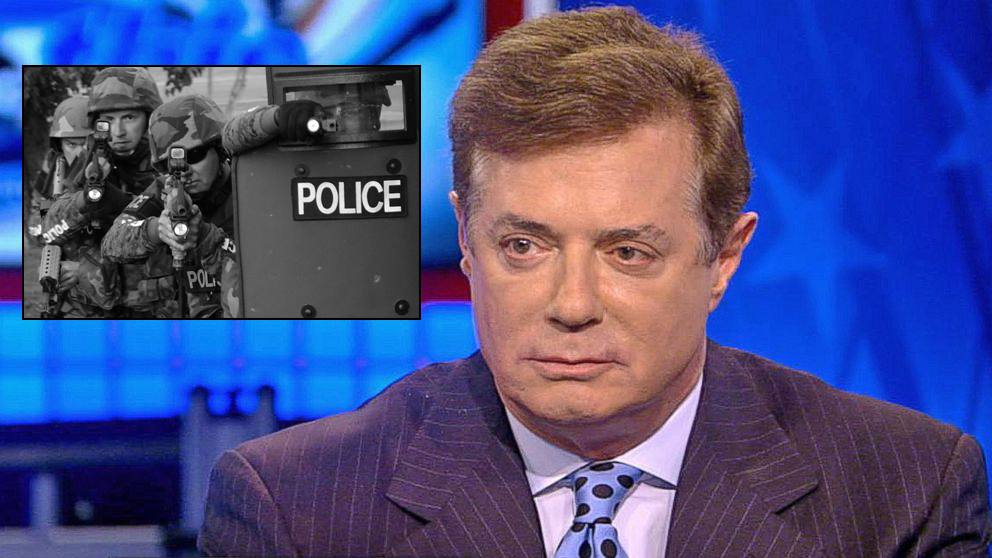 FBI agents raided the Alexandria home of President Trump’s former campaign chairman late last month, using a search warrant to seize documents and other materials, according to people familiar with the special counsel investigation into Russian meddling in the 2016 election.

Federal agents appeared at Paul Manafort’s home without advance warning in the predawn hours of July 26, the day after he met voluntarily with the staff for the Senate Intelligence Committee.

The search warrant was wide-ranging and FBI agents working with special counsel Robert S. Mueller III departed the home with various records. Jason Maloni, a spokesman for Manafort, confirmed that agents executed a warrant at one of the political consultant’s homes and that Manafort cooperated with the search. Manafort has been voluntarily producing documents to congressional committees investigating Russia’s interference in the 2016 presidential election. The search warrant indicates investigators may have argued to a federal judge they had reason to believe Manafort could not be trusted to turn over all records in response to a grand jury subpoena.

It could also have been intended to send a message to President Trump’s former campaign chairman that he should not expect gentle treatment or legal courtesies from Mueller’s team.

This is an act of terroristic intimidation.

They’ve come up with zero evidence of collusion after eight months and yet they’re raiding Manafort’s home to “send a message.”

The documents included materials Manafort had already provided to Congress, said people familiar with the search.

“If the FBI wanted the documents, they could just ask [Manafort] and he would have turned them over,” said one adviser close to the White House.

[…]The significance of the records seized from Manafort’s apartment is unclear.

Manafort has provided documents to both the Senate Judiciary Committee and the Senate and House intelligence committees. The documents are said to include notes Manafort took while attending a meeting with Donald Trump Jr. and a Russian lawyer at Trump Tower in June 2016.

Emails show Trump Jr. took the meeting and invited Manafort after he was promised the lawyer would deliver damaging information about Hillary Clinton as part of a Russian government effort to assist his father’s campaign.

Just so were clear here:

The FBI did not raid the Clintons despite massive evidence of pay for play and selling access through the State Department in exchange for massive donations to her and her husband from foreign entities, all of which dried up the second she lost the presidency. (As I noted yesterday, Mueller similarly cashed in on his “public service” with speeches to Goldman Sachs and other foreign banks).

The FBI did not raid the Democratic National Committee and demand they turn over their servers which were hacked supposedly by hostile foreign powers, but instead took the word of the shady company they hired, CrowdStrike, that “Russians” hacked them and ran with that claim, without proof, to create the witch hunt which is still going to this day.

The FBI did not raid Debbie Wasserman Schultz despite her employing Imran Awan and threatening police not to investigate what’s on his, or potentially her laptop that was seized from her office.

They also didn’t even raid Awan until months and months after his shady business was exposed, only choosing to act a few weeks ago after an article in The Daily Caller went viral.

The FBI did not raid James Comey despite his admitted leaking to get his friend Robert Mueller appointed as a special counsel.

The FBI did not raid Susan Rice, Samantha Power or Ben Rhodes despite their unmasking Trump associates so deep state leakers could illegally leak classified intelligence endlessly to the media.

The FBI did raid Paul Manafort to “send a message.”

This is a criminal conspiracy by the deep state to overthrow our democratically elected president and subvert the will of the American public who handed Trump the presidency in an electoral landslide.

Robert Mueller needs to be fired immediately and he and James Comey, James Clapper and John Brennan should be brought up on charges for trying to organize a coup.