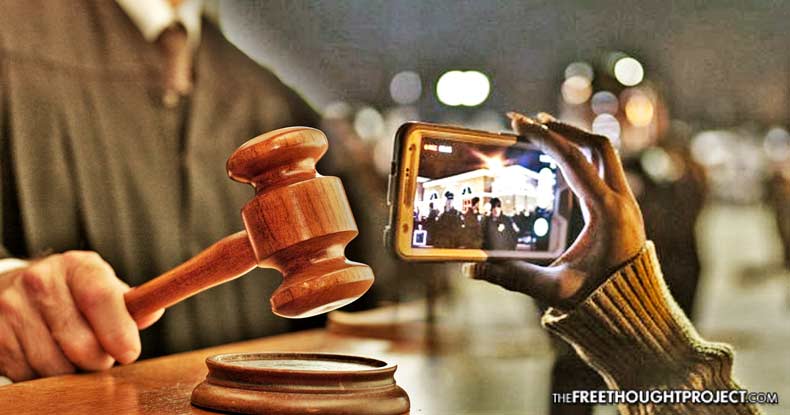 Contradicting the rulings of six other federal courts, the Eighth Circuit Court of Appeals annihilated free speech rights in upholding a district court decision stating citizens do not have the right to film public officials — politicians, police, and others — in public.

In affirming the decision of the lower court to dismiss, the Eighth Circuit effectively ended free speech activist Matthew Akins’ challenge to the Columbia, Missouri, Police Department, which he accuses of unlawfully stopping and arresting him on multiple occasions — though nearly all charges were later dropped — as he filmed their encounters with the public, in public.

Akins says the spate of arrests and harassment from law enforcement is brazen retaliation for the nature of his activist work — filming officers on the job.

As a journalist and founder of Citizens for Justice in 2011, a group committed to monitoring police for accountability purposes, Akins frequently stopped to record officers’ interactions with the general public — a tactic employed by a plethora of civilian impartial observation groups to stem an epidemic of police violence and veritable impunity in courts, so common to law enforcement officers who misbehave.

Judge Nanette Laughrey penned in the stunning decision Columbia Police officers indeed had probable cause to arrest Akins each time, and — again, contrary to previous rulings from six circuit courts —that “he has no constitutional right to videotape any public proceeding he wishes to.”

Attorney Stephen Wyse already filed an appeal on Wednesday for the court to rehear the case — originally filed against Boone County Prosecutor Dan Knight, two former Boone County assistant prosecuting attorneys, and several members of the Columbia Police Department — as he contendedunequivocally, prior,

“You can’t target journalists because you don’t like their reporting.”

“Wyse took issue with Laughrey’s decision to stay on the case, despite his request she recuse herself. Laughrey’s husband, Chris Kelly, was the head of a city task force on infrastructure, which could have skewed her decisions in a case against the city, Wyse claimed. While federal law does call for a judge’s recusal, the appeals court said nothing in Akins’ case rose to the level of bias or prejudice against his case.”

While the topic of filming the police — of particular interest to law enforcement accountability activists, First Amendment advocates, and others concerned for decaying free speech rights — appeared in federal court before, Laughrey’s ruling goes against precedence established by the First, Third, Fifth, Seventh, Ninth, and Eleventh Circuits, which decided the Constitution guarantees the right to film public officials in public settings, as long as recording does not interfere.

In fact, Judge Thomas Ambro wrote the decision for the Third Circuit Court of Appeals in a similar casecomprised of separate instances in which Philadelphia law enforcement actively thwarted the efforts of two citizens, Amanda Geraci and Richard Fields, to film arrests. Both sued for violations of their civil rights, and — like many other litigants — won.

“The First Amendment protects the public’s right of access to information about their officials’ public activities,” Ambro clarified, adding that access “is particularly important because it leads to citizen discourse” on public and private issues — an exalted exercise of that preeminent protection. The government, ruled the judge, is prohibited constitutionally from “limiting the stock of information from which members of the public may draw.”

American law enforcement, on the whole, has not responded hat graciously to civilians whipping out cell phones and video cameras to record encounters in public — though filming police can indeed provide additional pictorial and audio evidence in the event of contention or disputation.

“Bystander videos provide different perspectives than police and dashboard cameras, portraying circumstances and surroundings that police videos often do not capture,” Ambro continued. “Civilian video also fills the gaps created when police choose not to record video or withhold their footage from the public.”

Laughrey, however, broke ranks in a manner which could portend a precarious existence of certain First Amendment rights — rights which had previously been assumed by the public and averred in peer courts. States comprising the Eighth Circuit are Arkansas, Iowa, Minnesota, Missouri, Nebraska, North Dakota, South Dakota.

“The First Amendment is a core American value,” Wyse asserted in a press statement following the decision’s astonishing departure from precedent. “The right to free speech and a free press are central to our liberty and our ability to hold our government accountable. This holding of the 8th Circuit undermines the basic rights of Missourians and the citizens of the six other 8th Circuit states and undermines the First Amendment rights for all Americans.”

Reports indicate Akins — barring an unlikely rehearing in the Eighth Circuit Court — may indeed appeal his case to the Supreme Court. Because multiple federal judges have upheld the right to film police and public officials as a constitutionally-protected activity on multiple occasions, the ramifications of Laughrey’s ruling may not be as far-reaching and detrimental as appears now — but the ultimate litmus test seems inevitably poised for SCOTUS.

In the meantime, irascible law enforcement officers keen to prevent civilians from filming their activities would do well to remember two crucial points: recording public officials keeps them responsible and accountable for their actions — but can also protect them in situations of disputing claims. After all, raw video recordings — not police, officials, or citizens — have no need of mendacity and duplicity.

“We ask much of our police,” Ambro wrote in the July decision. “They can be our shelter from the storm. Yet officers are public officials carrying out public functions, and the First Amendment requires them to bear bystanders recording their actions. This is vital to promote the access that fosters free discussion of governmental actions, especially when that discussion benefits not only citizens but the officers themselves.”

Laughrey, unfortunately, did not agree — and now the public has yet another constitutionally-protected right left dangling by a fraying thread.