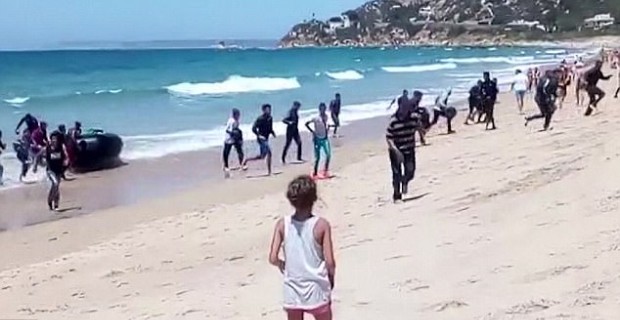 A shocking video shows stunned tourists looking on in fear as a boat load of migrants invade a beach before running away to evade police in Cadiz, Spain.

The clip shows a large group of migrants approaching the beach on a black inflatable dinghy before they make a dash across the sand in a bid to escape authorities.

“Run! Run!” one woman exclaims in Spanish before asking, “What is it? Men?”

Two dozen people in a small dinghy landed in the middle of a tourist-packed beach in Spain.

It is thought the group are Moroccan migrants. pic.twitter.com/wIdcVUGelQ

She instructs her partner to make sure their son is close before the men sprint past.

The group of migrants managed to avoid police, who only arrived after the men were long gone.

“In recent days, migrants have repeatedly stormed the border with Ceuta by either attempting to cut through the wire fencing or running through the border post,” reports the Daily Mail.

This is the third video in recent days to show migrants, almost all of whom are young men, rushing past border controls in Spain on their way to Europe’s welfare havens.

Hundreds of African migrants surged past the Spanish-Moroccan border in Ceuta, in one case horrifically breaking the leg of a guard who tried in vain to stop the intruders.

Another clip from the same incursion shows hundreds of African men, with virtually zero women or children in sight, shouting and screaming as they surge past the Tarajal border.

Spain appears to becoming a more popular route for migrants and may be deluged with more after Italy finally began intercepting NGO boats after evidence emerged they were working directly with criminal people smugglers to act as a taxi service for asylum seekers.

As we previously reported, just 1.4% of migrants who arrived in Italy in the first five months of this year were Syrian refugees and a mere 0.36% were Libyan.

According to the Institute for the Analysis of Multiethnicity (Ismu), 85% of asylum requests in Italy are from men, with only 4% from minors.