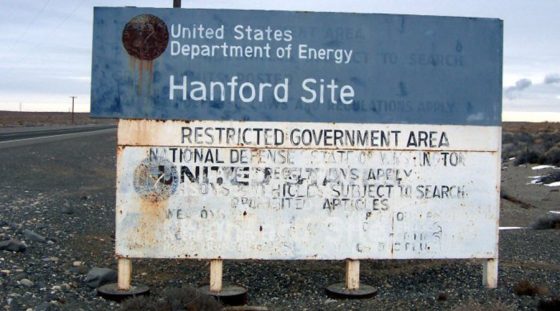 While senior U.S. officials led by President Trump and media pundits sound the alarm over North Korea’s nuclear ambitions, America has been dealing with a series of nuclear leaks domestically that are already exposing the public to radioactive material.

The most recent case is in Washington State, where a radioactive leak at the Hanford Site nuclear facility that began on June 8 was kept secret for two months while contaminating the surrounding area.

Plutonium particles detected as far as three miles away from the decommissioned nuclear Hanford Site in Washington state left workers with headaches and coughs, but officials insist that the nearby public highway is not at risk of contamination.

The radioactive air contamination was recorded on June 8 but wasn’t made public until two months later, when, on Tuesday, Seattle NBC-affiliate KING obtained an internal Hanford memo detailing the findings.

As part of a government-contracted project to clean up and demolish the deactivated plutonium production plant, hundreds of workers travel daily on Rattlesnake Barricade, a turnoff from Highway 240. That is where plutonium and americium, both highly toxic heavy metals, were found, about three miles from the Hanford Site’s contaminated Plutonium Fishing Plant (PFP).

Alarms sounded both inside and outside the PFP on June 8 upon detection of the airborne radiation, the Tri-City Herald reported. A “precautionary take cover” order was sent to some 350 workers around the PFP, but workers in other areas of the Hanford Site were not alerted, KING reported.

“They should have contacted the other contractors and let them know what happened. No one took cover in other facilities and didn’t know what was going on,” an anonymous employee told KING. “I think it was irresponsible not to do more.”

“They downplay a lot of things (at Hanford),” the worker added.

CH2M Hill, the contractor employing the workers, determined they were in good enough shape to “return to work” after the take cover order, the engineering consultancy confirmed to KING.

However, KING cited an unnamed source who was there on June 8 and said some of those returning workers continued coughing and still had headaches.

Radioactive vapor was released when crews were unsealing and resealing old nuclear waste drums, and the vapor traveled beyond the PFP containment zone when another crew was taking down a portion of the Plutonium Reclamation Facility (PRF) at the same time. Some in the area were not wearing proper breathing masks and were exposed.

Air testing was completed the same day, June 8, and the results were announced on August 8. The contamination levels were “below levels that would be of concern for human health,” Hanford employees were told this week in a memo obtained by KING.

That may not be comforting for the workers who test positive for “internal exposures” to radioactive plutonium. So far, at least 12 out of the first 65 test kits given to employees have come back positive, according to KING. The results of another 236 test kits have yet to be reported, but if nearly 20 percent of workers have already tested positive, more are bound to follow.

There are different forms of radiation, and none are worse than plutonium’s alpha radiation. Internal exposure to plutonium is not like exposure to radiation by air travel, microwaves or even X-rays.

Hanford officials are considering distributing more tests to other workers from other areas of the site, the Tri-City Herald reported. The state’s energy department is supposed to have the PRF torn down by the end of next month, but contractors have notified regulators that the deadline may not be met because work is paused while new procedures are established as a result of the June incident, according to the newspaper.

The Hanford Site’s plutonium was used in the “Fat Man” nuke that killed between 39,000 and 80,000 people in Nagasaki, Japan, on August 9, 1945. Hanford did not cease production of plutonium until the late 1980’s and has been a cleanup project for 28 years. The cleanup work is anticipated to last for at least 75 more years.

Contributed by Everett Numbers of theantimedia.org