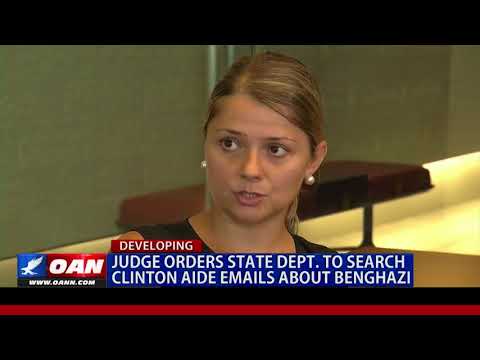 WASHINGTON (INTELLIHUB) — On Friday, a federal judge ordered a State Department search of email accounts belonging to Hillary Clinton’s closest advisers during her tenure at the State Department for any information pertaining to “Benghazi.”

The search was ordered after a judge agreed with details submitted in a Freedom of Information Act lawsuit filed by Judicial Watch aimed at exposing the former Madam Secretary’s mishandling of classified information which led to the Benghazi attack in 2012.

“This is a Freedom of Information Act case that we filed for all of Secretary Clinton’s emails related to the Benghazi attacks and from the onset the State department said that they are not going to search the official state.gov email accounts of her most senior aides who the State Department itself identified as individuals who worked closely with Secretary Clinton about Benghazi,” Judicial Watch attorney Ramona Cotca told One America News Network. “So it’s astonishing that that’s their position. We fought it in court this week and the judge agreed with us that the State Department needs to go back and search those email accounts.”

Cotca said that it’s been a long uphill battle trying to get the State Department to search the emails and said that they previously had “flat out refused to do it.” The attorney also pointed out how Hillary Clinton had “hand selected” and turned over only a small number of the 33,000 total emails in question and said that there is “no assurance provided by the State Department that that is a complete set of emails.”

According to Cotca, it should be a “simple” task to search the server for the records requested.