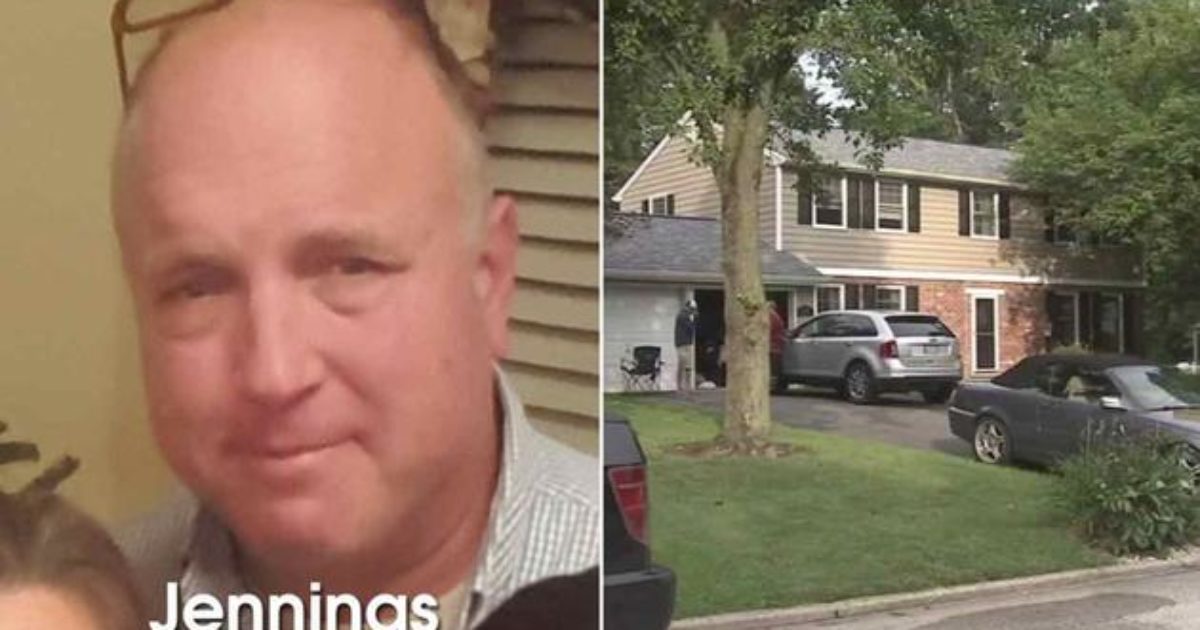 A Republican committeeman was executed by his rabid anti-Trump neighbor with two bullets to the head late Monday evening.

Clayton Carter, 51, shot his neighbor G. Brooks Jennings twice in the head, murdering him on Jennings property in front of his wife.

Shortly before 8 p.m. Monday, police responded to the 300 block of Box Elder Drive for a dispute between Carter and Jennings about cursing and video recording in the back yard. Police said they were able to resolve that dispute.

Then at approximately 1 a.m. Tuesday, police say the neighbors got into another dispute. Carter told police that Jennings shined a light into his eyes while he was outside. Carter then allegedly pulled a car onto his lawn, shining the high beams of the car on Jennings’ property.

Carter then allegedly retrieved a .380 semi-automatic handgun from his house and confronted the victim again outside.

Officials say Carter shot Jennings once in the head, knocking him to the ground. Carter then allegedly stood over Jennings’ body and shot him once more in the head.

Carter obviously became unhinged when he murdered his neighbor.

Philly.com gives a little more of the details:

Before Jennings was killed, West Goshen police had last interacted with Carter just before 8 p.m. Monday. Police were called to the block to resolve another dispute between Jennings and Carter, according to the complaint. Gleason said it was purely a verbal altercation; a news release from the District Attorney’s Office said the argument was related to “cursing and a video recording in the backyard.”

A few hours later, tensions escalated. Carter returned home from an errand at about 1 a.m. when he saw Jennings outside, according to the complaint. Carter grabbed his .380-caliber Ruger semi-automatic handgun from inside his home and went back outside to move his car.

He and Jennings began arguing about a spotlight issue; Carter later told police that Jennings was shining a light on him. Carter then drove his car onto the grass so it faced Jennings with the high beams on, according to the complaint.

Carter got out of his car and the argument continued. Carter shot Jennings, who collapsed. Carter then stood over Jennings, who lay motionless on his own driveway, and shot him once more in the head, according to the complaint.

He has a history of arguing with his neighbors and has peppered his lawn with anti-Trump signs, like this one.

However, Carter has claimed that Jennings attacked him with a knife, even though Carter sustained no injuries.

“My client says he was justified in doing so because he was under attack by a knife-wielding assailant,” said defense attorney Terrence Marlowe.

A knife and two bullet shell casing were found at the scene.

One shell was retrieved from Carter’s property while the other was discovered on Jennings’ property, near his body.

Clearly, Carter was not under attack by standing over a man and shooting him in the head.

Police say that Carter did not call police nor attempt to give medical aid to Jennings.

While neighbors had nice things to say about Jennings, they also said that Carter was a quarrelsome, argumentative man, and court records seem to prove that Carter did not play well with adults, having a history of disputes with multiple neighbors.

“You don’t want to sound cliche, you see this on TV all the time, but he is probably the nicest, best guy I’ve ever met in my whole life, really, seriously,” neighbor Brian Dougherty said of Jennings.

“We steered clear of him. We were frightened of him because he’s so unpredictable,” Kathy Pratt said of Carter.

“That guy is a menace to society,” Oliver said.

Philly.com reported, “In all, Oliver said, Carter’s long-running dispute with Jennings resulted in more than 70 calls to police in the last five years or so. West Goshen police said that estimate sounded high but they did not have the exact numbers on hand.”

Police say they did all they were able to do legally and that Carter was within his rights to carry his gun, something I agree with, and I wish Mr. Brooks had been carrying one as well.

“I think if something could have been done, we would have done it,” Gleason said. In the past, “we had allegations, but we never had proof.”

NBC10 reported that Jennings was a member of the Republican Committee of Chester County.

He joined the group in 2014 and was “very well respected,” Pennsylvania GOP Chair Val DiGiorgio told the news organization.

Clayton P. Carter was charged with first-degree murder and other charges on Tuesday.

He was arraigned and is being held without bail in Chester County jail.