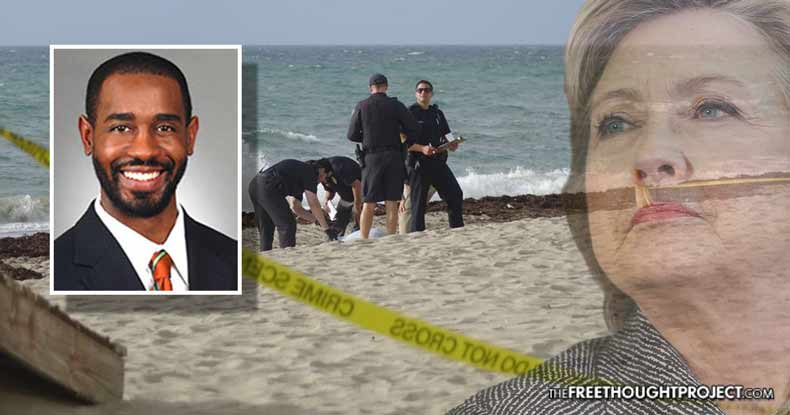 Possibly 2017’s biggest story is the lawsuit Bernie Sanders’ supporters have brought against the Democratic National Committee (DNC) alleging the DNC committed fraud when it favored Clinton over Sanders in the primaries.

Arguably, however, most Americans have never heard about the DNC voter fraud, mainly because the mainstream media is camped out on the alleged collusion between Trump’s campaign and Russia. Shrouded in mystery, one of the DNC lawsuit’s most jaw-dropping events occurred May 24, when the body of U.S. District Attorney Beranton J. Whisenant, Jr. was found on a Hollywood, Florida beach.

When his body was originally found, police announced they were investigating Whisenant’s death from a head wound as a homicide, but detectives and the medical examiner reported this week that the married father of three “had shot himself in the head,” according to The Sun Sentinel.

Jared Beck, husband of Elizabeth Beck (principal lawyers in the lawsuit and founders of JamPac, the group suing the DNC and Wasserman-Schultz), also made a bombshell admission in June, noting that he feared for his life due to the suspicious nature of all the deaths surrounding those working on exposing the DNC fraud. Whisenant was one to the people mentioned by Beck.

In a Facebook livestream, Beck issued the following statement:

After much consideration and deliberation, we have concluded that it is time to bring these concerns to the court’s attention. As such, today we filed a motion asking judge William Zloch to issue an order providing protection of the plaintiffs, their counsel and their families, as well as all potential witnesses in the DNC Fraud lawsuit. In support of this motion, we have cited the following events: the untimely death of our process server Shawn Lucas, the unsolved murder of DNC employee Seth Rich. We believe Mr. Rich might have been a potential witness in this case. We’ve also cited the recent untimely death of federal prosecutor Beranton Whisenant of South Florida. Also recent bizarre and disturbing conduct including threats that has been directed at plaintiffs their counsel and employees, and we’ve also cited an offer to provide security by the Oathkeepers and it’s president Stuart Rose.

Now, investigators have concluded their investigation into Whisenant’s death and they’ve ruled it a suicide. Whisenant’s body was found shortly before 6:30 pm on the 24th of May by a random stranger. At the time, police were trying to determine if his death was a suicide, homicide, or something else. All that has changed now with the department ruling Whisenant’s death a suicide, but in doing so, an even greater mystery has emerged. Police did not find a gun.

According to the Sun-Sentinel:

Beranton Whisenant, 38, was found dead by a beachgoer in Hollywood near Magnolia Terrace shortly before 6:30 a.m. on May 24. Detectives and a medical examiner foundwhisenant had shot himself in the head, hollywood police said. Police searched for two blocks north and south of the crime scene but couldn’t find the gun or any other weapon. He was assigned to the miami office of the U.S. Attorney’s office and been hired as a federal proseccutor a few months earlier

If Whisenant did kill himself, the firearm should be within reach of his body. There’s even enough steel in a polymer handgun to force the gun to be sunk in the sand. Nevertheless, no gun has been found, and Americans are simply supposed to accept the police department’s findings.

The fact no firearm was found will surely be fodder for conspiracy theorists who already believe Whisenant may have known too much and was assassinated for political reasons.

Whisenant worked in the major crimes division for the US Attorney’s Office in Miami investigating visa and passport fraud, reports the Associated Press, and his death came as a shock to colleagues.

As TFTP reported in July, the former director of the Economic and Social Assistance Fund (FAES), Klaus Eberwein, was declared deceased by the Miami Medical Examiner’s office from a bullet wound to the head. He was set to testify before a Haiti Senate Committee on the management of the PetroCaribe fund and to alleged misappropriation of international donor funds by the Clinton Foundation — the next day.

His untimely death was also declared a suicide.

Whisenant’s death would not be so suspicious if there weren’t so many other deaths involving people who were involved with exposing information on Clinton and the DNC.

As the Free Thought Project reported last month, a GOP operative and donor from the Chicago area, Peter W. Smith, who was investigating and working to obtain Hillary Clinton’s “missing” emails from Russian hackers allegedly killed himself in a Rochester, Minnesota hotel room only days after discussing his efforts with the Wall Street Journal, according to public records.

Smith allegedly put a plastic bag over his own head and filled it with helium gas until he died.

Records show that Smith’s death occurred at the Aspen Suites in Rochester, and they list the cause of death as “asphyxiation due to displacement of oxygen in confined space with helium.” Police allege that Smith used a plastic bag and a helium tank to kill himself.

Before Smith, however, other bodies were piling up who had dealings with the Clintons.

As the Gateway Pundit reports, On July 3, 2016, Shawn Lucas and filmmaker Ricardo Villaba served the DNC Services Corp. and Chairperson Debbie Wasserman Schultz at DNC’s headquarters in Washington, D.C., in the fraud class action suit against the Democrat Party on behalf of Bernie Sanders supporters.

Days later he was found dead. Details of how he died have yet to be made public.

Former U.N. President John Ashe is another one of the bodies to “conveniently” perish just before a high profile court date tied to the Clintons.

After Ashe was found dead, the U.N. claimed that he had died of a heart attack, according to the New York Post’s Page Six. Suspiciously, however, that claim was later disputed by local police officers in Dobbs Ferry, New York, who noted that Ashe had crushed his own throat while working out.

While there is no explicit evidence linking the untimely deaths of all these individuals together, the fact that they were all tied to the Clintons and the DNC should not be ignored. To think that people who wage wars–in which thousands of innocent civilians are slaughtered–would be above taking out a handful of people who could expose their crimes is naive at best.