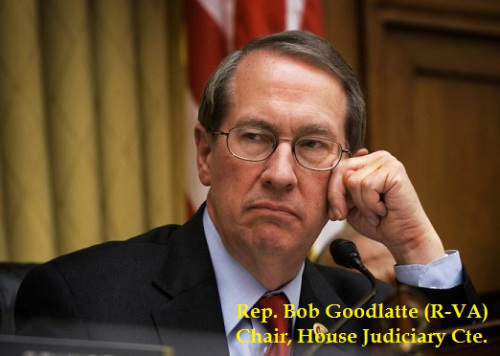 House Republicans are doing their utmost to bring Hillary Clinton to justice.

On July 26, 2017, Republicans on the House Judiciary Committee ingeniously turned a Democrat witchhunt (HRes. 446) of President Trump’s firing of FBI director James Comey inside out into an amended HRes. 446 calling for an investigation into Comey’s mishandling of the FBI’s criminal investigation into then-Secretary of State Hillary Clinton’s use of an unauthorized private email server. (See “House Republicans are going after Hillary Clinton!”)

A day later, on July 27, Rep. Bob Goodlatte and other Republicans on the House Judiciary Committee redoubled their effort by sending a letter to Attorney General Jeff Sessions and Deputy Attorney General Rod Rosenstein calling for the appointment of a second special counsel to investigate matters connected to the 2016 election which are not addressed by HRes. 446 or Special Prosecutor Robert Mueller, including many actions taken by Obama Administration officials like former Secretary of State Hillary Clinton, Attorney General Loretta Lynch, and FBI Director James Comey.

Below is the full text of the letter:

We are writing to you to request assistance in restoring public confidence in our nation’s justice system and its investigators, specifically the Department of Justice (DOJ) and the Federal Bureau of Investigation (FBI). We need to enable these agencies to perform their necessary and important law enforcement and intelligence functions fully unhindered by politics. While we presume that the FBI’s investigation into Russian influence has been subsumed into Special Counsel Robert Mueller’s investigation, we are not confident that other matters related to the 2016 election and aftermath are similarly under investigation by Special Counsel Mueller. The unbalanced, uncertain, and seemingly unlimited focus of the special counsel’s investigation has led many of our constituents to see a dual standard of justice that benefits only the powerful and politically well-connected. For this reason, we call on you to appoint a second special counsel to investigate a plethora of matters connected to the 2016 election and its aftermath, including actions taken by previously public figures like Attorney General Loretta Lynch, FBI Director James Comey, and former Secretary of State Hillary Clinton.

Many Democrats and members of the Washington media previously called for a “special prosecutor” to investigate Russian influence on the election and connections with the Trump campaign. Not surprisingly, once you actually made the decision to appoint a special counsel, the calls for further investigations by congressional committees continued, focused on allegations that have heretofore produced no evidence of criminality, despite the fact that over a year has passed since the opening of the original FBI investigation. Political gamesmanship continues to saturate anything and everything associated with reactions to President Trump’s executive decisions, and reveals the hypocrisy of those who refuse to allow the Special Counsel’s investigation to proceed without undue political influence. It is an unfortunate state of affairs.

Your stated rationale for recommending Director Comey’s termination as FBI Director was his mishandling of former Secretary Clinton’s email investigation and associated public disclosures concerning the investigation’s findings. We believe this was the correct decision. It is clear that Director Comey contributed to the politicization of the FBI’s investigations by issuing his public statement, nominating himself as judge and jury, rather than permitting career DOJ prosecutors to make the final decision. But many other questions remain unanswered, due to Mr. Comey’s premature and inappropriate decision, as well as the Obama Justice Department’s refusal to respond to legitimate Congressional oversight. Last week, the Republican Members of this Committee sent a letter to the Justice Department, asking for responses to those unanswered inquiries. These questions cannot, for history’s sake and for the preservation of an impartial system of justice, be allowed to die on the vine.

It is therefore incumbent on this Committee, in our oversight capacity, to ensure that the agencies we oversee are above reproach and that the Justice Department, in particular, remains immune to accusations of politicization. Many Congressional entities have been engaged in oversight of Russian influence on the election, but a comprehensive investigation into the 2016 Presidential campaign and its aftermath must, similarly, be free of even the suggestion of political interference. The very core of our justice system demands as much. A second, newly-appointed special counsel will not be encumbered by these considerations, and will provide real value to the American people in offering an independent perspective on these extremely sensitive matters.

Our call for a special counsel is not made lightly. We have no interest in engendering more bad feelings and less confidence in the process or governmental institutions by the American people. Rather, our call is made on their behalf. It is meant to determine whether the criminal prosecution of any individual is warranted based on the solemn obligation to follow the facts wherever they lead and applying the law to those facts.

As we referenced above, Democrats and the mainstream media called for a special counsel to be appointed to investigate any Russian influence on President Trump’s campaign. Their pleas were answered, but there are many questions that may be outside the scope of Special Counsel Mueller’s investigation. This was clear following Mr. Comey’s recent testimony to the Senate Intelligence Committee on June 8, 2017, which ignited renewed scrutiny of former Attorney General Loretta Lynch, and the actions she took to mislead the public concerning the investigation into the Clinton email investigation. Last year, this Committee inquired repeatedly about the circumstances surrounding that and other matters, but our inquiries were largely ignored.

At one point, the attorney general had directed me not to call it an investigation, but instead to call it a matter, which confused me and concerned me. That was one of the bricks in the load that led me to conclude, ‘I have to step away from the department if we’re to close this case credibly.’

In addition, in preparing to testify in front of Congress for a September 2015 hearing, Mr. Comey asked Ms. Lynch at the time whether she was prepared to refer to the Clinton investigation as just that, an “investigation.” Mr. Comey testified that Ms. Lynch said, “Yes, but don’t call it that, call it a matter.” Mr. Comey retorted, “Why would I do that?” Ms. Lynch answered, “Just call it a matter.” Mr. Comey stated that he acquiesced, but it gave him “a queasy feeling,” since it gave him the “impression that the attorney general was trying to align how we describe our work” with how the Clinton campaign was talking about it.

Following Director Comey’s Senate Intelligence Committee testimony, Senator Dianne Feinstein was asked about the testimony while appearing on CNN’s “State of the Union.” Senator Feinstein stated, “I would have a queasy feeling too, though, to be candid with you, I think we need to know more about that, and there’s only one way to know about it, and that’s to have the Judiciary Committee take a look at that.”

We share Senator Feinstein’s and Mr. Comey’s concerns – specifically, that during the midst of a contentious Presidential election, which was already rife with scandal arising from Secretary Clinton’s mishandling of classified information, that our nation’s chief law enforcement officer would instruct the FBI Director, her subordinate, to mislead the American public about the nature of the investigation. Following Ms. Lynch’s directive to downplay the Clinton investigation as a “matter,” Director Comey infamously terminated the Clinton investigation, stating, “[a]lthough there is evidence of potential violations of the statutes regarding the handling of classified information, our judgment is that no reasonable prosecutor would bring such a case.”

Mr. Comey’s testimony has provided new evidence that Ms. Lynch may have used her position of authority to undermine the Clinton investigation. At any other point in history this accusation would entail a shock to the conscience of law abiding Americans who expect a DOJ free of political influence. We only have, however, an investigation into Russian influence on the 2016 election, including any ties to the Trump campaign. To limit our nation’s insight into just this this single component of the 2016 election will only cause the special counsel’s work to be derided as one-sided and incomplete. The special counsel’s work must begin and end unimpeded by political motivations on either side of the aisle. For these reasons, the following points must also be fully investigated – ideally, via a second special counsel. This is imperative to regain the cherished trust and confidence in our undoubtedly distressed law enforcement and political institutions.

We call on a newly appointed special counsel to investigate, consistent with appropriate regulations, the following questions, many of which were previously posed by this Committee and remain unanswered:

You have the ability now to right the ship for the American people so these investigations may proceed independently and impartially. The American public has a right to know the facts – all of them – surrounding the election and its aftermath. We urge you to appoint a second special counsel to ensure these troubling, unanswered questions are not relegated to the dustbin of history.

Note¹: Uranium One is a uranium mining company, headquartered in Toronto, Canada. It has operations in Australia, Canada, Kazakhstan, South Africa and the United States. In January 2013, Russian state-owned enterprise Rosatom, through its subsidiary ARMZ Uranium Holding, purchased Uranium One for $1.3 billion. For Bill Clinton and John Podesta’s involvement in Uranium One and Rosatom, click here.

Note²: Fusion GPS is a commercial DC-based intelligence firm that conducts opposition political research on political candidates, such as on Mitt Romney. The company was hired by Planned Parenthood (PP) to investigate pro-life activists who took a series of “sting” videos showing PP selling aborted baby parts to medical researchers. In the 2016 presidential campaign, Fusion GPS was first hired by Republicans to conduct “opposition research” on Donald Trump, which ended when Trump became the GOP’s presidential nominee. Hillary Clinton then became Fusion GPS’s client to dig up dirt on Trump. Fusion GPS hired former MI-6 agent Christopher Steele to compile a dossier on Trump, which became infamous for its entirely-fake allegation that Trump had hired Russian prostitutes to urinate (“golden shower”) on a Russian hotel bed supposedly used by Obama.

Send a “thank you” to Congressman Bob Goodlatte!: