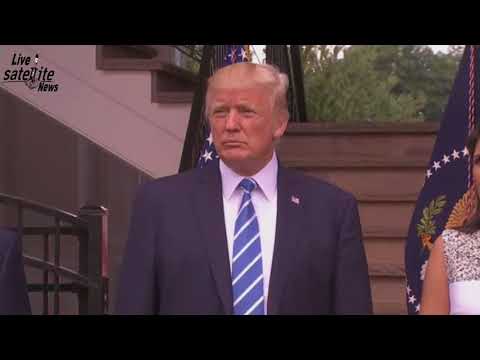 There has been much debate about whether or not North Korea possesses not only nuclear weapons, but the capabilities to fit them onto an ICBM that can accurately hit targets in Japan, Guam or the United States.

While we’ve repeatedly warned that North Korea does have such technology, including a “Super EMP” weapon capable of disabling the U.S. power grid if detonated directly over the Central United States, at this point, none of that may even matter because a war of words and egos is already taking place between North Korean leader Kim Jong Un and President Donald Trump. Each verbal exchange, whether via Twitter or NK’s state-sponsored media, appears to further escalate tensions. This week the President warned the rogue leader that any overt threat from the Communist nation would be met with a military response.

And if you have any doubt as to President Donald Trump’s current mindset, this should clear things up.

Reporter: Are we going to go to war? Trump: I think you know the answer to that.

According to Mediaite, Trump made the comments at a press briefing in New Jersey:

A reporter asked what he can tell Americans who are “on edge” about the heightened rhetoric between the U.S. and North Korea.

“Hopefully it will all work out, okay?” Trump responded. “Nobody loves a peaceful solution better than President Trump, that I can tell you.”

He went on to say that he thinks  “lots of good things could happen” but “we could also have a bad solution.”

Another reporter asked him if “bad solutions” means going to war, to which he said, “I think you know the answer to that.”