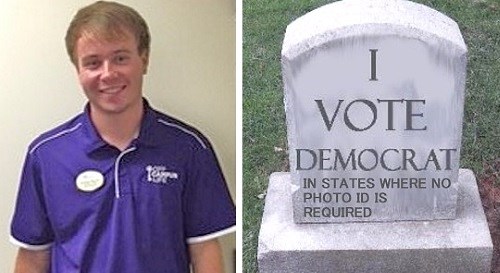 Its governor is a Democrat and rabid Clinton supporter, Terry McAuliffe.

Victor Skinner reports for EAGNews.org that on Aug. 8, 2017, a James Madison University student, Andrew Spieles, 21, received a 100-day prison sentence in federal court, after he pleaded guilty to registering dead voters for the Democratic Party during the 2016 election.

While working for the Democratic campaign during the voter registration drive, Spieles falsified at least 18 Virginia Voter Registration Forms that were submitted to the registrar’s office in Harrisonburg last August, WSET reports.

According to the Department of Justice’s news release:

“On August 15, 2016, an employee of the Registrar’s Office contacted law enforcement after another employee in the office recognized a registration form submitted in the name of the deceased father of a Rockingham County Judge. The Registrar’s Office discovered multiple instances of similarly falsified forms when it reviewed additional registrations. Some were in the names of deceased individuals while others bore incorrect middle names, birth dates, and social security numbers.”

Spieles admitted that he prepared the false voter registration forms by obtaining the name, age, and address of individuals from ‘walk sheets’ provided to him by the Virginia Democratic Party, and by fabricating social security numbers and a birth date based on the ages listed in the walk sheet.

Spieles told investigators that he alone was responsible for the fake voter registrations and that his antics were designed to help his co-worker reach a registration “quota,” The Richmond Times-Dispatch reported in June.

“Spieles, whose grandfather had died earlier that year, said he had no idea that three of the names he used on those forms were for people who had died. Choking back tears, he said he would have felt ‘hurt and angry’ if his family had received a letter about registering to vote addressed to his grandfather, and he wanted to apologize to the families.

He also apologized to the court and said he wanted to find a way to transform this situation into a way he can help people.”

Although Spieles’ voter fraud is punishable by up to a year in prison and a $100,000 fine, he reached a plea agreement with Assistant U.S. Attorney Jeb Terrien that reduced his sentence to between 100 and 120 days behind bars. A judge then waived the fine because Spieles couldn’t afford it and sentenced him to 100 days in prison.

The Times-Dispatch claims that “There is no indication any fraudulent votes were cast in November’s election as a result of the improper registrations.” How the newspaper knows that is not explained.

A James Madison University spokesman told The College Fix that Spieles already had graduated from the school before his misdemeanor conviction.