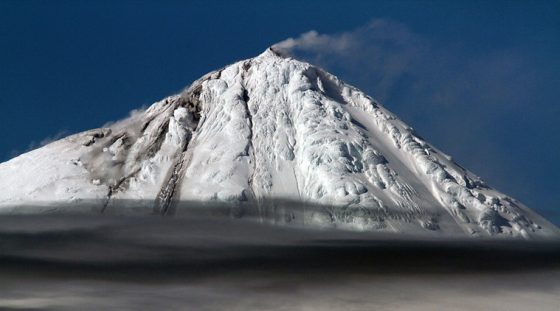 In addition to the 47 volcanoes already known about currently “sleeping” under the Arctic ice, scientists have found more.  They discovered 91 additional volcanoes in Antartica, now the largest volcanic region on earth.  This is a big blow to those who think melting polar ice is the sole fault of humans.

The project, by Edinburgh University researchers, has revealed almost 100 volcanoes. The highest discovered volcano is as tall as the Eiger, a popular peak to traverse in the Swiss Alps, which stands at almost 4,000 meters (over 13,000 ft) in Switzerland.  Before this discovery,  the densest concentration of volcanoes in the world was that of east Africa’s volcanic ridge. Geologists say this huge region in Antartica is likely to dwarf that of Africa.

You won’t read about this in the mainstream media. Because volcanic eruptions may not reach the surface in Antartica, but they definitly melt the ice from beneath and drastically destabilize the entire region.  No amount of carbon tax or global warming initiative would stop a volcano from melting polar ice, but that likely won’t stop alarmists from blaming volcanic activity on global warming.

A quick glance at the map below put out by Plate Climatology shows that the melting glacial ice is indeed caused by volcanic activity under the Arctic ice and not global warming or human induced climate change, as most would like us to believe. 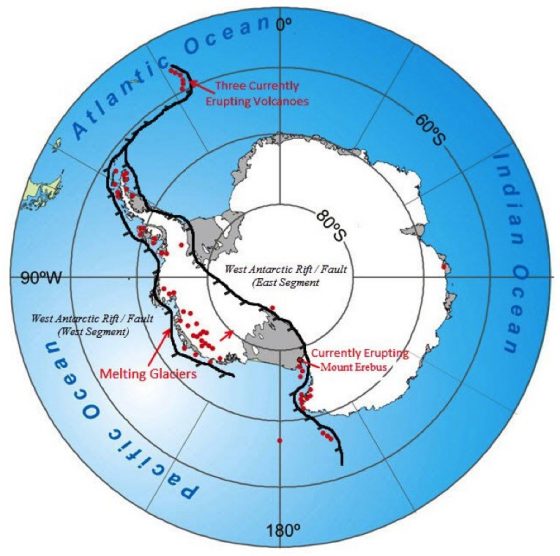 The activity of this range could have worrying consequences, [scientists] have warned. “If one of these volcanoes were to erupt it could further destabilize west Antarctica’s ice sheets,” said glacier expert Robert Bingham, one of the paper’s authors. “Anything that causes the melting of ice – which an eruption certainly would – is likely to speed up the flow of ice into the sea. “The big question is: how active are these volcanoes? That is something we need to determine as quickly as possible.” –The Guardian

The Edinburgh volcano survey reported in the Geological Society’s special publications series. They said the research involved studying the underside of the West Antarctica ice sheet.  The researchers were looking for hidden peaks of basalt rock similar to those produced by the region’s other volcanoes. Their tips actually lie above the ice and have been spotted by polar explorers over the past century. To find out how many of these “hidden peaks” lie below the ice, the study analyzed measurements made by previous surveys, which involved the use of ice-penetrating radar, carried either by planes or land vehicles, to survey strips of the West Antarctic ice.

The results were then compared with satellite and database records and geological information from other aerial surveys. “Essentially, we were looking for evidence of volcanic cones sticking up into the ice,” Bingham said. After doing all the research and comparing data, scientists came up with an additional 91 volcanoes, all of which are currently covered in ice which sometimes lies in layers that are more than 4km (almost 2 and a half miles) thick in the region.  All of which are in the region where Arctic ice is melting too. These active peaks are concentrated in a region known as the West Antarctic rift system, which stretches 3,500km (about 2175 miles)  from Antarctica’s Ross ice shelf to the Antarctic peninsula.

“We were amazed,” Bingham said. “We had not expected to find anything like that number. We have almost trebled the number of volcanoes known to exist in west Antarctica. We also suspect there are even more on the bed of the sea that lies under the Ross ice shelf, so that I think it is very likely this region will turn out to be the densest region of volcanoes in the world, greater even than east Africa, where mounts Nyiragongo, Kilimanjaro, Longonot and all the other active volcanoes are concentrated.”

Scientists claim that there could be huge implications for life on earth if one of these massive volcanoes decided to go off, melting enormous amounts of Arctic ice. The biggest implication is perhaps how bad this news is for governments around the globe raking in billions of dollars to combat climate change.  Without humans being the cause of the ice melt, who would the governments tax?  It’s hard to tax a volcano…