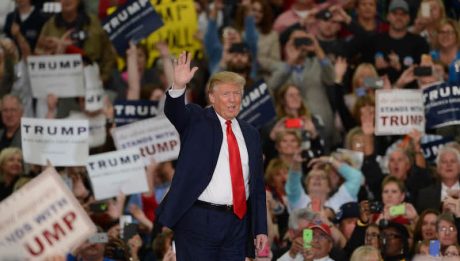 Do you stand with President Trump? If so, I would like to ask you to support #TeamTrump candidates for Congress all over the nation. I am running on a pro-Trump platform in Idaho’s first congressional district, and so far I have created an enormous amount of buzz all over the state. But in order to win, I have to get my message out to hundreds of thousands of potential voters that are not familiar with my work, and that is going to take a lot of time, effort, energy and resources. It is humbling to be in a position where I am forced to rely on others, and I am learning how to reach out and ask for help. If you would like to contribute to the campaign, you can do so right here. Every single dollar makes a tremendous difference, and no donation is too small.

Fortunately, other #TeamTrump candidates are also starting to gain momentum across the country. Omar Navaro and Paul Nehlen are just two examples. If every Trump voter in the country donated at least one dollar to the campaign of a pro-Trump candidate for Congress today, all of us could have our campaigns completely funded by tomorrow. I recently learned that Americans spend 80 billion dollars a year on lottery tickets. It is so sad that people are literally flushing tens of billions of dollars down the toilet when they could be doing something constructive with it. Would you be willing to donate at least one dollar to my campaign? I personally see every single donation that comes into my campaign, and every single one encourages me so greatly.

Right now, many Democrats are having absolutely no problems raising money. If the Democrats win control of the Senate and the House in 2018, they are going to impeach President Trump, and their donors smell blood in the water.

And an effort may be made to impeach President Trump anyway if the composition of Congress stays about the same that it is right now. Many establishment Republicans would jump at the chance to stab Trump in the back, and that is why it is absolutely imperative that we get Trump a lot of friends in Congress in 2018.

Whoever wins the Republican primary here in Idaho’s first congressional district next May is going to win the general election the following November. There is no incumbent running for this seat, and I have a feeling that my primary opposition may come from a RINO in the state legislature that is rumored to be entering the race shortly. If this particular RINO ends up winning, he will be no friend of Trump.

But if I am elected, I will do whatever I can to stop the investigations into Trump and his family. It is abundantly clear that these investigations are simply witch hunts, and I will fight as hard as I can against the efforts of the Deep State to remove Trump from office.

The fate of the Trump presidency is going to hang in the balance in the mid-term elections, and many of these congressional elections are going to be decided by who raises the most money. If I can get my message out to every voter in this district, I will win, because I am much more conservative than anyone else in the race.

If you would like to help me win this race, there are several ways that you can do that…

Donate – Your donations are literally the fuel that moves our campaign forward. Since this is a completely wide open race with no incumbent, I have a very clear path to victory, but that will only happen if all of you stand with me. You have no idea how blessed I am by each contribution, and if you would like to join the effort you can do so right here.

Join The Email List – The email list on our official campaign website is how we will be keeping everyone informed about the campaign. So if you want to be part of what we are doing, please go to MichaelSnyderForCongress.com and subscribe to the email list.

Blast Campaign Materials Out To Your Email List – Perhaps you may not have much money to donate to the campaign right now, but when you forward articles such as this one out to your email contacts that multiplies the impact that we have. Some of you have hundreds of email contacts, and some of you have thousands, and it would be a tremendous help if you would share what we are trying to do with all of them.

Twitter Hashtags #MAGA And #TeamTrump – Would you be willing to post a message to Twitter each day with the hashtags #MAGA and #TeamTrump? Of course MAGA means “make America great again”, and the #TeamTrump hashtag is being used by pro-Trump campaigns all over the nation.

Sign Locations – If you live in the first congressional district here in Idaho, we are looking for locations on private property to put up signs. Ideally, we are looking for locations along roads that are heavily traveled. If you know of such a location that would be available for us, please go to MichaelSnyderForCongress.com and send me a message.

Facebook – I get a great deal of engagement on my personal Facebook profile, but we are also trying to increase engagement on our official Facebook campaign page. If you would be willing to visit the page regularly and like and share our material that would be an exceedingly great help to us.

Special Promotions – Thanks to those that supported our efforts on HelpMichaelWin.com, we have been able to print up much needed brochures and signs. We are hoping to have another special promotion ready to roll for my next interview on the Alex Jones Show on Tuesday.

Since the campaign launched on July 4th, God has been opening up door after door, and amazing things have been happening. The path to victory is very clear, but I also know that I could never do this alone. No matter how much time, effort and energy I put into this, this campaign will not succeed without the help of hundreds of volunteers and thousands of donors.

If you are wondering if I need your help, the answer is yes. You can donate to the campaign right here, and I would also like to ask you to prayerfully consider getting directly involved in the campaign in other ways as well.

My hope was that this campaign would bring together family, friends and fellow believers to work toward a common goal, and it has been such a thrill to see that actually happen. I want to thank everyone that has stepped forward to help us so far, and I can’t wait to see what happens next…