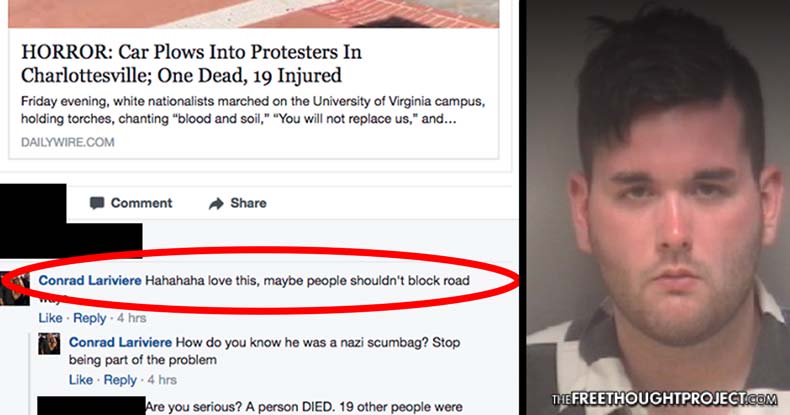 While many Americans were horrified as they watched coverage of the violent scene that unfolded in Charlottesville, Virginia, on Saturday, a police officer in Massachusetts cheered on the car that plowed through a crowd, leaving one dead and 19 injured.

Lariviere then added another comment that said “How do you know he was a Nazi scumbag? Stop being part of the problem.”

Other individuals reacted to Lariviere’s callous rhetoric with comments such as “Are you serious? A person DIED. 19 other people were injured, some badly. You ‘love’ this?” and “How many times has a car plowed into you, Conrad?” and “You are an idiot.”

Lariviere responded by writing, “Actually ******* I’ve been hit by ashitbag with warrants but who cares right you ignorant brat live in fantasy land with the rest of America while I deal with the real danger.”

Springfield Police Commissioner John Barbieri confirmed that there is a patrolman employed by the department named Conrad Lariviere, and said that he is investigating the Facebook comments to confirm the user’s identity before pursing disciplinary action.

“I received notification of this Facebook post earlier today via email from a complainant. The post is purportedly from Springfield police officer. I took immediate steps to initiate a prompt and thorough internal investigation,” Barbieri told MassLive in an email. “If in fact this post did originate from an officer employed with the Springfield Police Department, this matter will be reviewed by the Community Police Hearings Board for further action.”

“I just got done issuing a statement this morning on how upsetting the tragic incidents were in Charlottesville, VA, and one of our own officers does this? Unbelievable!” Sarno said. “There is no place for this in our society, let alone from a Springfield Police Officer.”

After his comment went viral and he began to realize the repercussions, Lariviere showed a very different side, and he told MassLive that his comment was just meant to be “a stupid comment about people blocking streets.”

“Never would I want someone to get murdered. I am not a racist and don’t believe in what any of those protesters are doing,” Lariviere said. “I’m a good man who made a stupid comment and would just like to be left alone.”

However, it should be noted that even though Lariviere said he would not want to see anyone murdered, his original comments were on an article that already confirmed one person had died as a result of the same actions he was encouraging.

Heather Heyer, a 32-year-old paralegal from Charlottesville, was killed in the crash. Her mother, Susan Bro, told the Huffington Post that her daughter’s mission was “about stopping hatred.”

Conrad Lariviere’s cringeworthily comment cheering on a car that purposefully rammed into a crowd should cause outrage, and it should also serve as a reminder that if he had been in uniform, and on the scene on Saturday, he would have fit in perfectly.

In fact, as The Free Thought Project reported, officers in Charlottesville were ordered to stand down as violence erupted, and one police source was quoted as saying, “We’ll not intervene until given command to do so.”