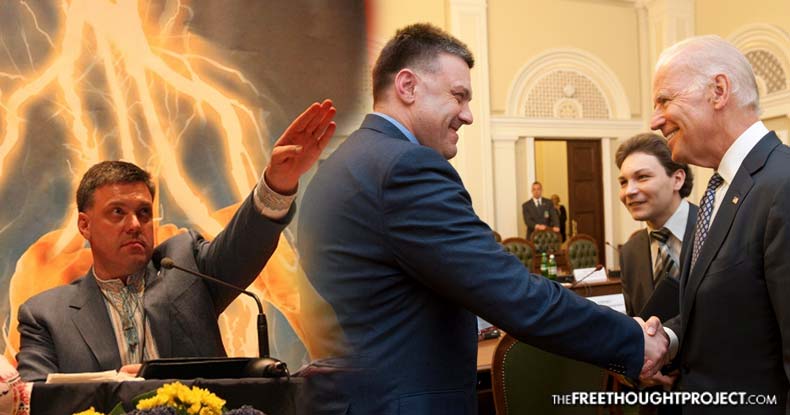 In 2014, the Obama Administration stood with Ukrainian Neo-Nazis against the encroaching presence of Russian troops and sympathizers alike. The Ukrainian resistance to Russian pressure now looks eerily similar to the Neo-Nazi groups stirring up trouble in Charlottesville, VA over the weekend. And according to the New York Times, the Neo-Nazis in Ukraine have been supplying nuclear rocket motors to North Korea.

Julian Assange took notice as well and tweeted two pictures, one of the Ukrainian Neo-Nazi marchers on the Left, and one of the Charlottesville neo-nazis on the right, both carrying tiki-torches that look like they could have easily been the exact same people.

The new face of America is eerily familiar. pic.twitter.com/xpAcHo7gHH

Here’s a tweet of former Vice President Joe Biden of the Obama administration shaking hands with one of Ukraine’s Neo-Nazis. Oleh Yaroslavovych Tyahnybok is a Ukrainian politician and former member of the Verkhovna Rada and also a leader of the nationalist far-right Svoboda political party.

Because we have proof the FBI, ATF and other governmental entities have infiltrated such U.S.-based groups in the past, there’s plenty of reason to suspect those Virginia groups are also being led about by the nose by shadowy figures within the U.S. government.

For those who think the suggestion the U.S. would ever stand with or support Neo-Nazis, the Huffington Post in 2014, delved deep into the subject and found some very disturbing discoveries. The HP wrote the Ukranian government was infiltrated by Neo-Nazis:

For starters, Andriy Parubiy, the new secretary of Ukraine’s security council, was a co-founder of the Neo-Nazi Social-National Party of Ukraine (SNPU), otherwise known as Svoboda. And his deputy, Dmytro Yarosh, is the leader of a party called the Right Sector which, according to historian Timothy Stanley, “flies the old flag of the Ukrainian Nazi collaborators at its rallies.”

The rise of U.S. backed Neo-Nazis did not go unnoticed then, and isn’t going unnoticed now. But questions remain as to who is funding the U.S. based Neo-Nazis. No longer confined to the fringes and shadows of American society, four individuals had their racist coming out party so to speak over the weekend.

As the New York Times reported, three figures stepped out of the darkness to make their case against the supposed removal of civil war era statues and stand up for the so-called “Right”. That is the smoke and mirrors argument they used to protest.

Matthew Heimbach, founder of the Nationalist Front, Charlottesville native and organizer Jason Kessler, and David Duke, the former Louisiana politician and former leader of the Ku Klux Klan, all were present and marching under the banner of “Unite the Right” a supposed movement to save the Robert E. Lee statue slated for removal from a city park.

But if the same financial and political backers behind Ukraine’s groups, are the same ones behind this past weekend’s mayhem, all fingers of blame may be pointed at the U.S. government’s black operations. All of which raises the most pragmatic question of “Why?”

The ugly truth is, whether we want to admit it or not, both the Neo-Nazi groups and those Antifa and Black Lives Matter groups which stood against them may be getting their funding from the same people, causing a planned clash of ideologies which resulted in further dividing the American people.

James Alex Fields Jr. caused the clash to turn deadly when he rammed his Dodge into a crowd of protesters, killing one counter-protester. Kessler quickly disavowed himself from any knowledge of who Fields and any role he may have played within the far-right group. Who is Fields? What is his military background, if he has one? On Monday CBS Radio News drew comparisons between Fields and Timothy McVeigh, the Oklahoma City federal building bomber (1995) who was also a member of the Army.

Years after the bombing, a letter written by McVeigh was discovered. McVeigh wrote his family just before the bombing and revealed he was a member of a U.S. government funded black ops team, quite a departure from the official narrative and the media’s stereotyping of him as a crazed anti-government lone wolf.

Also on Monday, The New York Times linked the Neo-Nazi led government of Ukraine to North Korea’s advances in ballistic missile technology. The Times concluded the motors being used in North Korea’s missiles have come directly from the Ukraine. The NYT wrote:

North Korea’s success in testing an intercontinental ballistic missile that appears able to reach the United States was made possible by black-market purchases of powerful rocket engines probably from a Ukrainian factory with historical ties to Russia’s missile program, according to an expert analysis being published Monday and classified assessments by American intelligence agencies

The thought that the U.S. government would be in bed with Neo-Nazi extremist groups to promote its own foreign interests both abroad and at home may seem like a notion to which a tinfoil hat wearing conspiracy theorist might ascribe. But the proof is in the pudding.

The U.S. partnered with them in the Ukraine, now leading to the ability of the U.S. to wage war against North Korea, using their advances in ballistic missile technology as the principal motivation to invade. And they may now be using them at home as a way to remove the last vestiges of freedom of speech both online and in the public square.

It is also important to remember, as TFTP reported, police were ordered not to respond to the violence which was taking place in Charlottesville.

While the left calls for Trump’s head over his disgusting refusal to denounce the neo-nazis in Charlottesville, it is also important to remember they stayed entirely silent as Obama and Biden placed an entire country under the control of people from the same ilk.