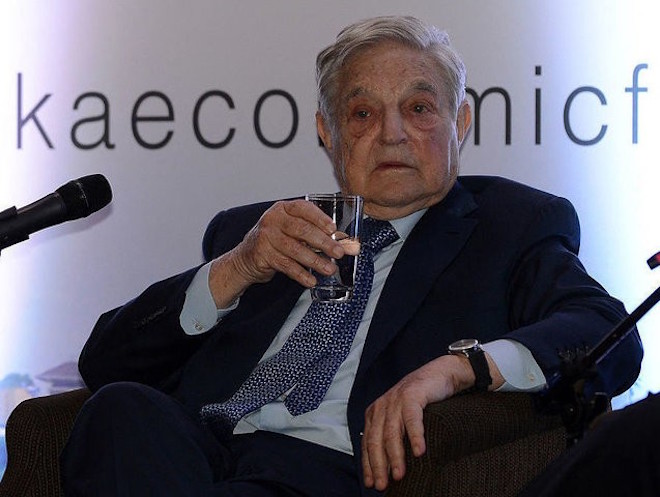 George Soros, the billionaire, “philanthropist” globalist who has been instrumental in taking down entire countries and economies is stepping up his efforts to influence the US Congress.

According to Soros funded Open Society Policy Center, in the first half of 2017, it paid out more money to lobbyists in DC to sway US politics than it did for the entire year of 2016!

The Open Society Policy Center reported spending $4.6 million in the first and second quarters, which runs from Jan. 1 to June 30, according its disclosure forms filed to the House of Representatives and the Senate. The group has three in-house lobbyists who lobby the U.S. Senate, House of Representatives, National Security Council, the Department of Defense, and the Department of State.

The policy center reported spending $19,120,000 on lobbying for policy and legislative efforts with Congress and government agencies between 2002 and 2012, which averages out to $1.9 million per year.

The amount Soros spent on lobbying shot up to $11 million in 2013, a drastic increase from the $3.4 million the group had spent in 2012. The uptick could be attributed to the group’s push for “comprehensive immigration reform” during this time.

Now the group’s lobbying expenditures are trending upwards again. The center is on pace to spend $9.2 million this year. …

The amount the group has spent over the last four and a half years on its lobbying efforts ($41.6 million) is more than double what they had spent during the ten-year period from 2002 to 2012 ($19.1 million)

Soros’ lobbyists targeted just 3 issues from January to March and 17 different issues, including the Bill on Foreign Funded Organizations in Hungary (LexNGo), Hungary’s crack down on foreign-funded organizations in the country, from April to June, according to the Free Beacon.

In April, we reported on the fact that Hungary’s Prime Minister Viktor Orbán delivered a scathing indictment of the world’s liberals and arguing that Hungary had the right to implement whatever immigration policies it chooses to, and that the nation also had the right to fight back against the underhanded efforts of Soros and his minions.

“I know that the power, size and weight of Hungary is much smaller than that of the financial speculator, George Soros, who is now attacking Hungary,” said Orbán.

“Despite ruining the lives of millions of European with his financial speculations, being penalized in Hungary for speculations, and who is an openly admitted enemy of the euro, he is so highly praised that he is received by the EU’s top leaders,” he added.

Orbán continued by noting that Soros was behind much of the mayhem in the continuous flood of illegal migrants into Europe, and that the billionaire was personally financing the efforts in an attempt to strip EU member nations of their sovereignty.

“George Soros and his NGOs want to transport one million migrants to the EU per year,” Orbán said.

“He has personally, publicly announced this program and provides a financial loan for it,” he added. “You could read this yourselves.”

“We reject this, we do not want to lose the right of national ratemaking for public utilities, because we fear that this would increase the burdens of the people and once again lead to drastic price increases, from which Hungarian families have suffered enough,” the Hungarian Prime Minister concluded.

In July, I reported on Alexander Soros, the son of George, and how he has continued to give tens of thousands of dollars to the Democratic National Committee and various Democrats, according to Federal Election Commission records.

As managing partner of Soros Brothers investments, Alexander Soros, gave $33, 900 to the DNC.

Again, from the Free Beacon:

The $33,900 donation from Alexander Soros to the DNC, the maximum amount that can be given to a national party in a calendar year, was made on April 28, records show. Alex also provided a $2,700 contribution to Friends of Maria, the campaign committee of Democratic Sen. Maria Cantwell (Wash.), and $1,000 to Ossoff for Congress, the campaign committee of failed Georgia Democratic candidate John Ossoff this year.

Alex has outpaced his father in political giving to Democratic campaign committees so far this cycle. George Soros provided a $2,700 donation to Sen. Cantwell’s campaign and a $1,000 contribution to John Ossoff, filings show.

The Senate Majority PAC, the political action committee of now-retired Democratic Sen. Harry Reid (Nev.), was the biggest beneficiary of contributions from Alex, who gave $3.5 million to the PAC between August and November 2016.