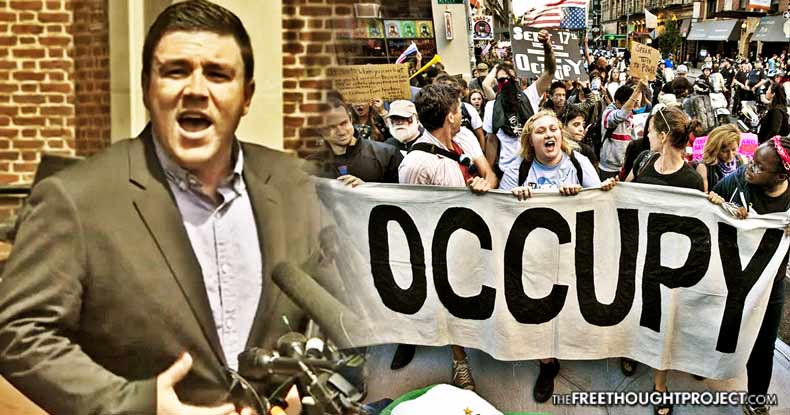 A troll is a troll is a troll. As the Free Thought Project has been pointing out recently, there is a deliberate divide being pushed in America right now and its effects are as violent as they are powerful. According to recent revelations backed up by a report out of the Southern Poverty Law Center, at least one of those helping to organize and push this divide is a self-proclaimed professional provocateur who allegedly supported Obama and the Occupy movement before doing an about face to white nationalism.

The organizer of the massively Pro-Trump ‘Unite the Right’ march on Saturday in Charlottesville, Jason Kessler reportedly happened to also be an Obama supporter in the days of Occupy — and as recently as 2016. According to an archived post from his blog, he also has no problem openly bragging about being a professional provocateur.

According to the Southern Poverty Law Center:

Rumors abound on white nationalist forums that Kessler’s ideological pedigree before 2016 was less than pure and seem to point to involvement in the Occupy movement and past support for President Obama.

At one recent speech in favor of Charlottesville’s status as a sanctuary city, Kessler live-streamed himself as an attendee questioned him and apologized for an undisclosed spat during Kessler’s apparent involvement with Occupy. Kessler appeared visibly perturbed by the woman’s presence and reminders of their past association.

Kessler himself has placed his “red-pilling” around December of 2013 when a PR executive was publicly excoriated for a tasteless Twitter joke about AIDS in Africa.

Regarding the incident, Kessler stated “… so it was just a little race joke, nothing that big of a deal, she didn’t have that many followers, she probably didn’t think anybody was gonna see it,”

Regardless of Kessler’s past politics, the rightward shift in his views was first put on display in November, 2016 when his tirade against Wes Bellamy began.

The Free Thought Project spoke with the person behind the website Altrightexposed.com who shared some particularly damning statements from Kessler, which are archived.

Kessler said that “large scale attacks” are “somewhat of a blessing in disguise”:

“We get so caught up in the emotion of the violence that we don’t consider the long-term, historical consequences. To put it bluntly: the planet is overpopulated already. Maybe we shouldn’t try to cure every disease, we shouldn’t confiscate all the harmful drugs, etc. Perhaps we’d be happier if we made peace with the fact that rabid animals are going to dwindle the herd from time to time (as they have in much greater volume throughout history) & that’s not really a bad thing in the long run. Should we try to stop as many large scale attacks as possible? Of course… but I don’t think the zeitgeist should have an aneurysm every time one occurs either. I think we be served to draw some historical perspective on how difficult the human condition has always been & how that is something of a blessing in disguise.”

Adding fuel to the suspicion surrounding Kessler’s role as a professional provocateur, when the alleged former Occupier turned Alt-Righter attempted to hold a press conference on Sunday, he was shouted down by leftists. Of course, nothing is suspicious about that — except for the fact that police then surrounded him as if he was the president and escorted him away to safety.

Given the fact that cops allowed the white supremacists clash with Antifa all day on Saturday — without stopping any of it — Kessler’s special treatment certainly raises an eyebrow.

Protesters chased Jason Kessler away from his own press conference in Charlottesville. Here's my view: pic.twitter.com/fTXctHgzsi Even more suspicious is that Lee Stranahan, a former reporter for the HuffPo, Daily Kos, and Breitbart, has pointed out the Neo-Nazi connections between the Obama administration and the Ukraine which could tie all this together.

As the Free Thought Project pointed out yesterday, the Ukrainian neo-Nazis were largely funded by the United States government. With the support of Hillary Clinton, John McCain, Joe Biden, et al the US helped to overthrow their legitimately elected government and installed a US-backed neo-Nazi regime.

As TFTP noted, a detailed academic investigation by Ivan Katchanovski reveals that these events were actually a false flag operation, which was planned and operationalized with the intent of overthrowing the Yanukovych government by an alliance of ultra-nationalist organizations, such as Right Sector and Svoboda, and oligarchic parties, specifically Fatherland.

Those who are paying attention are fully aware of the United States government’s propensity to overthrow democratically elected leaders and install brutal dictators in nation states that refuse to cave to their policy.

Given their track record abroad, it would not be surprising if the shadow government — who has already toppled governments and left death and destruction in their wake — employ these same tactics domestically to bring about a new level of police state control.

Although Kessler has tried to purge his blog of any writings that might prove embarrassing to his new found friends in the “alt-right”, a trip to the Internet Wayback Machine at archive.org is quite revealing.

A list of quotes is compiled at the link below: (WITH SOURCES AND LINKS)