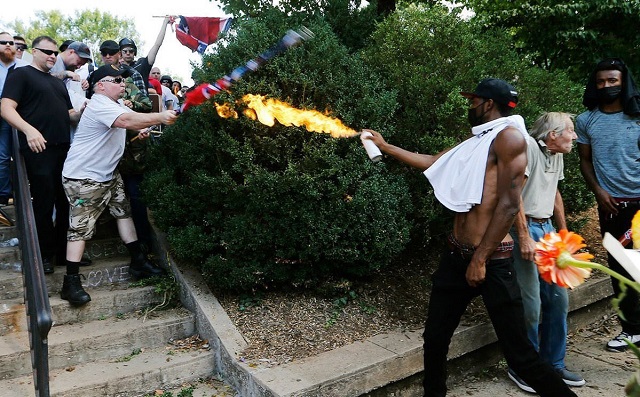 During an epic press conference on Tuesday, President Donald Trump told the truth about the alt-left violence in Charlottesville which the media refused to cover.

While the media has refused to cover it and has spun the narrative the violence was one sided, the truth is both sides came prepared for war and the reason violence broke out is because police stood down and actually actively corralled the alt-right protesters into the alt-left antifa and Black Lives Matter activists.

The mayor of Charlottesville is a far-left activists who said he wanted the city to be “the capitol of the Resistance.” Just like the riots at UC Berkeley, police allowed the right-wingers to be attacked and did nothing to stop the violence until after the rally was shut down.

This video of Unite the Right organizer Jason Kessler’s press conference is as clear-cut as it gets. A man is seen walking up and punching him to stop his press conference and police do nothing. They let the press conference be shut down and Kessler be attacked, then provide him with mild protection afterwards. They then chose not arrest any of his assailants despite their committing crimes on video directly in front of them.

Unite the Right rally organizer Jason Kessler was chased away by protesters during a press conference in Charlottesville pic.twitter.com/5HOnoc0yal

This video from the beginning of the rally shows how the right-wing rally-goers were marched straight into a mob of antifa by police in riot gear so they could be pepper-sprayed by alt-left fanatics.

It must be underlined, this is how the rally began. It began with alt-left radicals pepper-spraying the right-wingers in the face.

YouTuber and Twitterer Baked Alaska was maced in the face almost immediately upon entering the rally. As you can see in the video, the alt-right rally-goers who had a permit had to literally break through a line of alt-left antifa to get to the rally grounds and were sprayed heavily with mace. He was told he may have permanent eye damage.

Here’s another video showing how police literally corralled the alt-right into the alt-left to provoke conflict:

The Hill reporter Taylor Lorenz was punched in the face by an alt-left criminal while filming the aftermath of the suspected car attack. Watch as a Reporter for The Hill gets attacked by AntiFa in Charlottesville! pic.twitter.com/Bq0XRuXZ5y

An Infowars reporter was maced by an alt-left goon just for filming:

Here’s other videos showing how it was a war-zone which was sanctioned by the mayor and police:

As Trump said during his epic press conference, the media is not reporting on this violence because they’re totally “dishonest.” Even Fox News and the conservative media were too cowardly to report on this.

Now that the President himself has highlighted it, perhaps the truth will finally get out. Share these videos with everyone you know because the lying media sure as hell is not going to show them, they’re too busy “literally shaking” and “crying” because Trump had the audacity to tell the truth.