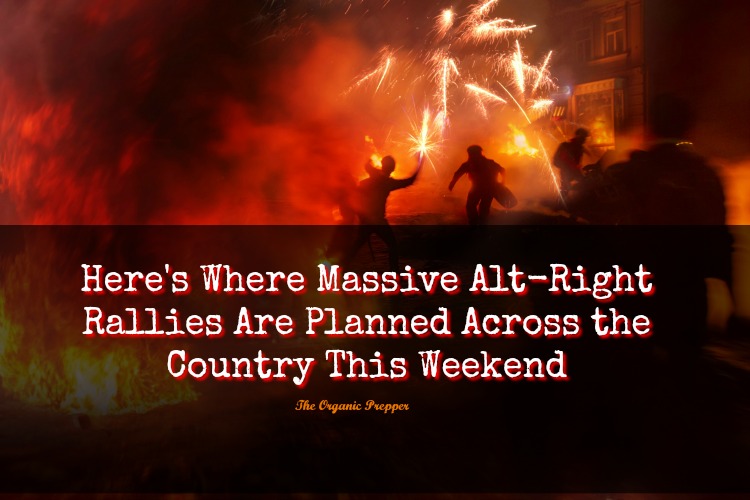 (Updated) Just in case the horrifying events in Charlottesville, Virginia this past weekend weren’t enough of a warning about the dangers of political extremism, it looks like we’re gearing up for an idealogic civil war across the country, complete with violence and death. This weekend, massive Alt-Right rallies are scheduled across the nation and we can be guaranteed they’ll be met with counter-rallies.

I said then that violence and vandalism in the name of political dissent was wrong. I stand by the same opinion now.

This weekend, more Alt-Right rallies are scheduled across the nation.

Zero Hedge reports that some of the rallies have been postponed, including the one in Mountain View, CA, according to organizers.

As the Mercury News reports, the “Peaceful March on Google” has been postponed “due to credible Alt Left terrorist threats for the safety of our citizen participants,” the group wrote in a blog post. The group is protesting against the recent termination of engineer James Damore over a memo claiming which slammed the search giant for its “anti-conservative” bias and claimed a biological basis for the gender gap in tech.

Despite our clear and straightforward statements denouncing bigotry and hatred, CNN and other mainstream media made malicious and false statements that our peaceful march was being organized by Nazi sympathizers. Following the articles, credible threats from known Alt Left terrorist groups have been reported to and relevant authorities have been notified.

In one instance, an Alt Left threat was made to use an automobile to drive into our peaceful march. (source)

If the official event is cancelled, does that mean people will stay home? Let’s hope that cool heads prevail.

Here’s where the rallies will be held.

After the rage was stoked last weekend, it’s doesn’t take a crystal ball to predict that things will get ugly.

The first of the batch will be protesting Google’s firing of James Damore for his criticism of their diversity policy. The March on Google is to protest “anti-white-male diversity policies.” These will be held in:

The organizers of these events are trying to distance themselves from the event in Charlottesville.

“We, the organizers of the March on Google, join the President in condemning the actions in Charlottesville on August 12th. Despite many false rumors from those seeking to discredit us we are in no way associated with any group who organized there.” (source)

But, reading the tweets of people planning to attend, it seems that the potential attendees share similar philosophies with the people in Charlottesville. This means, regardless of the intentions of the organizers, things are likely to get ugly.

These may not be the only upcoming events.

According to CNN, two other events will be upcoming:

Not only these events will occur, but there is talk of widespread removal of civil war monuments, renaming of streets and buildings, and other incendiary actions that will almost certainly result in further rage.

Another rally is being planned for September 16 in Richmond, Virginia, around a monument to Confederate General Robert E. Lee to protest the removal of similar statues from public spaces in Civil War–era Southern states. White supremacist Richard Spencer is also seeking permission to speak next month at the University of Florida. (source)

Counterprotests are being planned in response to the rally in Boston as well, with the Black Lives Matter civil rights group saying they will march against the alt-right. (source)

Another event is planned “sooner rather than later” in Lexington, Kentucky to oppose the removal of Civil War statues. All of these events have the potential to be tinder boxes.

All of these events have the potential to be tinder boxes.

If you think these Alt-Right rallies will be “peaceful” you are delusional.

Just like in Charlottesville, there will be counter-protestors, and it would be naive to expect that these events will occur without violence.

Incidentally, has anyone else wondered whether both of these groups are being funded and encouraged equally in order to destabilize the country? After all, the biggest culprits in Charlottesville were not Virginians. They were from out of state. Someone needs to ask how this is happening.

We have reached a point in our country of pure action-reaction. I personally find both extremes to be equally despicable, but they are an extraordinarily vocal minority. These are all hate groups and I’d like to think our country is better than to let those people speak for us.

Be prepared to stay away from these gatherings.

Events like this can turn into riots very quickly, and in that instance, you’re going to want to get home and stay home until it’s over. Make sure you are prepared for this possibility.

Here is a general list of supplies to have on hand. Remember that sometimes power supplies are lost during situations like this. Occasionally officials do this to gain more control over the populace and sometimes it happens as a side-effect of the wholesale destruction by the rioters. Keep the potential for a down-grid situation in mind when preparing.

This article goes into more detail about preparing for a civil unrest event.

The most important thing is to stay home and avoid the areas where violence is more likely to occur.

This is a vocal minority. This is not the heart of America.

Despite these rallies, riots, and protests, I still believe that most people are inherently good. Out of the population of our country, only a minuscule percentage is attending rallies in riot gear hoping to hurt “the other side.” Most of us get along just fine with people of different races or who have different political or religious beliefs. We don’t believe that everyone has to see the world through our lens.

But somehow, these extremists have become louder than us. Somehow, they are representing who Americans are to the rest of the world.

Whether you’re talking about Alt-Right rallies, Black Lives Matter marches, Neo-Nazi gatherings, or Antifa protests, they aren’t about unity. They’re about division. Us vs. Them. Same protests, different t-shirts.

This could lead to civil war across our country. Not since the 1800s have we been so utterly divided.

This can go nowhere good.