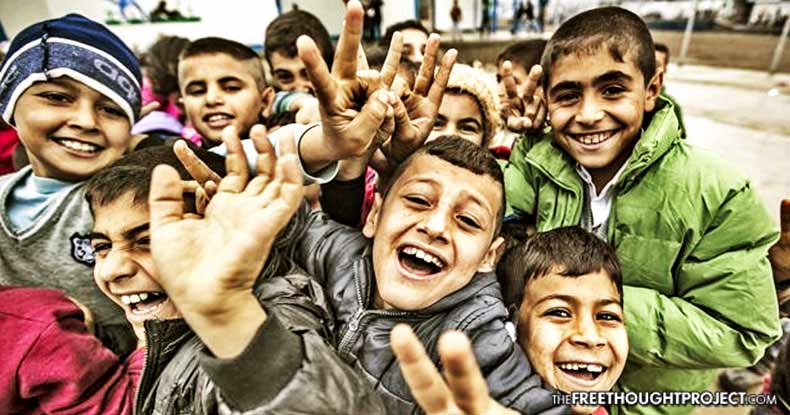 The Trump administration’s decision to halt the covert CIA program of arming ‘moderate rebels’ in Syria was lambasted in the mainstream press, but for those paying attention, this was an intelligent move — namely, because those ‘moderate rebels’ are actually terrorists.

On Friday, the International Organization for Migration (IOM) said that nearly 603,000 Syrian refugees displaced by the war began to return to their cities and villages in the first seven months of this year.

Ironically, the number of Syrian refugees returning home nearly matched the 685,662 people who returned during the whole of 2016, according to IOM spokesperson Olivia Headon.

According to a report by Al Jazeera:

The returning Syrians were motivated by the desire to protect their homes and possessions; an improved economic and security situation in their areas of origin; as well as problems with integration in their host countries, according to the IOM.

About 67 percent of the returns this year have been to Syria’s Aleppo province, where the opposition-held eastern part of the city was retaken by President Bashar al-Assad’s government in December, the IOM said.

And while Trump’s decision to stop a covert CIA program to funnel weapons to groups that record themselves beheading children should be praised by the media, it was instead labeled as a pro-Russian move by the mass media propagandists.

In reality, much of the opposition forces fighting against the Syrian government are aligned with al-Qaeda and ISIS factions. Thus, the move to stop the flow of arms to terrorist affiliates should have been applauded as part of the larger struggle against Islamic extremism.

In fact, this move by Trump was actually proposed in legislation by Congresswoman Tulsi Gabbard in the House and Senator Rand Paul in the Senate.

“For years, our government has been providing both direct and indirect support to these armed militant groups, who are working directly with or under the command of terrorist groups like Al-Qaeda and ISIS, all in their effort and fight to overthrow the Syrian government,” Gabbard said earlier this year.

As the Free Thought Project reported in April, the US knew al-Qaeda leader al-Zawahiri called on Muslims in Turkey and the Middle East to aid the rebels in the Free Syrian Army. From this day forward, the lines between who Al-Qaeda or the ‘rebels’ actually were — became heavily blurred. But, according to a State Department email, the United States did not care as they knew Al-Qaeda was on their side.

UNCLASSIFIED U.S. Department of State Case No. F-2014-20439 Doc No. C05789138 Date: 10/30/2015 AL-ZAWAHIRI URGES MUSLIM SUPPORT FOR OPPOSITION (U) Al-Qaida leader al-Zawahiri called on Muslims in Turkey and the Middle East to aid rebel forces in their fight against supporters of Syrian President Asad in an interne video recording. Al-Zawahiri also urged the Syrian people not to rely on the AL, Turkey, or the United States for assistance.

Once this wire went out to multiple departments in the form of an Ops Alert, apparently there was originally some concern about Al-Qaeda joining the ranks of the US-supported rebels — who are being used by the American Deep State to destabilize Syria on behalf of special interests.

600,000 Syrians run back to the evil brutal dictator who bombs and gasses civilians for no reason.
OR, you've been lied to about Syria. https://t.co/KpIYPpjZ1d

Tellingly, in a reply to then Secretary of State Hillary Clinton, Jake Sullivan let her know that Al-Qaeda “is on our side in Syria.” 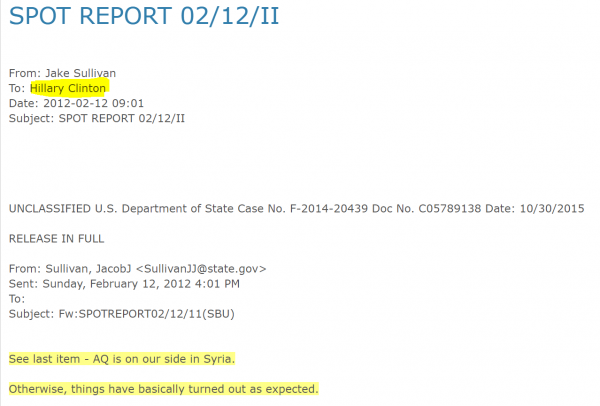 Without question, the covert CIA program precipitated the rise of the “moderate rebel” factions that led to the massive refugee crisis seen in Syria. Syrians who remain internally displaced number at about 800,000, many of whom have fled violence and strife for the second or third time, according to the IOM. An estimated 808,661 people have been newly displaced this year, “many for the second or third time,” Headon said.

According to journalist Vanessa Beeley, reporting from Syria:

The estimated 6.4 million IDPs in Syria have almost invariably, fled to Syrian government controlled areas for refuge from the US Coalition extremist factions who have driven them from their hometowns and villages across Syria.

This area had historically been Druze and Christian populated. Now it has been crowded with Syrians from all walks of life, backgrounds and regions. All spoke to me of their hardship under the US Coalition armed & funded extremist & terrorist factions. Many had been driven from their homes by the armed mercenary forces, suffering hideous wounds in the process.

The mass of returning Syrian refugees was largely due to military losses by ISIS and al-Qaeda affiliates after Syrian government forces recently removed the terrorist forces from their last stronghold in the central province of Homs, recapturing the strategically important town of al-Sukhna after the group took hold of it in May 2015.

Syria’s civil war, now in its seventh year, has devastated the country, claimed hundreds of thousands of lives and displaced about half of the pre-war population of 22 million, according to Al Jazeera.

When analyzing the massive refugee crisis precipitated by the Syrian conflict, it becomes clear that U.S. moves in support of terrorists in Syria have little to do with the welfare of the Syrian people, and everything to do with a regime change operation intent on installing a US-backed puppet government.