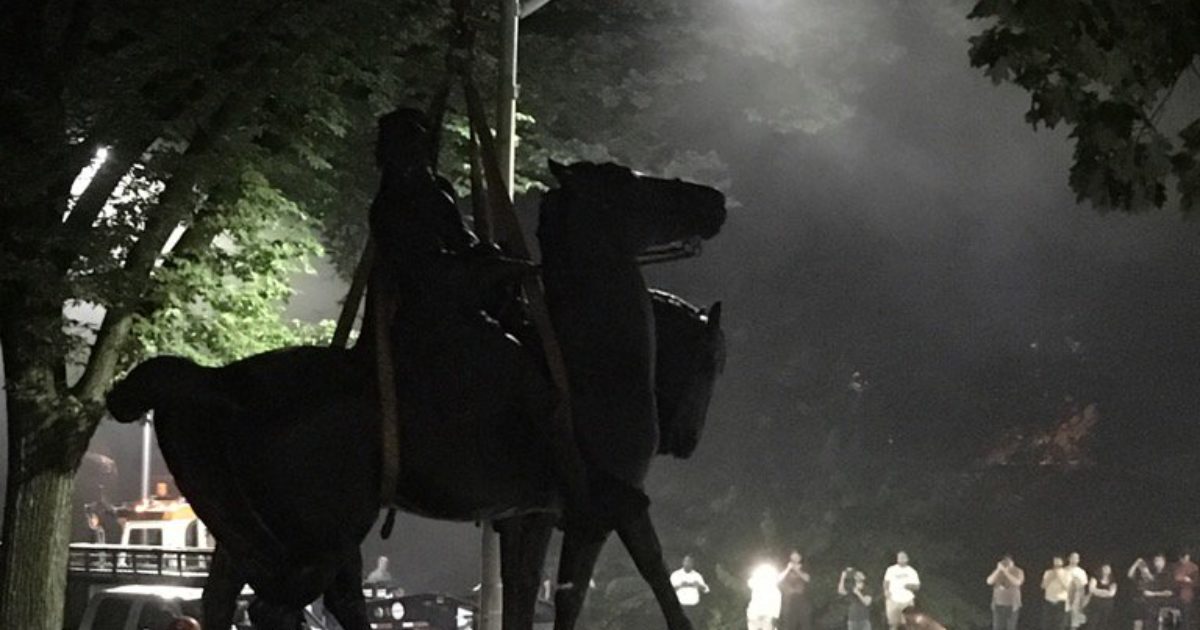 Overnight the city of Baltimore removed every vestige of the Confederacy from their streets in the ongoing effort to placate leftist agitators.

On Monday night the Baltimore City Council voted to “destroy” all of the Confederate monuments in their city.

On Tuesday night Baltimore’s mayor Catherine Pugh directed city crews to do the work of removing the monuments.

Among the most famous of the statues removed was the monument to Robert E. Lee and Thomas “Stonewall” Jackson which had stood in the Wyman Park Dell since 1948.

Baltimore has begun removing Confederate statues in the wake of the violence in Charlottesville this past weekend https://t.co/PZFmVNCXsd pic.twitter.com/Vd9NOYtKRA

For those just waking up, here's what happened in Baltimore: the city's dead-of-night removal of all four of its Confederate monuments. pic.twitter.com/gaquP2hlqN

This isn’t the first city to sweep away important symbols of their past, as Dennis Michael Lynch explains:

Across the country, cities like New Orleans and Louisville have been removing or relocating monuments, but the events in Charlottesville are causing some city councils to hasten their plans.

Based on the events in Virginia, the mayor of Lexington, Kentucky, announced on Saturday that he is expediting his city’s plans to remove Confederate statues from public locations in the city.

In June, workers dismantled a Confederate memorial in St. Louis, Missouri. The monument’s removal began the same day an agreement was reached between the city and several groups that sued to have the monument stay in place, according to reports.

On Wednesday morning the most famous cemetery in Hollywood, California also announced that it would be removing their memorial to the Confederate soldiers buried in their soil.

The removal comes after vandalism, threats against the cemetery, and requests from activist groups have simultaneously converged to force the cemetery’s hand.

Since 1925, the 6-foot monument has stood in the Confederate section of the cemetery, where more than 30 Confederate veterans, along with their families, are buried. The monument will be taken to a storage site within the next 24 hours, cemetery officials said, but the grave markers will remain.

This week, Hollywood Forever was fielding as many as 60 calls and emails a day from people requesting the cemetery get rid of the monument, said Tyler Cassity, the cemetery’s president and co-owner. A Change.org petition calling for its removal drew more than 1,300 signatures.

On Tuesday, someone vandalized the granite boulder monument, Cassity said, using a black marker to write “No” across its bronze plaque.

But Atlanta, Georgia may well be where the greatest disservice to our nation’s history is done as city leaders contemplate destroying the largest high relief piece of art in the world. Stone Mountain’s Confederate Memorial Carving is even larger than the carvings at Mount Rushmore, and the beautiful work is among the most famous piece of public art in America.

Atlanta’s Democrats and other leftist leaders have been discussing the idea of destroying the Stone Mountain monument for the last few years, ever since this anti-history movement began trending on the left. However, this is the first time that a possible mainstream candidate has offered their support of the memorial’s destruction.

One of the gubernatorial candidates is calling for the removal of Confederate statues and monuments from around the state, including Stone Mountain’s Civil War carving.

The Democratic party front-runner for governor, Stacy Abrams, said the carving of three Confederate leaders at Stone Mountain, which is designated by state law as an official Confederate memorial site, should be removed.

“It is 2017, and now is the time for us to have a conversation about removing the last vestiges of that type of hatred and that type of vitriol toward minority communities in Georgia,” Abrams told Channel 2’s Richard Elliot.

Paid for by founders of the 2nd KKK, the monument had no purpose other than celebration of racism, terror & division when carved in 1915. /2

We must never celebrate those who defended slavery and tried to destroy the Union. /3

These memorials, these monuments are not a “celebration” of the Confederacy or of slavery. They are a memorial to the deadliest war and most dangerous moment in our nation’s history. They are a reminder of what happens when political divisions tear a rift between our people, and they call us to avoid conflict and seek a peaceful resolution to our differences. Many of these monuments also serve as a reminder of the nearly 700,000 people who died because of the war…

Today’s leftists only see these statues through one lens – modern racial strife – but these memorials are not one-dimensional and to view them as such is to marginalize our history, our culture, and all we’ve accomplished.

Especially when we consider that there is a statue of Vladimir Lenin standing proudly and safely on the streets of Seattle, Washington. Just in case you ignored your history classes in High School, Lenin led the Bolsheviks through the Russian Civil War, where more than 2.5 million people lost their lives. The Bolsheviks ended up winning the war and eventually, over the next 75 years or so, they ended up slaughtering tens of millions of people, conquering dozens of smaller nations, enslaving the masses, sending political dissidents to slave labor camps, and leading the planet to the brink of nuclear war.

But hey, who cares about facts?