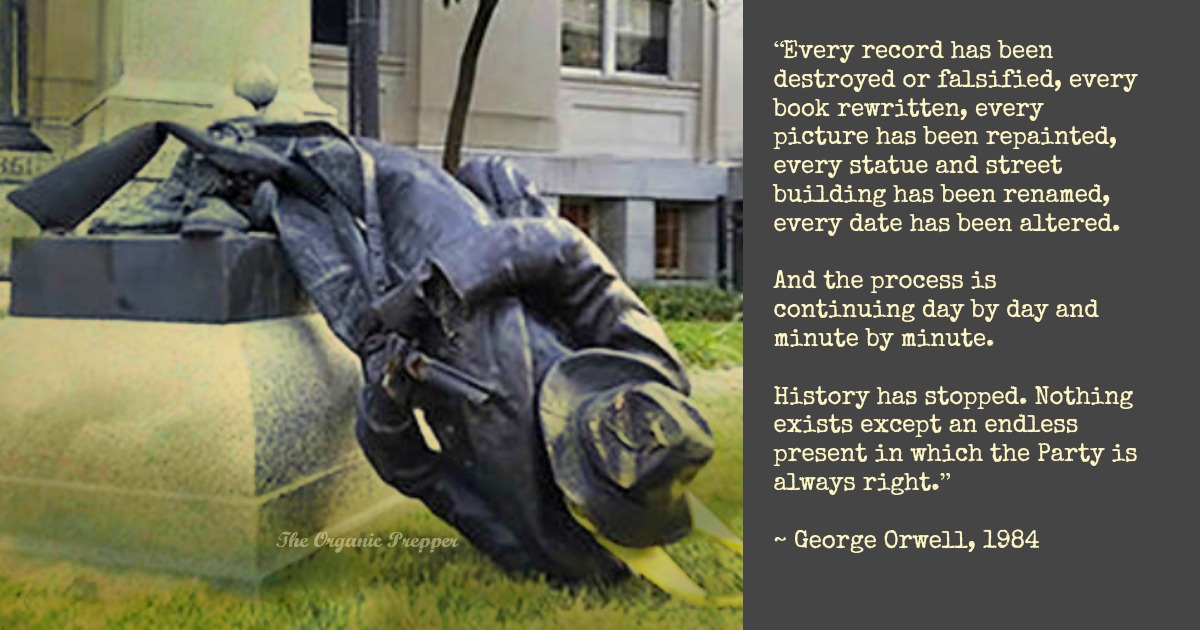 Removing monuments from the Civil War to erase history is a mistake.

This won’t be a popular opinion, and I’m okay with that. Because for now, we still have freedom of speech.

While I can understand why some people would strongly disagree, I’d like to respectfully offer a different perspective. My opinion that those monuments should be left alone isn’t because I support the horrible things that have been done in our history. It’s exactly the opposite.

Every country’s history has a dark spot in it. More than one, if we’re being honest. But the fact that we aren’t still mired in those dark places means that we have made strides toward becoming better. Erasing history, though, is a dangerous path because it means that the truth becomes something malleable that has been created instead of recorded.

Rewriting history is positively Orwellian, and a terribly dangerous path.

After President Trump won the election, his opponents began snapping up copies of 1984 so quickly that Amazon sold out of the classic. At that point, I was hopeful that it meant people would find some common ground.

Amazon has sold out of copies of George Orwell’s authoritarian classic, 1984, and they won’t have more until Feb. 2nd. The book was the number one bestseller on Tuesday and Wednesday. The publishing company, Penguin, is rushing more copies to print.

Alas, my hope was short lived.

All sorts of breathless articles were penned, comparing President Trump to Big Brother. (This one, for example.) But then, something else happened. And it isn’t good.

1984 has become an instruction manual.

Despite the initial furor, now it seems like these folks have decided to instead use 1984 as a how-to manual. As you watch people destroying monuments of Southern Civil War generals, renaming streets, and planning to deface the side of a mountain with their faces on it, let this chilling quote ring in your ears.

“Every record has been destroyed or falsified, every book rewritten, every picture has been repainted, every statue and street building has been renamed, every date has been altered. And the process is continuing day by day and minute by minute. History has stopped. Nothing exists except an endless present in which the Party is always right.” (George Orwell, 1984)

Without our history, good or bad, who are we? If we don’t remember where we came from, how can we hope to continuously improve? If we can’t learn from the mistakes of the past, and if the truth is “created” by the vocal minority, then how does the truth even exist anymore?

We’ve all heard that quote, “Those who do not learn history are doomed to repeat it.” So what happens when we completely erase it?

When my daughter and I took a road trip to explore American history last year, we stopped and visited many of these historic markers that are now pending demolition. We discussed the hypocrisy of a man who was responsible for resounding words of freedom in the US Constitution keeping hundreds of slaves. Her curiosity was piqued by the old homesteads. Her heart was saddened by walking into old slave quarters and seeing the shocking difference of their cramped quarters to the huge mansions beside them. Nothing you can read about in a book could possibly compare to walking through those doors and seeing the real thing.

We looked up information about General Lee and General Jackson. We learned of the famous battles where thousands of Americans from the North and the South died. When in California, we visited Manzanar, the site of an internment camp for Americans of Japanese heritage. She learned so much about our country’s ugly past and about how our ideals as a nation were changed for the better.

We also spent a lot of time at various civil rights monuments, in particular, the Harriet Tubman Museum and the Underground Railroad Byway. (My daughter has been fascinated by Tubman since she read her biography in third grade.) After seeing the old plantations and the slave quarters, Tubman’s heroism was suddenly writ large. Would her heroic acts have made so great an impression if my daughter hadn’t learned the backstory? Heroism doesn’t exist in a vacuum.

Erasing the negative part of history doesn’t make it go away Sanitizing the facts doesn’t mean that they never happened. It just means no one can learn from them.

Our very language is being rewritten.

Everything has now become so politically correct that most of us have no idea what to say in certain situations, lest we be chastised as horrible bigots. The schools are systematically brainwashing children and the indoctrination is completed in our colleges and universities.

“Power is in tearing human minds to pieces and putting them together again in new shapes of your own choosing.” (George Orwell, 1984)

By manipulating language, opinions are manipulated, as is a sense of right and wrong.

“Don’t you see that the whole aim of Newspeak is to narrow the range of thought? In the end we shall make thoughtcrime literally impossible, because there will be no words in which to express it. Every concept that can ever be needed will be expressed by exactly one word, with its meaning rigidly defined and all its subsidiary meanings rubbed out and forgotten.

By 2050, earlier, probably – all real knowledge of Oldspeak will have disappeared. The whole literature of the past will have been destroyed. Chaucer, Shakespeare, Milton, Byron – they’ll exist only in Newspeak versions, not merely changed into something different, but actually changed into something contradictory of what they used to be. Even the literature of the Party will change. Even the slogans will change. How could you have a slogan like ‘freedom is slavery’ when the concept of freedom has been abolished? The whole climate of thought will be different. In fact there will be no thought, as we understand it now. Orthodoxy means not thinking – not needing to think. Orthodoxy is unconsciousness.” (George Orwell, 1984)

How can anyone not see this is happening right before our very eyes.

It isn’t Donald Trump who is bringing in an Orwellian future. It’s the rabid politically-correct thought police.

Where will it end?

It isn’t likely to end with the removal of icons related to the Civil War. Ajamu Baraka, the Green Party’s vice-presidential candidate in 2016 suggests that all memories of Trump, Washington, and Jefferson should also be erased.

If you want to remove symbols of white supremacy why are you limiting it to confederacy? Yes Trump, Jefferson & Washington must be next.

Good, bad, and ugly, this is part of our national story. Tearing down everything that was related to the sordid parts doesn’t mean that they never happened.

I strongly denounce these groups who are filled with hatred for their fellow Americans.

While I believe these historic monuments should not be destroyed, I certainly could never align myself with the neo-Nazis, the KKK, and the Alt-Right people who are protecting them, because they’re doing so out of hatred and a misplaced sense of glory. Nor would I ever align myself with the Antifa, the most ironic group ever in existence that proclaims to be against fascism but noisily and brutally stifles the First Amendment rights of those with whom they disagree.

These groups all represent what is worst about our country. Violence, vandalism, hatred, and terror are wrong, no matter who is perpetrating those acts.

In any argument, it’s always the loudest people who get heard, but that doesn’t mean they speak for everyone. We must be careful not to over-generalize when it comes to these groups.

The Alt-Right and the neo-Nazis cannot be confused with every conservative Republican out there any more than the Alt-Left and the Antifa can be confused with every liberal Democrat. All of these labels are divisive and painting everyone with a broad brush is a lazy generalization. But this isn’t what the media is telling us. Instead, the mainstream media is pouring gasoline on this fire on a daily basis and they’re polarizing our country even more.

Most of us are decent human beings who have no argument with our fellow Americans. We have a lot more in common than this noisy minority and if we could respectfully find those points of agreement, we could, perhaps, find peace amongst our neighbors once again.

I only hope that we haven’t gone so far down this road that there’s no way back.

I really want to know what you think about this matter, too. Share your opinions in the comments section at the end of the article. Remember, this is a heated topic, so please remain civil. Racial slurs will be redacted.