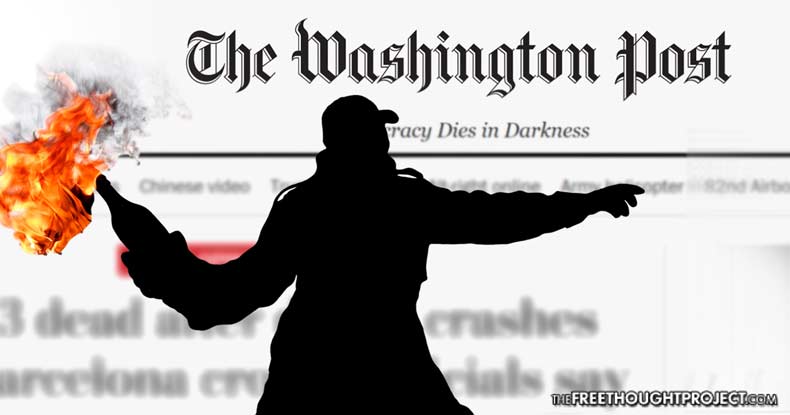 As extremism begins to grip American society on both sides of the ideological line, it’s worth noting that the mass media has been a catalyst for the sharpening of radical divide across the United States. Not since the Civil Rights-era has there been such a distinctly divided American nation. The Washington Post is right in the middle.

The violence witnessed in Charlottesville was indicative of a larger ideological battle that has, until recently, largely been played out in mass and social media, as the non-stop barrage of race-baiting news only serves to capitalize on the strife for clicks — ie increased revenue — at the expense of maintaining a civil society.

One can pinpoint the drastic recent sharpening of ideological divisions in the US to the killing of Michael Brown in Ferguson, Missouri. In many ways, Brown’s murder was a catalyst to the divisive nature of American society that we are seeing play out in the streets today.

What began as online battles between people that believed Brown to be a victim, and those that claim he was a “thug” have now taken on a new life, as we witness a drastic sharpening of identities. Make no mistake that what we saw in Charlottesville last weekend was simply the beginning of a hardening of conflict solidarity, and which could inevitably result in continued violence and death.

The question now becomes: How did America come to resemble Weimar Germany – with socialist white nationalists engaged in violent altercations resulting in blood in the streets?

While racism has never left the proverbial building here in the US, the main drivers of the conflict actions now being seen are mainstream corporate media. After pushing identity politics en masse onto the American psyche, emboldened by extremist ideology, the systemic divisions of racial and ethnic groups have become the new norm, as the public discourse has been buried in the name of political correctness.

The stoking of racial tensions for profit, at the expense of an ongoing and continuous healing of racial division, has without question gripped the mass media and played a large roll in the hardening of racial and ethnic identities.

One need look no further than a recent op-ed published by the Washington Post, written by N.D.B. Connolly, an associate professor at Johns Hopkins University. Connolly breathlessly appeals to the left to engage in violence and rioting as a means of precipitating change – while ignoring the fact that this will simply result in an increase in identity solidarity for those targeted by the violence.

A never ending feedback loop of violence and death if you will.

The white nationalist riot in Charlottesville, a city that boasts “diversity makes us stronger,” made a lot of things clear. One of them is that generic solutions to the racial problem — bland affirmations of inclusiveness, tolerance and “free speech” — will no longer work. Indeed, they have never worked, at least not on their own. …

[I]n April 1968, amid a flurry of other “rocks,” riots shook American cities following the assassination of Martin Luther King Jr. It took that rolling unrest, not the promise of further economic growth, to spur President Lyndon Johnson and Congress to action. Within a week they had passed the Fair Housing Act.

Over the past century, liberalism, vexed by an ever-sharp, ever-cutting white supremacy, has needed these rocks. …

Segregationists have again assumed their pedestals in the Justice Department, the White House and many other American temples. Paper alone won’t drive them out. Start throwing rocks.

Rather than promoting peaceful solutions that de-escalate the increasing racial/ethnic strife, the Washington Post advocates ideas that will almost certainly result in more destruction, violence, and death in America.

With strict standards for vetting op-eds, one of America’s most popular publications — albeit largely just a US government propaganda rag — essentially endorses violence as a solution to these complex racial and ethnic issues. One can reasonably assume, that since the piece was vetted by WaPo editors, they clearly understood the significance of allowing the promotion of violence to the American public at large.

When what is considered one of the publications of repute in the US, to those caught in the mainstream matrix, publishes an advocacy of violence, it becomes clear that they are now advocating by proxy political violence.

Please share this article in hopes of awakening others to the realization that the mainstream media is distinctly complicit in the sharpening of conflict solidarity on both sides of the ideological line – an extremely slippery slope that is likely to result in a devolution of American civil society, rioting, and even politically motivated killing.

In the words of the immortal Dr. Martin Luther King, Jr.: