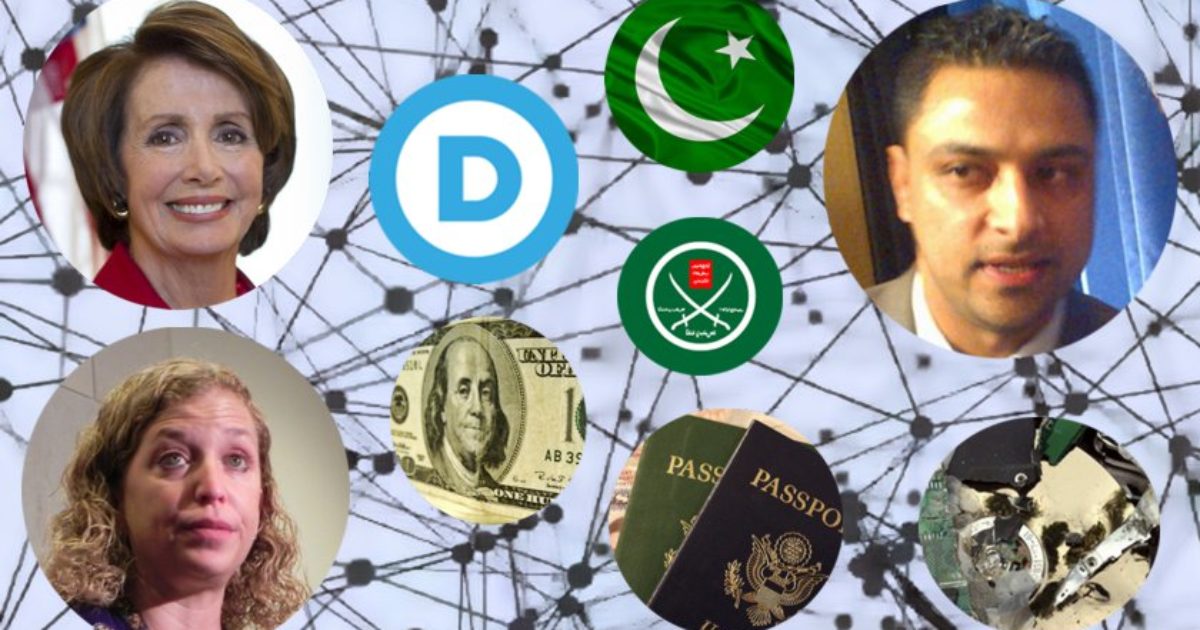 Well, the jig is up and two former aides for former Democratic National Committee Chair and Florida Representative Debbie Wasserman Schultz have been indicted on four counts of conspiracy against the united States.

Pakistani-born Imran Awan and his wife Hina Alvi were indicted on four counts of conspiracy in the US District Court for the District of Columbia by a federal grand jury on Thursday.

“Defendants AWAN and ALVI did unlawfully, willfully, and knowingly conspire, combine, confederate, and agree with each other to commit offenses against the United States,” including bank fraud, false statements, and unlawful monetary transactions, the indictment said.

An arraignment date has not yet been set, and a spokesman for the U.S. Attorney for the District of Columbia did not immediately respond to The Daily Caller News Foundation Investigative Group’s question about when Hina Alvi would become a fugitive if she does not return to the U.S. voluntarily, or whether officials would seek to extradite her from Pakistan.

In addition to lying on multiple mortgage disclosures, as an affidavit alleged at the time of Imran’s arrest, the indictment claims Hina lied by claiming medical hardship in order to withdraw hundreds of thousands of dollars from a retirement program.

In June, Wasserman Schultz admitted to security violations for years, but blamed network administrators for not stopping her.

She was warned of Imran’s threat on February 2, 2017, and did nothing about it.

In fact, when Imran was arrested as he was attempting to leave the country for six months to Qatar and then to Pakistan, then and only then, did Wasserman Schultz fire him. It’s clear that Awan would never have been terminated unless he was arrested.

At the time of his arrest, police also discovered smashed hard drives in his home.

It’s even more telling when she planned to pay him while he was in Pakistan.

Awan’s wife, who was also indicted, fled the country with the family’s possessions and their children and had hundreds of thousands of dollars waiting for her in Pakistan.

According to an FBI affidavit, on March 5, Awan’s wife, Hina, took their three children from school, packed all their possessions and $12,000 in cash and left the country for Pakistan, where hundreds of thousands of dollars were waiting for her.

The FBI claims that money was obtained by Awan through mortgage fraud and then wired overseas.

Like Awan, Hina had a return ticket for six months, but the FBI says they do not expect her to return.

Both Imran and Hina were Wasserman Schultz’s only IT staff at the time the House Sergeant-At-Arms banned them.

Awan retained Chris Gowen, a longtime aide to former President Bill Clinton and former Secretary of State Hillary Clinton, to represent him shortly after his arrest. Gowen has claimed in media interviews that Alvi left the country with the children only because of lost jobs and the high cost of living in the nation’s capitol. Gowen told the Associated Press that the family lives “in squalor” in Pakistan.

Gowen also told The New York Times that the Awans wired series of large sums of U.S. dollars to Pakistan as part of a long-time plan to buy property there. The couple had a combined income of $360,000 a year and owned four properties in the Washington, D.C. area, public records show.

In January, Imran — while impersonating his wife, according to the FBI — wired $283,000 from the Wright Patman Congressional Federal Credit Union.

Even after Awan’s arrest in July, it is possible more money flowed to Pakistan. On Aug. 3, he sold a home for $617,000, according to public records. Gowen declined to say if the proceeds were wired to Pakistan.

The Awan’s didn’t just work for Wasserman Schultz though.

Among those in political office who employed the services of the Awans are at least 23 current and former Democrats in Congress. Here’s the list:

Imran Awan’s brothers Jamal and Abid also were on the House payroll at chief-of-staff level salaries.

I believe that Debbie Wasserman Schultz should also be indicted on charges of obstruction.

However, I’m glad to hear that at least some of these people tied to the Muslim Brotherhood have been indicted. Now, let’s see if they will be found guilty and given justice.