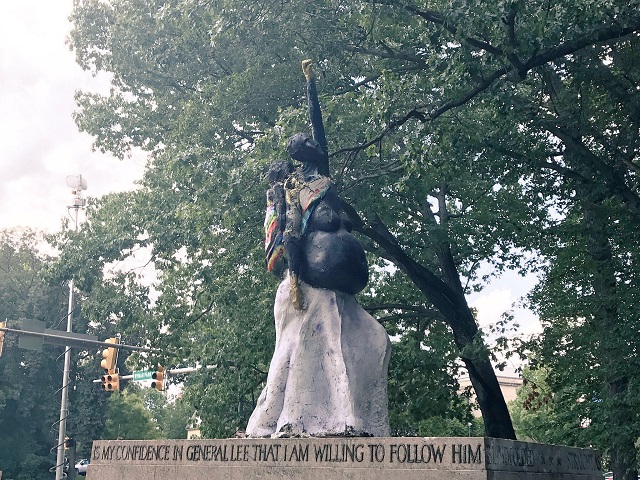 A statue of Robert E Lee in Baltimore was taken down this week only to be replaced by a “lady liberty of black power.”

Artist Pablo Machioli and a few of his friends erected a papier-mache statue of a pregnant black woman holding her fist into the air, to stand in front of the Lee and Jackson statue. The statue is adorned with a rainbow sash, a baby on her back, and her raised fist is coated in gold glitter.

According to the Baltimore Sun, the statue is called “Madre Luz,” or “Mother Light” in Spanish.

Here’s video of the statue being carried in:

Here’s video of the statue being put up:

Baltimore mayor Catherine Pugh reportedly said she has “no position” on the “lady liberty of black power” statue being put up.

While the Robert E. Lee statue could have stayed up for centuries due to its fine craftsmanship, the “lady liberty of black power” was destroyed overnight either due to rain or being tipped over.

Trying to figure if statue topple is vandals or weather. No witnesses to vandalism. Material wet from previous rain. @wusa9 pic.twitter.com/KItv1XzyFA

Baltimore police at downed statue to investigate poss. destruction of property. Officer says "looks like" someone pushed over @wusa9 pic.twitter.com/UFiECYh9Je