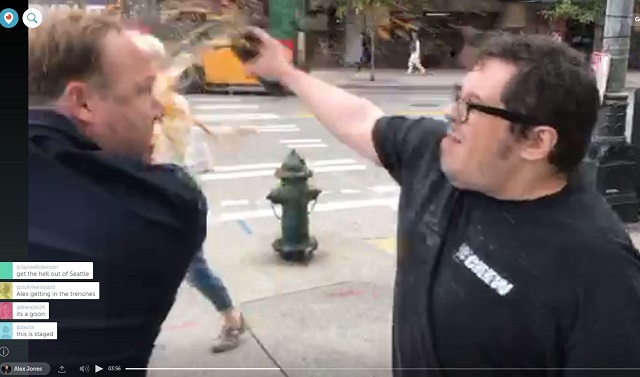 This is the face of The Resistance.

While walking in the streets of Seattle, Alex Jones was attacked by a giggling troglodyte who threw “boiling hot coffee” on him.

No media outlets are condemning the assault and most are actually celebrating it: The Seattle Police Department reacted to the news by mocking Jones:

We haven't received any official reports. As far as we know that could be an actor playing Alex Jones.

What we have in this country today, then, is both anarchy (the failure of the state to enforce the laws) and, at the same time, tyranny—the enforcement of laws by the state for oppressive purposes; the criminalization of the law-abiding and innocent through exorbitant taxation, bureaucratic regulation, the invasion of privacy, and the engineering of social institutions, such as the family and local schools; the imposition of thought control through “sensitivity training” and multiculturalist curricula, “hate crime” laws, gun-control laws that punish or disarm otherwise law-abiding citizens but have no impact on violent criminals who get guns illegally, and a vast labyrinth of other measures. In a word, anarcho-tyranny.

…The laws that are enforced are either those that extend or entrench the power of the state and its allies and internal elites … or else they are the laws that directly punish those recalcitrant and “pathological” elements in society who insist on behaving according to traditional norms—people who do not like to pay taxes, wear seat belts, or deliver their children to the mind-bending therapists who run the public schools; or the people who own and keep firearms, display or even wear the Confederate flag, put up Christmas trees, spank their children, and quote the Constitution or the Bible—not to mention dissident political figures who actually run for office and try to do something about mass immigration by Third World populations.

The left wants a second civil war. All their talk of “tolerance” only means conservatives must tolerate their society being destroyed and their country being stolen out from under them. If these leftists manage to seize control of the state, they’ll be about as “tolerant” as Joseph Stalin.